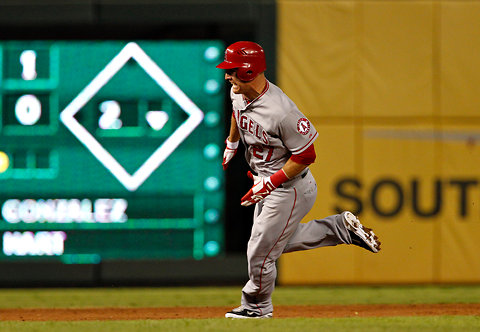 Tony Gutierrez/Associated Press With his speed and good judgment on the bases, Mike Trout increased his contribution to the Angels’ offense.

On Thursday, the American League will announce the recipient of its Most Valuable Player award. The winner is likely to be Miguel Cabrera, the Detroit Tigers star who won the league’s triple crown by leading in batting average (.330), home runs (44) and runs batted in (139).

It might seem as if these statistics make Cabrera, the first triple crown winner in either league since 1967, a shoo-in for the M.V.P. But most statistically minded fans would prefer that it go to another player, Mike Trout of the Los Angeles Angels.

The argument on Trout’s behalf isn’t all that complicated: he provided the greater overall contribution to his team. Trout was a much better defensive player than Cabrera, and a much better base runner. And if Cabrera was the superior hitter, it wasn’t by nearly as much as the triple crown statistics might suggest.

It is an argument enabled by the improved ability to measure different elements of the game – defense, base running, and situational hitting – that were once weak points of statistical analysis.

Take Trout’s base running, for example. The “Moneyball” paradigm is sometimes associated with de-emphasizing the value of the stolen base. In large part, this is because being caught stealing hurts a team about twice as much as a successful stolen base attempt helps it. Thus, a player who steals 20 bases, but who was caught stealing 10 times, provides little added benefit to his club.

But this wasn’t a problem for Trout, who was successful on 49 of 54 stolen base attempts, one of the highest percentages ever for a player who attempted to steal so many times.

Trout, with his speed, aggressiveness and good judgment on the bases, was also able to help the Angels in other ways, such as by scoring more often from second base when one of his teammates got a base hit. With the more detailed data available on everything that happens on the field, it is now possible to quantify these contributions as well.

Over all, Trout contributed about 12 additional runs on the basepaths when compared with an average runner. The bulky Cabrera, by contrast, cost the Tigers about three runs on the bases.

Trout is also the much better defensive player. Major League Baseball now records in detail exactly where each batted ball is hit. The best systems for measuring defense rely on this physical evidence, rather than pure statistical inference, in order to see whether a player makes more or fewer plays than his peers at the same position.

One of these systems, Ultimate Zone Rating, estimates that Trout saved the Angels 11 runs with his defense in the outfield. Cabrera, a clumsy defender at third base who is more naturally suited to play first base, cost the Tigers 10 runs with his.

Between his defense and his base running, therefore, Trout was about 35 runs more valuable to the Angels than Cabrera was to the Tigers. By contrast, the 14 additional home runs that Cabrera hit (44 against Trout’s 30) were worth about 22 extra runs for the Tigers, based on measures that convert players’ contributions to a common scale.

Trout also made his offensive contributions in a more difficult ballpark for hitters. Detroit’s Comerica Park once had a reputation as a pitcher’s haven, but that has not really been true since the Tigers moved the fences in in the mid-2000s.

Angel Stadium of Anaheim, instead, is more pitcher-friendly, measuring 387 feet to the left-field power alley, one of the deepest distances in the majors.

Although there are statistical formulas to adjust for these “park effects,” it is now also possible to measure the impact of ballpark dimensions through a visual inspection of the data.

Of the 159 home runs hit at Comerica Park this season, for example, about 20 or 25 were not hit deep enough to leave the field at Angel Stadium, according to ESPN’s Home Run Tracker. Another 15 or 20 would have been borderline cases.

Angel Stadium is shallower in straight center field, making up for much of the difference, but since most of Cabrera’s home runs came to the power alleys, playing in Anaheim would likely have hurt his statistics on balance. Trout, who hits to all fields, is less sensitive to his ballpark, and had slightly better overall numbers than Cabrera in road games.

What about Cabrera’s superior R.B.I. total? Isn’t that evidence that he helped his team when it had the most on the line?

Even if one believes this, however — that there is little predictive power in clutch hitting statistics — one could nevertheless form a coherent argument that they deserve consideration in the retrospective evaluation of players, such as in determining who had the more valuable season. A grand slam still counts more than a solo home run.

Furthermore, leading off the inning, as Trout frequently did, represents a sort of clutch situation of its own. Advanced statistics have validated the conventional wisdom that getting the leadoff hitter on base greatly increases a team’s chance of success: a plate appearance to lead off the inning is more than twice as important as one with two outs but nobody on base.

Trout was very good when leading off the inning, hitting .339 with a .398 on-base percentage. (He also stole 16 bases with nobody out.) Cabrera hit .301 with a .342 on-base percentage in leadoff situati
ons. That counteracts much of the advantage from Cabrera’s superior performance with runners on base.

In fact, there are now systems, like Win Probability Added, that measure all aspects of clutch performance in a comprehensive way. They account not just for the number of runners on base and the number of outs, but also the game score and the inning. A grand slam when a team trails by three runs with two outs in the bottom of the ninth turns a near-certain loss into a win, giving a player maximal credit by this system. A grand slam when a team already leads 7-0 gets little credit, since the game is already in hand.

According to this measure, Trout was actually slightly more valuable than Cabrera as an offensive player, considering the timing of his contributions. Add in his defense and base running, and it isn’t all that close a call.

It may seem hard to argue against a player who won the triple crown. But Cabrera’s numbers, while worthy of an M.V.P. award in many seasons, weren’t historically great. His batting average, R.B.I. and home run totals would also have qualified for the American League’s triple crown in 2008. Before that, however, you would have to go back to 1972 to find a year in which his numbers were good enough to lead the league in all three categories.

There is also the fact that Cabrera’s Tigers made the playoffs, while Trout’s Angels did not. But the Angels won more games (89) than the Tigers (88), missing the playoffs because they played in a harder division. Trout, moreover, began the year in the minors; the Angels went 81-58 in games in which he participated, equivalent to their winning 94 games over a full season.

Still, the real progress in the statistical analysis of baseball is in the ability to evaluate the contributions that a player makes on the field in a more reliable and comprehensive way.

Perhaps 10 or 20 years ago, when evaluations of base running, defense and clutch hitting were murkier, stat geeks would have argued that Cabrera deserved the M.V.P. on the basis of the hard evidence.

Now that some of the “intangibles” have become measurable, we know that Trout did more of the little things to help his team win.

It’s the traditionalists who are using statistics in a way that misses the forest for the trees.

A version of this article appears in print on 11/15/2012, on page B13 of the NewYork edition with the headline: M.V.P. Debate Goes Beyond The Numbers in a Box Score.