On Wednesday night, both the Miami Heat and San Antonio Spurs closed out their series in five games. Through the end of these second-round series, the Spurs have been outscoring their opponents by an average of 9.9 points per 100 possessions, the Heat by nine points per 100 possessions. Both of those marks lap the rest of the field — the next closest team in the playoffs is the Oklahoma City Thunder at +4.5. The Heat and the Spurs have been the best in these playoffs by a wide margin.

Those point-per-possession metrics are important; they account for pace and average margin of victory or defeat. That means they offer a more insightful understanding of a team’s strength than its record can. And once we understand a team’s strength, we can better guess its future success.

By that metric, the Spurs and Heat are converging. After a seven-game slog against the Dallas Mavericks in the first round, the Spurs had a per 100 possession point differential of +3.4. From there, they seem to have swelled, getting stronger and stronger as they dismantled the Portland Trail Blazers. The Heat’s dominance looks inverted. First, they swept the Charlotte Bobcats with a per 100 possession point differential of +10.1. But after trampling the Brooklyn Nets in the first two games of the second round, they’ve struggled to separate themselves and their point differential has been slowly creeping downward.

The chart below shows the cumulative per 100 possession point differential of each team going into the second round and after each second-round game. 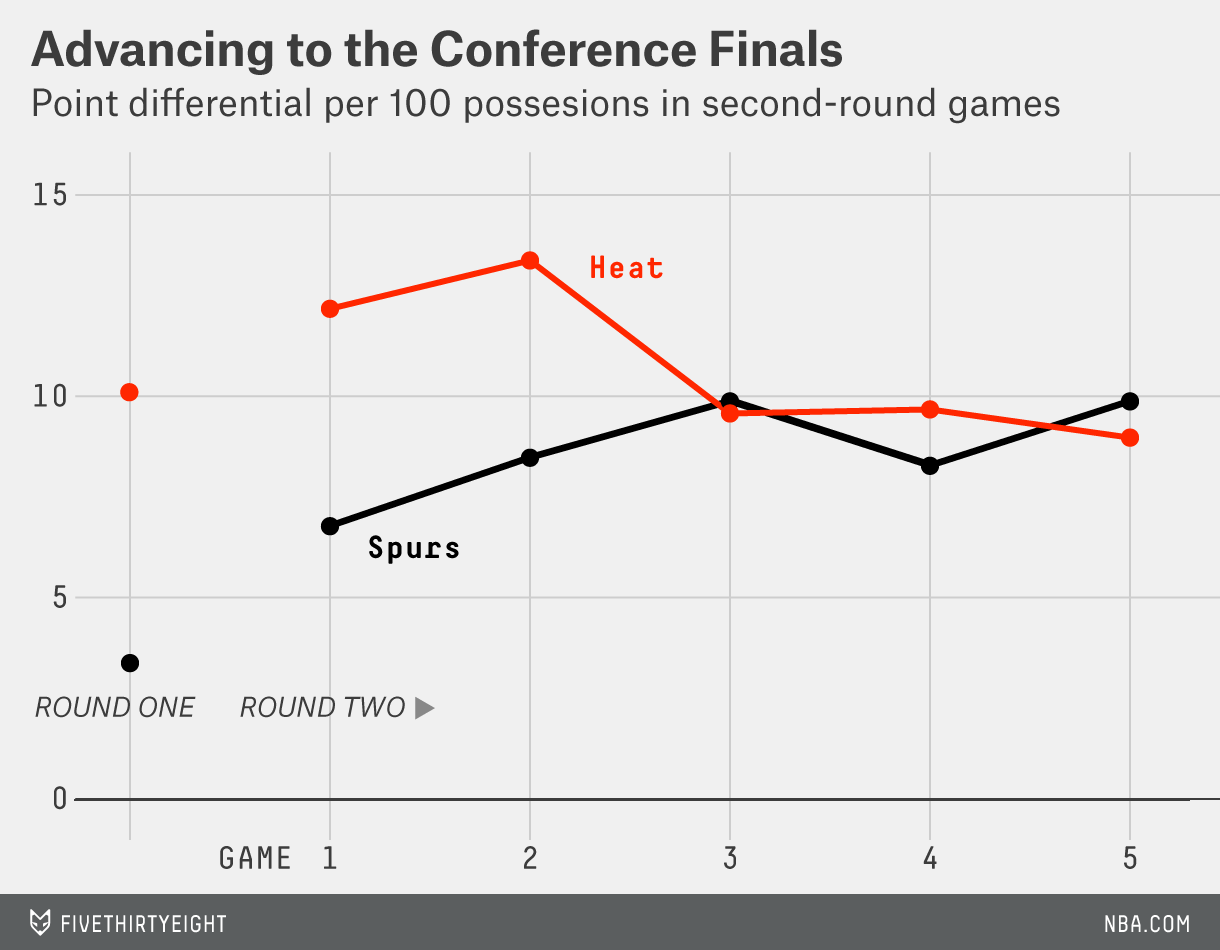 Both teams swung upward in their two home games to start the round. But as the Spurs’ point differential has continued to climb, albeit at a slightly slower trajectory, the Heat have been trending downward from their playoff peak to meet them. Quality of competition is certainly a factor, and the Spurs’ first-round point differential is heavily influenced by having played the Mavericks, a much more successful team during the regular season than the Charlotte Bobcats. But the Spurs’ second-round opponent, the Trail Blazers, had a Simple Rating System mark of 4.44 during the regular season, sixth-best in the league. The Nets were -1.58, 20th in the league.

Of course, both teams still have plenty of obstacles, but playing at such a high level bodes well for the next round (though which teams they face may matter even more). But the directions their performances have been trending implies that the Spurs might be moving on with slightly more momentum than the Heat.