On Sunday, injuries at the NFL’s most valuable position — to two of history’s most prolific passers — radically altered the landscape of the season.

Sean Payton is about to coach only the second game of his NFL career without a healthy Drew Brees, who is out six to eight weeks with an injury to his right (throwing) thumb that will require surgery. With Brees at the helm, Payton’s record is 119-72, and the pair has the second-most wins of any QB-coach combo in NFL history. Now, Payton’s quarterback is expected to be Teddy Bridgewater, who last started an NFL game that mattered in the 2015 season.1

In Pittsburgh, the situation is even worse: Ben Roethlisberger will undergo season-ending surgery on his throwing elbow. Steelers coach Mike Tomlin is 115-60-1 with Roethlisberger starting, the fourth-most wins of any QB-coach combo. Tomlin has had to guide his team through Big Ben’s missed time before, going 10-8 in games without Roethlisberger. But those previous fill-ins included veterans Charlie Batch, Byron Leftwich and an over-the-hill Michael Vick. Current backup Mason Rudolph, a third-round pick in the 2018 NFL draft, has never started an NFL game.

What can we expect from each team with their current backup QBs? The Saints still have a coin-flip’s chance to make the playoffs, according to FiveThirtyEight’s NFL prediction model. But the Steelers’ playoff chances are now practically nil — down to just 8 percent.

Even with Roethlisberger, the Steelers had started the season so poorly that, had he not gotten hurt, they still would have been projected for just 7.54 wins, or a record of roughly 8-8 — likely falling short of the postseason again. With Rudolph under center, the Steelers’ outlook drops by 2.47 expected wins. Because Rudolph has not yet started a game, the model projects his performance based purely on where he was drafted (the 3rd round) — which could be too bearish an estimate. But as things sit, Rudolph is expected to perform at only 36.6 percent of Roethlisberger’s Elo level, a rolling average of recent performances that incorporates both passing and running. 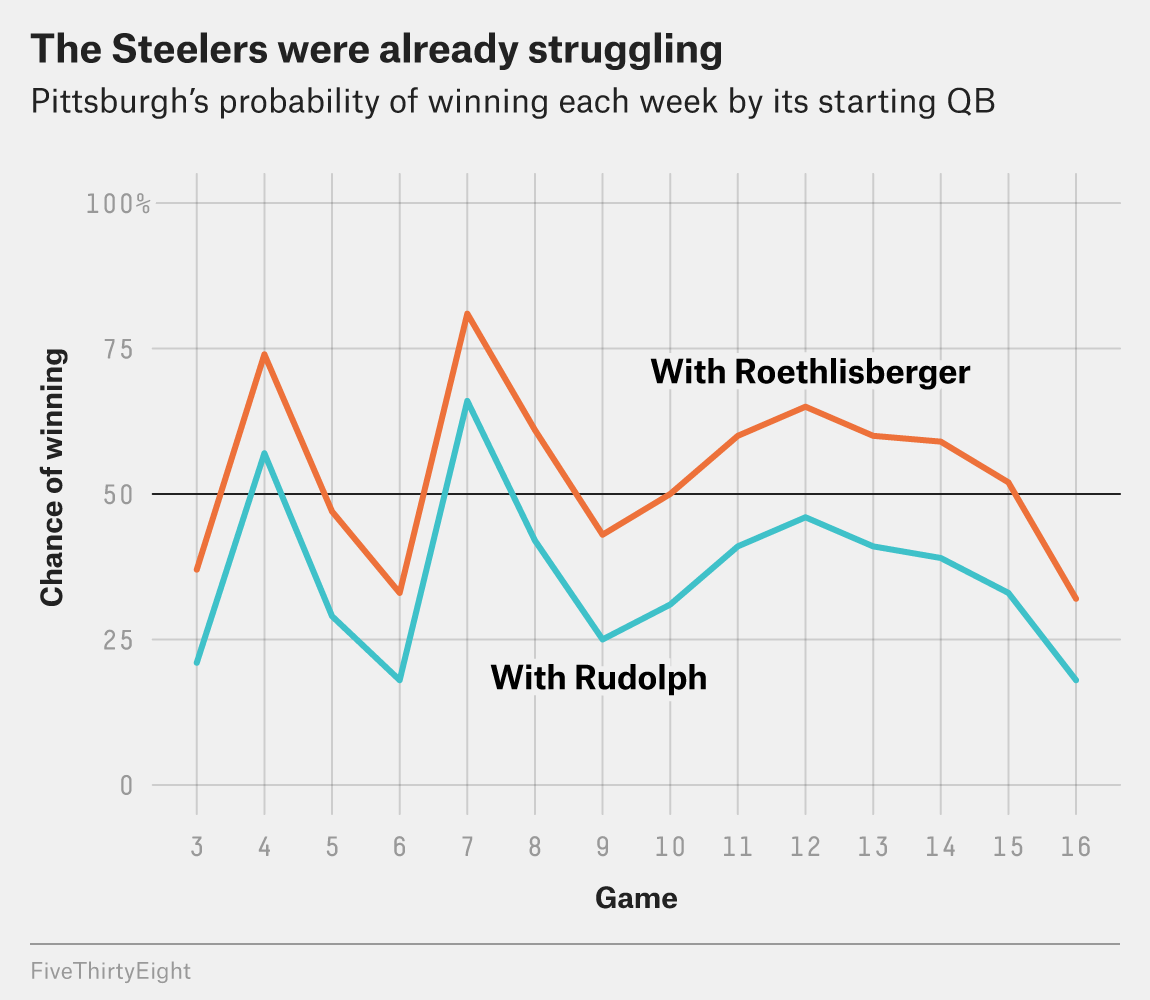 On paper, the Saints are in much better shape with their backup in Bridgewater, who is expected to perform at 56.5 percent of Brees’s level.2 With Brees starting every remaining game, the Saints would have been the seventh-strongest team in the league by Elo, with an expected win total of 9.62. With Bridgewater in, the Saints drop to 21st overall — and he lowers their projected win total to 8.93 for the full season. 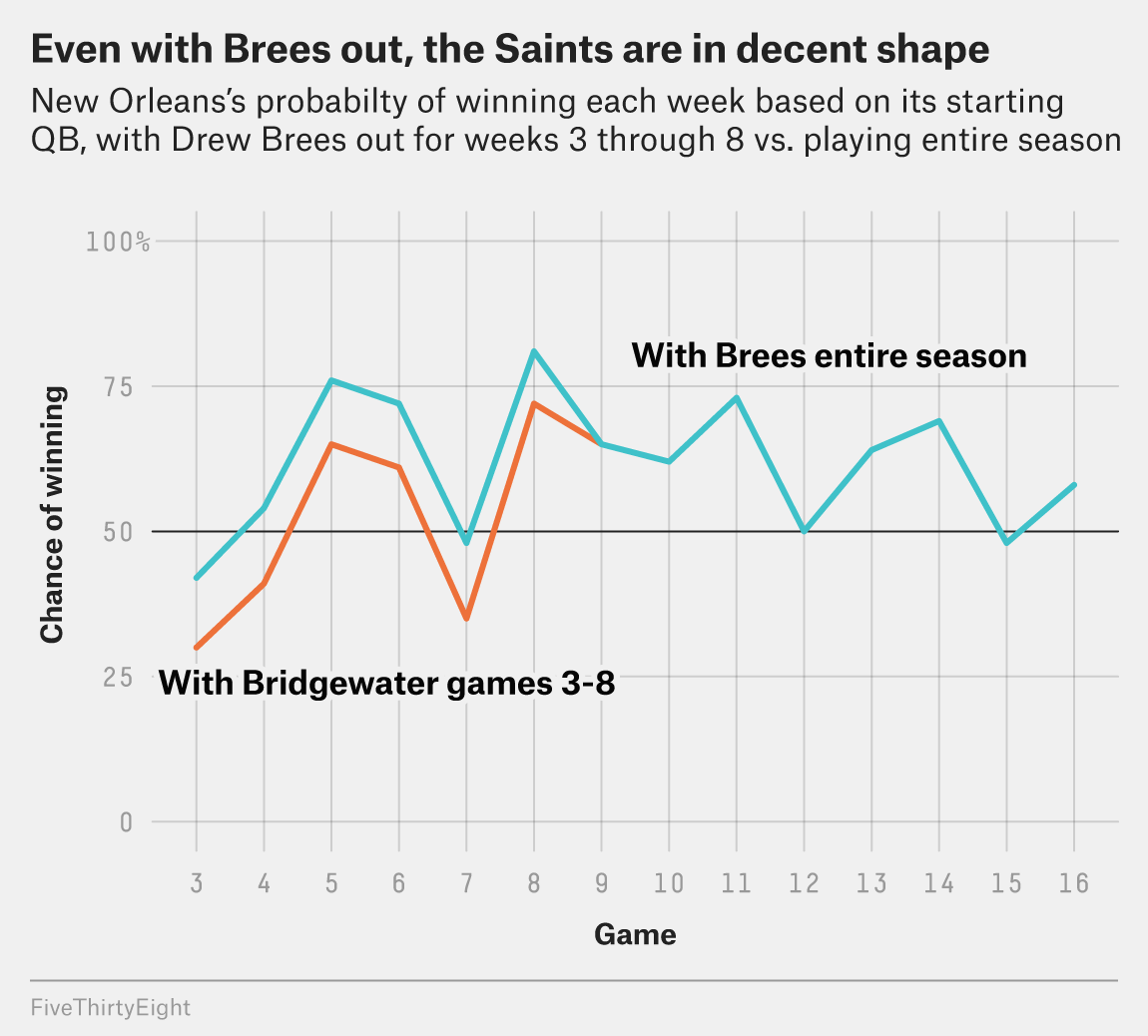 But Bridgewater’s performance is almost impossible to project, given that he’s not the same player after recovering from the “horribly grotesque” injury that he sustained in 2016. Though the sample size is small — only 53 passes to date — Bridgewater’s returns as a Saint have been poor: He has notched nearly 2 yards fewer per pass attempt than as a Viking and has performed worse both by passer rating and ESPN’s QBR.

The Saints could turn to a Sean Payton favorite, quarterback and Swiss Army knife Taysom Hill, who receives zero Elo points because of his lack of NFL starts and his undrafted status. Payton, though, sees the next Steve Young. Hill is already 29 and in his third season of being groomed by Payton, but Young didn’t begin his Hall of Fame-caliber play as the 49ers’ primary starting QB until age 30. So if it’s ever going to happen for Hill, why not now?

For the Steelers, although Roethlisberger says he’s returning from this injury to finish out his contract, there are no guarantees. Eerily, the playing career of the last great Steelers quarterback, Terry Bradshaw, ended with an almost identical injury in the last game of the 1983 season. And Bradshaw also said he’d come back after his surgery, but he never did. He was 35. Roethlisberger is 37.

But what if the Steelers were able to get a veteran quarterback for next-to-nothing in a trade? And what if that player is a two-time Super Bowl champion, like Roethlisberger? The Giants are finally turning the page on the Eli Manning era, and it would be far less awkward for them to hand the team to rookie Daniel Jones with Manning gone than with him holding a clipboard. Elo projects Manning at nearly twice the value going forward this year as Rudolph, and he would be the AFC North’s third-best quarterback today in terms of Elo, ahead of Andy Dalton.

It appears, though, the Steelers lack the cap room to trade for Manning or even a modestly paid veteran QB. Pittsburgh sent a first-round pick to Miami on Monday for cornerback Minkah Fitzpatrick, so it doesn’t appear that the Steelers are intent on tanking. They’re probably just stuck with the uncertainty of a QB prospect who has yet to start a game.