After much hand-wringing over how many Kansas City Royals would start the MLB All-Star Game, the final fan voting tallies were released late Sunday, and the rest of America can breathe a sigh of relief. The tabulation revealed that “only” four K.C. players — Alex Gordon, Lorenzo Cain, Alcides Escobar and Salvador Perez — will be slotted into the lineup by the fans.

(Two Royals relief pitchers, Wade Davis and Kelvin Herrera, were added by the players and Royals manager Ned Yost, who is managing the American League this year. Third baseman Mike Moustakas has a chance to become the fifth Royal chosen by the fans in the final round of voting, which ends Friday.)

It was a far cry from the staggering eight Royals who were in position to start the game for the American League a few weeks ago, a number that sparked accusations of improper ballot-box stuffing (which MLB officials denied). Had the Royals sustained that number — or even one fewer, if we exclude designated hitters, as Baseball-Reference’s yearly table does — it would have been historic. Since baseball ditched dual All-Star Games in 1963, no team has garnered more than five non-DH position-player starters in one midsummer classic.

Kansas City almost certainly didn’t deserve that many players on the lineup card. Based on the historical relationship between a team’s All-Star Game position-player starters and its record, a team with seven starters (again, excluding the DH) should have won something like 68 percent of its games through midseason, which would come out to 110 wins over a full season.1 That’s as many as the juggernaut 1927 Yankees had.2

But the Royals aren’t the ’27 Yankees. Fangraphs projects that the Royals will finish the year with 92 wins if they maintain their first-half form. 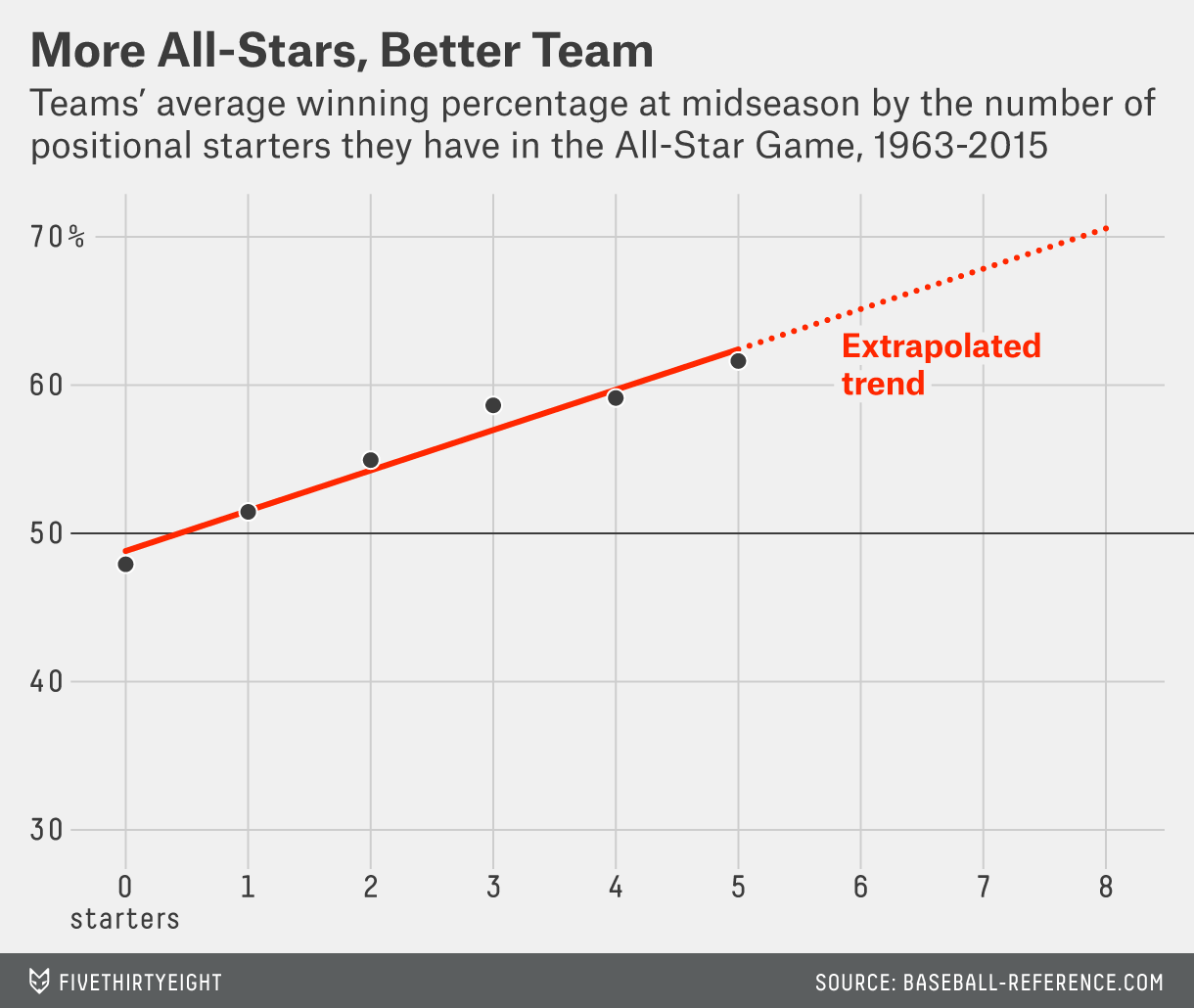 As it is, four All-Star starters is an impressive count. Only 14 teams since 1963 have had that many position players as starters.

You can quibble over how many starters the team actually deserved. According to Fangraphs’ version of wins above replacement (WAR), only left fielder Gordon leads American Leaguers at his position thus far in 2015. And based on historical teams with the same midseason record, there was only a 1.9 percent probability that the Royals would get four or more starters. The voting power of Kansas City’s fans certainly seems to have exceeded the performance of its players.

But the Royals do boast five players who rank among the AL’s top four at their position in WAR (Gordon, Cain and Perez, plus Eric Hosmer and Moustakas). And Kansas City’s record is also very much in keeping with those of the four-starter club’s other members: As of Sunday, their winning percentage on the season (58.2 percent) was only marginally lower than the average first-half winning percentage (59.1 percent) for all teams with four All-Star Game starters since 1963.

Yes, the Royals fan base was particularly mobilized during this season’s voting cycle, perhaps out of leftover enthusiasm from last year’s World Series run (which came after years of futility). But maybe that’s a key part of the story as well. From 2001 through 2013, K.C. didn’t have a single All-Star starter; less than a month ago, it looked like they’d have eight in one year. Sympathy turned into backlash. The fans’ votes eventually found the equilibrium between those extremes, and that the Royals ended up with four starters isn’t so crazy after all.