Under the leadership of Howard Dean, the former governor of Vermont who was chairman of the Democratic National Committee from 2005 to 2009, the Democrats executed a move that came to be known as the 50-state strategy.

The strategy was simply to run viable candidates in as many states and Congressional districts as possible, waiting for good opportunities to arise. Certainly, the Democrats were still going to devote more resources to traditional swing regions like central Ohio, or the Interstate 75 corridor in Florida, than they might to other areas. But, Mr. Dean’s strategy implied, distributing $250,000 to make an aspiring Democratic congressman viable in Republican-leaning areas like northeast Mississippi or western Idaho might produce a superior return on investment compared with spending the same money on a candidate in a swing district where several million dollars had already been invested and where it might make little impact at the margins. 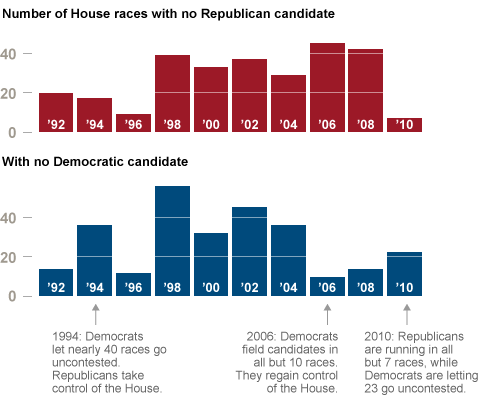 This year, however, it is Republicans who have the broader playing field. According to research by Derek Willis of The New York Times, the Republicans will nominate candidates in 428 Congressional districts this year, leaving only seven races — all in overwhelmingly Democratic areas, like the South Side of Chicago — uncontested. This contrasts sharply with 2006, when Republicans left the Democrats unchallenged in 45 districts, or 2008, when they failed to nominate a candidate in 42 races.

The Democrats, for their part, are not doing badly: They will have a candidate  on the ballot in 412 districts –  all but 23 — which is better than their recent historical average. Still, this is a step down from 2008, when they left just 14 seats uncontested.

Shifts in the number of seats that each party is contesting can sometimes be a leading indicator for political waves. In 2006, for example, the year that Mr. Dean’s strategy came into fruition and the Democrats made significant electoral gains, Republicans went from leaving 29 Democrats unchallenged to 45. In 1994, by contrast, Democrats went from leaving 14 races uncontested to 36, before the party faced an infamous 54-seat reversal in the elections that November.

The relationship is probably more correlative than causal: It can be hard to persuade viable candidates to run for Congress unless they are convinced that they have at least some chance of winning, and in 2010 — a year that is shaping up to be both anti-Democrat and anti-incumbent — those currents would tend to favor Republicans. Still, in a cycle in which there is no lack of auspicious indicators for Republicans, this is yet another sign that they may be poised to make a comeback.