Two of my favorite analysts, Rhodes Cook and Josh Putnam, have a good debate going about just how plausible it is that a Republican who is not currently running for president could enter the race later and potentially win it (probably necessitating a brokered convention). Those of you who follow my Twitter feed will know that I think Mr. Cook has the stronger side of the argument; I think there is a small but nontrivial chance that the Republican nominee could be someone like Jeb Bush, Paul Ryan, Mitch Daniels, Tim Pawlenty or Chris Christie. (In fact, I was speculating about these scenarios as long as a month ago.)

I’m not going to describe the means by which this would occur; Mr. Cook covers that in great detail. Instead, I’m more interested in the motive.

The motive is simple: Republicans are dangerously close to having none of their candidates be acceptable to rank-and-file voters and the party establishment. It’s not clear what happens when this is the case; there is no good precedent for it. But since finding a nominee who is broadly acceptable to different party constituencies is the foremost goal of any party during its nomination process, it seems possible that Republicans might begin to look elsewhere.

Unfortunately, this particular question is not asked all that often by pollsters (a shame, since it’s a really important question). So I cannot offer categorical proof that this situation is unprecedented. Gallup did pose the question to both Republican and Democratic voters in 2007, however, and the results from that poll suggest that the predicament that Republicans now find themselves in is at a minimum unusual. In 2007, both Democrats and Republicans had four broadly acceptable candidates rather than two: 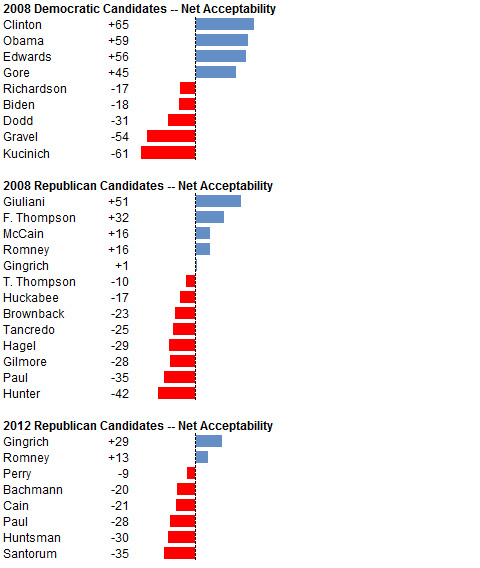 Of course, a party does not need four acceptable candidates: it needs only to settle on one. But the two Republicans who fit this description for the time being, Mr. Romney and Mr. Gingrich, might become unacceptable to a majority of the party depending on how nasty the nomination fight gets.

Mr. Romney is already considered unacceptable by 41 percent of Republican voters, and his favorability ratings have been fading recently. Although he is still O.K. for now, he does not have all that much margin to spare. It’s plausible that his ratings could turn negative if he runs a negative campaign, as other candidates begin to criticize him, or if he makes one or two significant gaffes.

Mr. Gingrich has a fair amount of personal baggage and his favorability ratings were quite poor with Republican voters at points earlier in this cycle. He is now taking fire from all sides, including from Mr. Romney, from other candidates, like Ron Paul, and from portions of the conservative media.

But say that Mr. Gingrich survives this, as he certainly could. He wins Iowa and then either wins New Hampshire or finishes a respectable second there. He continues to lead in national polls of Republican voters, as he does now.

What happens then? One possibility — probably the most likely one — is that Mr. Gingrich wins South Carolina, wins Florida and holds on to win the Republican nomination.

But Mr. Gingrich might nevertheless be considered an unacceptable choice by much of the party establishment. That would put us in uncharted waters. There hasn’t really been a case in the past where a candidate who held the national polling lead after New Hampshire was considered unacceptable by the party elite. Most of the time, the establishment (as measured by endorsements) and the rank and file (as measured by support in national polls) have agreed upon a candidate by that point. 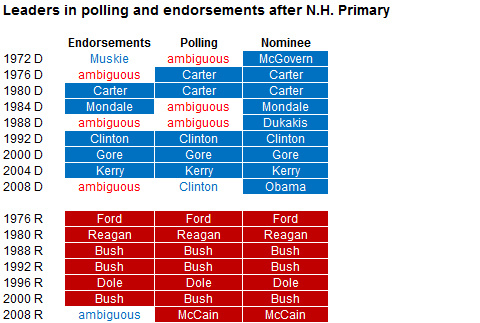 There have been six cases in recent decades in which there was no clear front-runner after New Hampshire. These are discussed briefly below.

1972 Democrats. Edmund S. Muskie, the clear favorite of the party establishment, won both Iowa and New Hampshire. The performances were perceived as disappointing, however, and Mr. Muskie was at only about 20 percent in national polls (still good enough to put him in a rough tie with Hubert H. Humphrey). A third candidate, George McGovern, who had helped to design the reformed nomination rules and cagily exploited them by dominating in caucus states, won the nomination despite taking only about 25 percent of the national popular vote.

1976 Democrats. Party leaders were slow to endorse any candidates in 1976, but Jimmy Carter surged to the national polling lead after wins in Iowa and New Hampshire. Although Mr. Carter was a relatively obscure figure who was not beloved by the party establishment, he nevertheless took the nomination. This is among the more favorable precedents for Mr. Gingrich, although it differs slightly from this year in that there was no consensus among the establishment about whom to support in place of Mr. Carter.

1984 Democrats. Walter Mondale was the clear favorite of the establishment and seemed headed for an easy nomination after a dominant performance in Iowa. The favorable media attention to Gary Hart’s second-place showing, however, gave him momentum that he rode to a victory in New Hampshire, after which he drew into a rough tie with Mr. Mondale in the national polls. Mr. Mondale eventually prevailed in a close race.

1988 Democrats. Michael Dukakis, the eventual nominee, had won New Hampshire but had lost Iowa to Dick Gephardt. Mr. Dukakis was roughly tied for the endorsement lead with Al Gore, and was roughly tied in the national polls with Jesse Jackson. Thus, Mr. Dukakis was in the strongest overall shape, although he was not dominant in any one category, so the nomination took some time to sort out.

2008 Democrats. This was a strange case. Hillary Rodham Clinton regained the national polling lead after her comeback win in New Hampshire. However, Barack Obama — who had once considerably trailed Mrs. Clinton in party support — announced a series of important endorsements from senators like John Kerry and Claire McCaskill in the week just after New Hampshire, making the question of who had the party establishment’s support ambiguous.

2008 Republicans. John McCain pulled into the national polling lead after his win in New Hampshire, although it took further wins in states like South Carolina and Florida before endorsers (who had long been split between Mr. McCain, Mr. Romney, Rudolph W. Giuliani and Fred Thompson) closed ranks around him.

Although there are some loose parallels to this year in the 1972 and 1976 Democratic primaries, none of them involved an acute conflict between the establishment and the rank and file of the sort we have this year between Mr. Romney and Mr. Gingrich. It is not a year like 2008, when the Democrats had at least two broadly acceptable nominees, in which you’d expect to see a brokered convention or a dark-horse candidate emerging. Instead, it’s a year like this one, in which all the choices are unacceptable to some degree or another.

There are deterrents, of course, to a candidate like Mr. Bush or Mr. Ryan entering the race late. Most notably, there is no guarantee that they would succeed. If they tried and failed, that could be an unmitigated disaster for the Republican Party, undermining its eventual nominee. But the odds of a dark-horse candidate or brokered convention will increase to the extent that any of the following conditions hold:

1a. Mr. Gingrich leads the delegate count, but does not have more than about 50 percent of delegates.

1b. Mr. Gingrich holds more than 50 percent of delegates but is involved in a significant gaffe or scandal at some point later in the campaign.

2a. Mr. Romney has performed poorly enough in the early states that he is no longer viable.

2b. Mr. Romney is viable but his unfavorability ratings have considerably increased to the point that he no longer qualifies as a consensus choice.

3. A factional candidate like Ron Paul holds 10 percent or 15 percent of the delegates.

All of these conditions seem plausible based on what we know right now, which is what leads me to believe that a brokered convention is plausible as well.