Now and then a Game 7 can be an anticlimax, like when the Kansas City Royals won the 1985 World Series by blowing out their cross-state rivals, the St. Louis Cardinals, 11-0 in the finale. But Game 7 of the Rangers-Capitals playoff series lived up to every inflated expectation. Like the previous six games of the series, Wednesday’s featured some great goaltending: Netminders Henrik Lundqvist of the Rangers and Braden Holtby of the Capitals combined to stop 72 of 75 shots (96 percent). And like the other six games, it was decided by one goal, with the Rangers coming back to win 2-1 on Derek Stepan’s overtime goal.

The Rangers have now played 14 straight one-goal games in the playoffs, an NHL record. All five games of their first-round series against the Pittsburgh Penguins were decided by one goal. So were the final two games of their Stanley Cup Final last year against the Los Angeles Kings.

What are the odds of a streak like this? More NHL playoff games are decided by one goal than you might expect. The NHL has become a low-scoring league — but also, the sudden-death playoff overtime format facilitates one-goal margins, since every game that goes to OT will be won by exactly one goal by one team or the other. 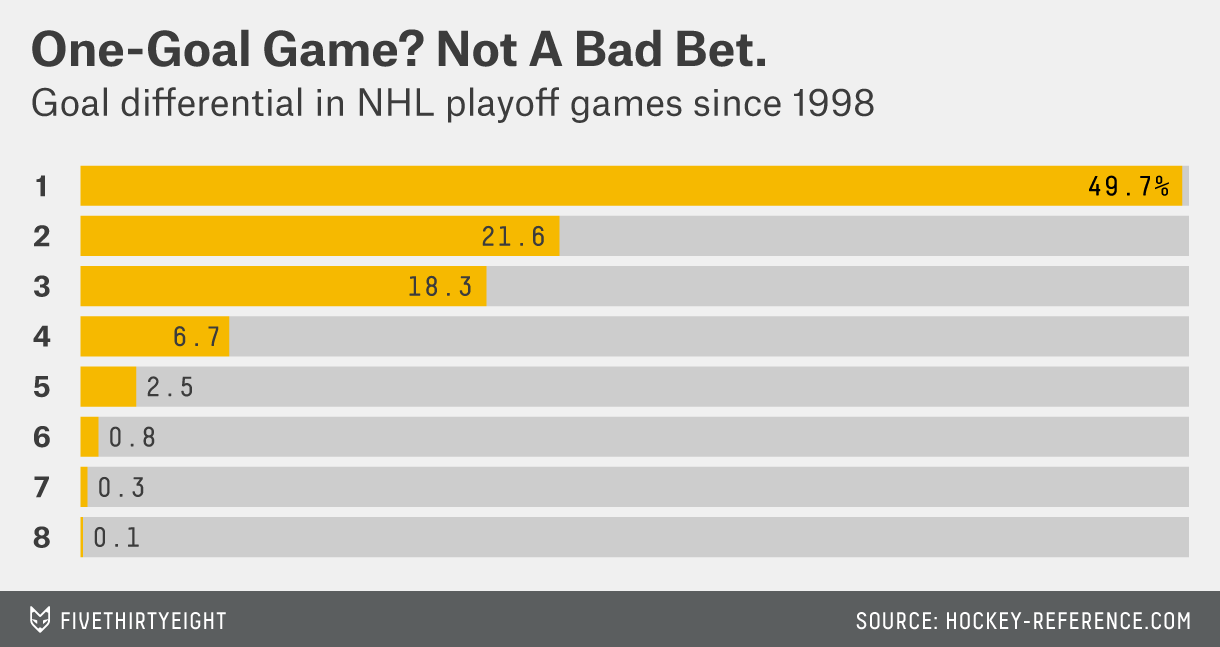 So playing 14 consecutive one-goal games is roughly equivalent to having a fair coin come up heads 14 times in a row. The probability of that is 1 chance in 16,384. This has been a pretty unlikely and uncanny streak for the Rangers.

You can quibble with that calculation if you like. The Rangers have a great goalie in Lundqvist, who might lead to tighter and lower-scoring games. They also have a pretty good offense, though, at least by contemporary standards, having tied for third in the NHL in goal scoring during the regular season. If you supposed that the probability of a Ranger playoff game being decided by one goal was 60 percent instead of 50 percent, the streak would still be unlikely: a 1 in 1,276 chance.

The Rangers have also come back from near-certain death. With 1:41 to go in the third period in Game 5 on Friday, they trailed 2-1 in the game and 3-1 in the series. Their chance of winning the game was down to about 4 percent, according to rinkstats.com, which means their chance of winning the series was around 1 percent.2 But Chris Kreider scored, then Ryan McDonagh did in OT, then the Rangers won Games 6 and 7.

Game 7 also contributed to the case for this having been one of the best playoff goaltending battles ever. In the series, Lundqvist and Holtby together had a .946 save percentage and a 1.71 goals against average. And based on the metric that I developed Wednesday, they combined for 2.4 wins above average relative to average playoff goaltenders. That ranks the series as the eighth-best goaltending duel since 1988: 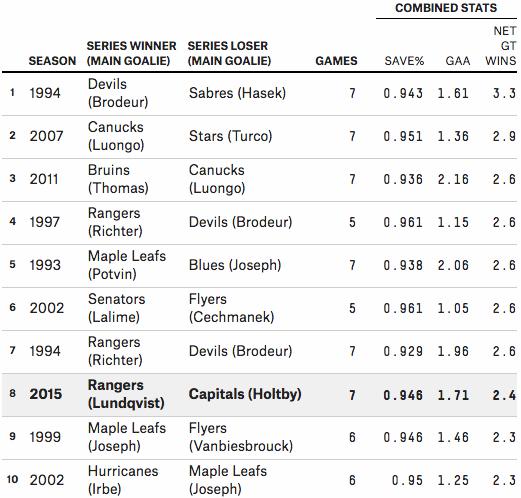 Lundqvist’s next test will be the Tampa Bay Lightning, who led the NHL in goal scoring and shooting percentage this year. Given the Rangers’ comparative lack of superstar talent and their relatively even distribution of goals and assists from their skaters so far in the playoffs, Lundqvist should be the favorite for the Conn Smythe Trophy if the Rangers bring home the Stanley Cup. Just don’t expect it to be easy.