For most of the first period at Madison Square Garden on Monday night, the newly renovated scoreboard above center ice displayed only the time remaining and a 0-0 score — not shots on goal, face-off percentage or the other data that it normally tracks.

I thought this might be a ploy by New York Rangers coach Alain Vigneault. In Games 1 and 2 of the series — both comeback wins by the Los Angeles Kings — the Kings’ peripheral stats were more impressive than the Rangers’ (the Kings led the Rangers 87-65 in shots on goal, for example). Indeed, Los Angeles has a well-deserved reputation as a stat-savvy team that focuses on metrics related to puck possession and scoring opportunities, which can better predict game results than goals scored and allowed.

No #fancystats for you, LA Kings! No moral victory on the strength of Zone Start Adjusted Corsi! You’ll have to win this hockey game the old-fashioned way: by scoring more goals than the other team!

The stats clicked back on to the MSG scoreboard late in the first period. Soon after, the Kings scored, and they went on to beat the Rangers 3-0.

But it was the Rangers who had more scoring opportunities. They had 32 shots on goal, compared with 15 for LA. Counting missed shots and blocked shots, their edge was 59-33.

It can be tempting, if you have a passing familiarity with advanced hockey metrics, to take solace when outcomes like these occur or to curse your favorite team’s bad luck. How often does a team lose despite outshooting its opponent by a 2-1 margin, for instance?

Actually, teams lose often. In playoff games since 1988, teams that took about two-thirds of the shots in a game (somewhere between 65 and 70 percent) won only 62 percent of the time. The chart below generalizes this data based on logistic regression and estimates how often teams win a game based on the number of shots they take. 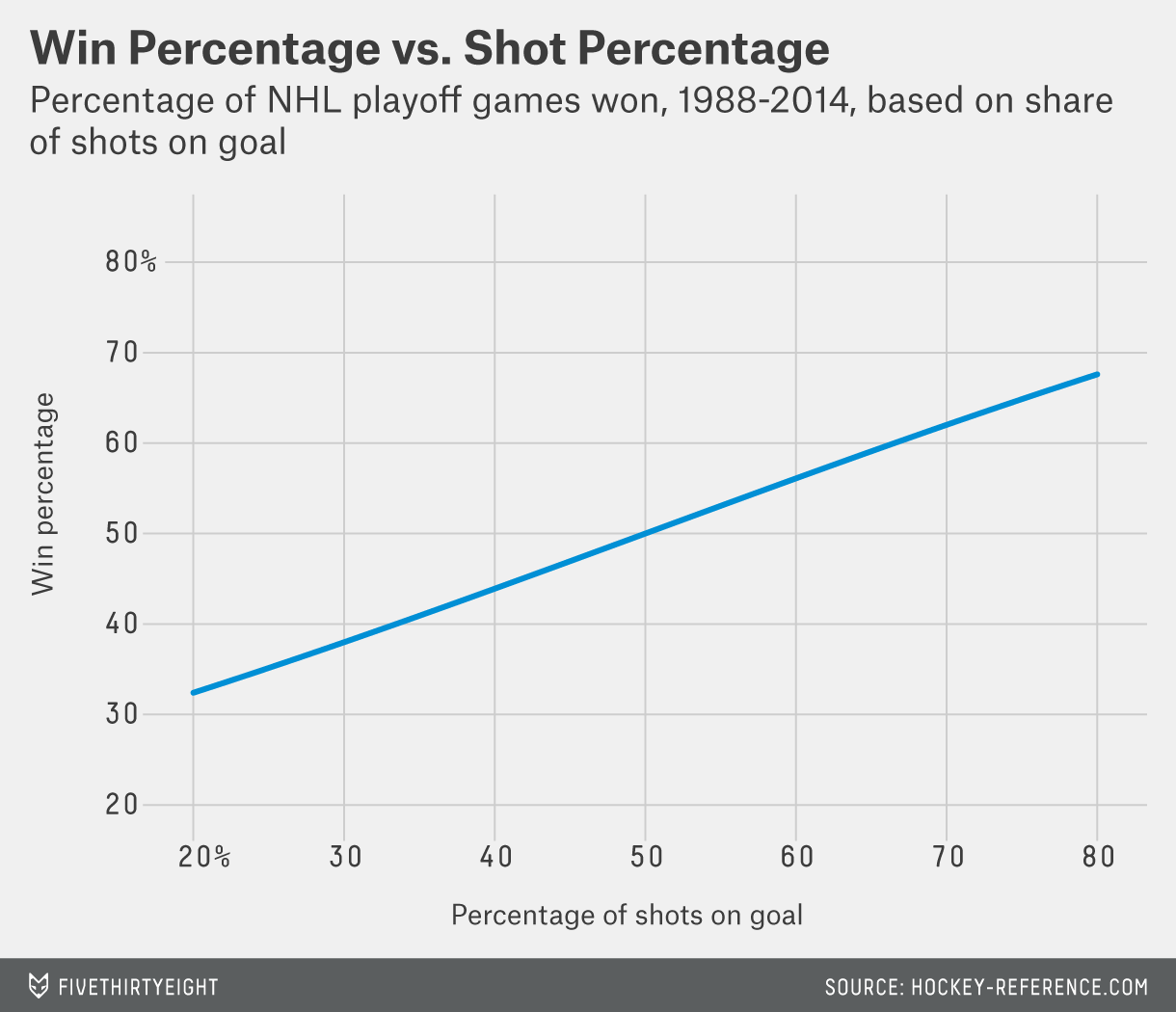 Much of this is simply a reflection of the fact that goals scored and allowed are a noisy statistic. A lucky deflection or two for the Kings, a great save or two by Jonathan Quick, and all those extra shots often go for naught.

But another reason is that play changes once a team finds itself trailing. The shot count was even at 4-4 when the Kings scored with one second left in the first period. The Rangers piled on shots only once they trailed.

The chart below shows how often a team shoots based on the game score. The data is based on playoff games since 2012. It includes blocked shots and missed shots, as well as shots on goal (these are called Corsi events in #fancystats terms) in 5-on-5 play.

Are those extra shots translating into goals? Actually, yes. In cases when it trails by two goals or more, a team scores about 2.4 goals per 60 minutes of ice time at even strength, compared with 1.8 goals for the leading team.

So, at least in the playoffs, there’s been some tendency for the trailing team to recover (despite that it should be the slightly weaker team on average for having fallen behind). It’s like a mild version of the CPU Assistance that allowed the computer to make spectacular comebacks in games such as NBA Jam just when you thought you had everything wrapped up.

It isn’t clear whether this represents rational behavior on the part of the leading team. It would be one thing if it were stalling just to get the game over with, reducing shots and scoring for both teams. But it’s actually allowing its opponents more shots and more goals — at the same time it’s taking fewer of its own.

One possible explanation is the avoidance of penalties (to the extent they can be averted through more passive play). In playoff games since 2012, teams are scoring 6.3 goals per 60 minutes on the power play — nearly three times their rate at even strength. Shorthanded teams score 0.8 shorthanded goals per 60 minutes. Those long-term averages didn’t help the Rangers on Monday night, who went scoreless in six power play opportunities.