No one could blame you if you forgot about it over the holidays, but we’re currently on Day 14 of the partial government shutdown. Polls have been scarce, but shortly after the shutdown began, we got a first taste of how the public is reacting to it. Respondents to three early polls agreed that President Trump was more to blame for the lapse in appropriations than congressional Democrats (or Republicans) were:

The surveys all pointed toward the same conclusion: In the minds of most Americans, Trump was largely to blame. But public opinion may be changing. Those three polls were all conducted before Christmas, when the shutdown was just a few days old. On Wednesday, HuffPost/YouGov released a poll, conducted Dec. 28-30, during the shutdown’s second week, that showed more people disapproving of Congress’s role in the shutdown than of Trump’s. In the poll, 49 percent of Americans disapproved of Trump’s handling of the shutdown while 38 percent approved. Meanwhile, 51 percent disapproved of congressional Democrats’ handling of the shutdown and 33 percent approved. Congressional Republicans got the worst score: 58 percent disapproved of the way they’ve handled the shutdown, and just 25 percent approved. That might indicate that blame is shifting from who caused the shutdown in the first place (pretty clearly Trump, who refused to sign a bill he’d previously signaled he’d support) to who is now preventing it from being resolved (less clear). Indeed, those numbers represented a slight improvement for Trump, and a more substantial deterioration for members of Congress, compared with HuffPost’s first poll of the shutdown, conducted Dec. 22-23.

But these numbers are still bad news politically for both Trump and Democrats, right? Not so fast. While Trump’s approval rating has taken a dip in the last two weeks — quite possibly related to the shutdown — it’s unlikely that any ill will over it will last until the next national election. Our analysis of polls after the 1995-1996 and 2013 shutdowns found that other news events quickly overtook them. Indeed, by just one month after the 1995-1996 and 2013 shutdowns, any changes in the polls that had occurred during the shutdowns had vanished. After the January 2018 shutdown, Trump’s approval rating recovered in two weeks, and generic-ballot polling barely budged at all. In the small sample size we have, shutdowns just don’t seem to have a long-term effect on public opinion. 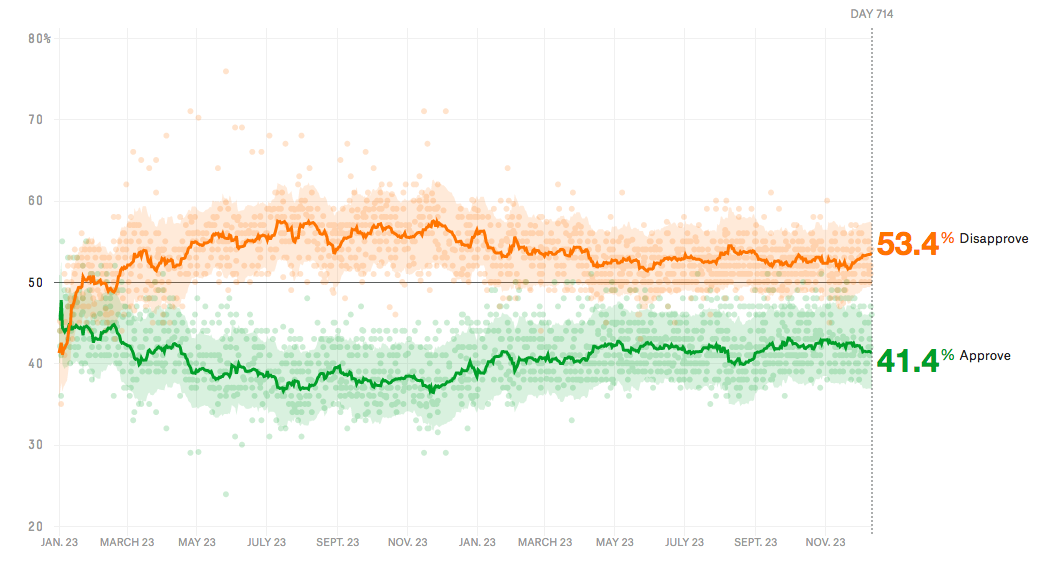