“24” was once a show that captured the American mood. It had its premiere in 2001, telling the story of protagonist Jack Bauer and the rest of the fictional Counter Terrorist Unit taking control and squelching terrorist plots — a narrative that struck a chord in the wake of 9/11. As time went on, its following grew. That is, until 2007, when its ratings began to decline. Viewership shrank every year after, and the series’ return earlier this year as “24: Live Another Day” has had the smallest viewership in the show’s history.

The slipping appeal of “24” appears symptomatic of Americans’ concerns about terrorism generally; the U.S. counterterrorism mission has less urgency now than it once did. You can see this in public opinion surveys, but you can also see it in the political conversation. The American Presidency Project has documented every address and statement made by each presidential administration, which includes the president, vice president, Cabinet members and the press secretary. Its records show that mentions of the word “terror,” “terrorism,” “terrorists,” etc. ballooned after 9/11 and spiked in the run-up to the 2004 and 2008 presidential elections (October 2004 tops the chart at 160 mentions). But mentions bottomed out when President Obama took office and have remained low since. 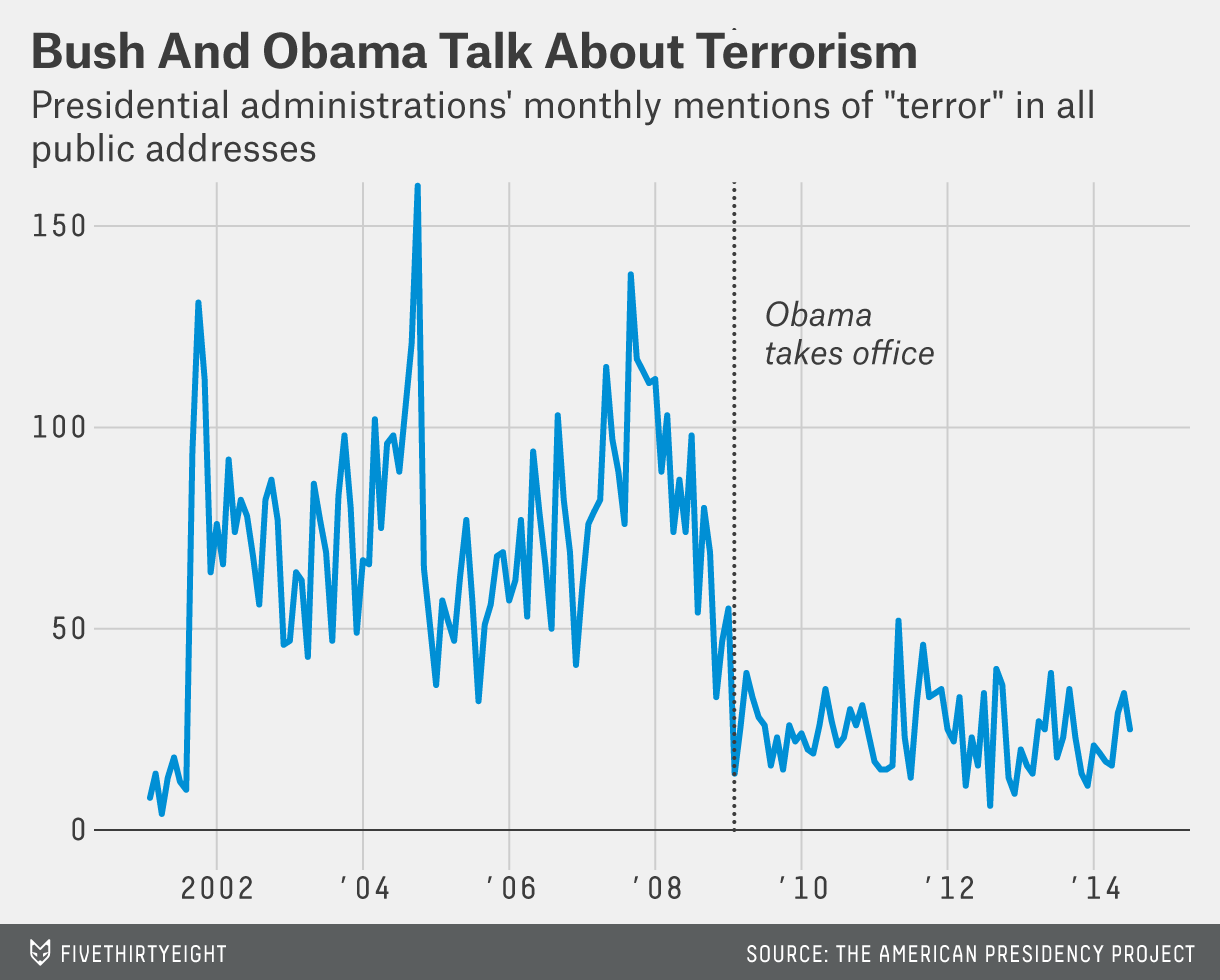 There are also political calculations at work. Both former President George W. Bush and Obama had reason to downplay the threat of terrorism as 9/11 became increasingly distant.

In his first term, Bush’s presidency was defined by counterterrorism efforts. His favorability rating hit its peak at 89 percent between Sept. 20 and Oct. 12, 2001. The 2001-2004 period was marked by constant news conferences about terrorism threats and changes in the terror alert level. But as public opinion soured on the Iraq War (even after Saddam Hussein’s capture) and Osama Bin Laden remained at large, Bush started talking about other things.

A similar pattern is evident in Congress. Mentions of “terror,” “terrorism,” “terrorists,” etc. on the House and Senate floors are currently at a low point, according to the Sunlight Foundation’s Capital Words API. 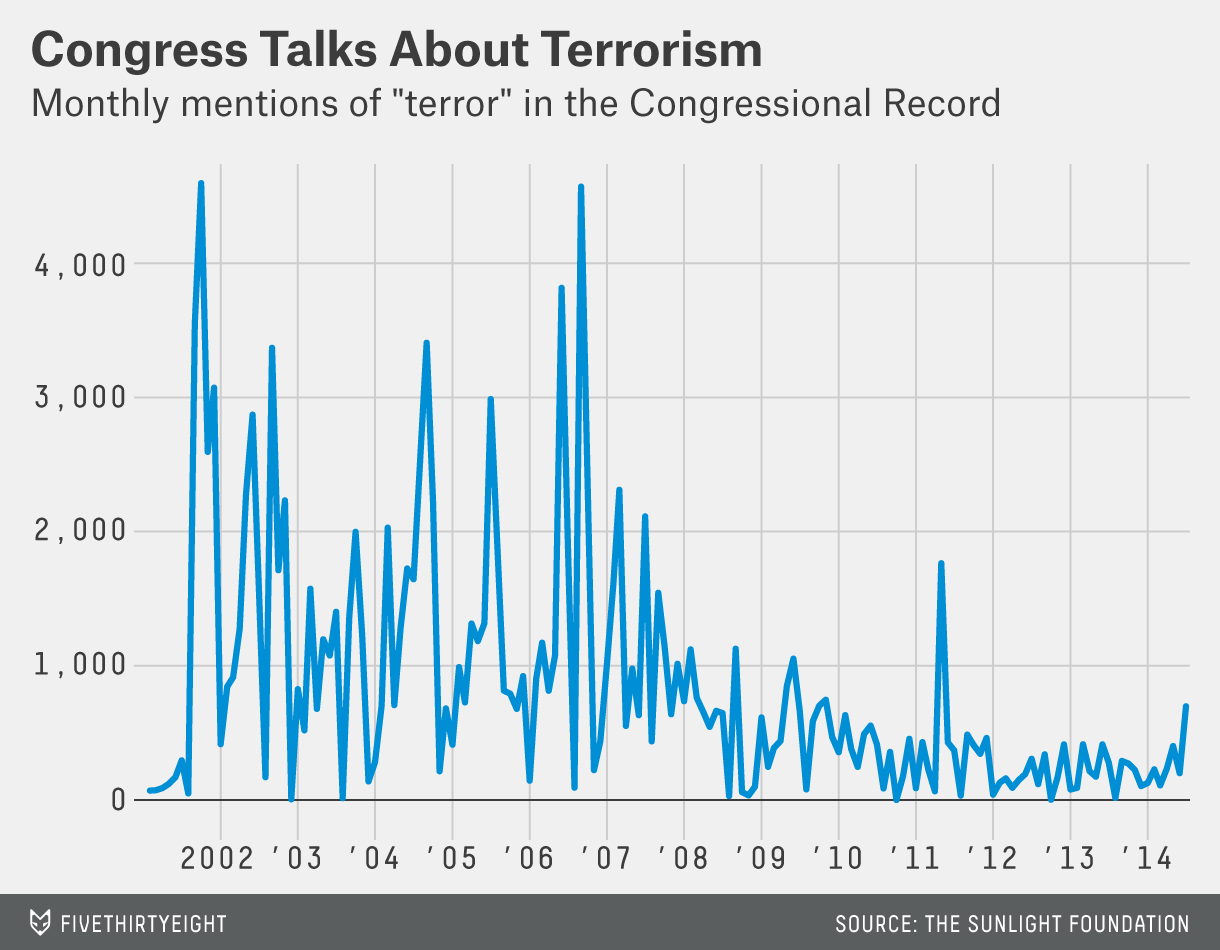 Terrorism’s receding role in political discourse has echoed the public’s shifting focus. In the years following 9/11, counterterrorism efforts were a primary concern for Americans, but last year the Pew Research Center found that — for the first since the question was asked, in 2004 — Americans who valued protection of civil liberties over anti-terrorism efforts outnumbered those who did not. This isn’t exactly surprising, given the way the conversation has changed over the years, and especially in the wake of Edward Snowden’s leaks detailing domestic surveillance by the National Security Agency.

Steven Weber, a professor of political science at the University of California, Berkeley, who has worked with the U.S. State Department and other government agencies on issues such as risk analysis and national security, said Bush had set up the fight against Hussein as a central front in the fight against terrorism. If Bush had continued to talk about terrorism with a persistent sense of urgency throughout the war in Iraq, Weber said, “his legitimacy would have been gone.”

Then Obama “wanted to define his presidency with something other than counterterrorism,” Weber said. “He didn’t want to call attention to that. He wanted to pivot to other things.”

This pivot was encapsulated by the Obama administration’s declaration soon after taking office that it would no longer use the moniker “Global War on Terror” to describe counterterrorism efforts, instead favoring “Overseas Contingency Operation.”

But, according to Weber, Obama’s reduced discussion of terrorism may have consequences for public support of the administration’s counterterrorism efforts. He offers the example of drone strikes. “The debate [over drone strikes] is happening without a full public awareness of what the White House would call a big threat out there that we need to deal with,” he said. “Americans are not quite attuned with, or not quite sensitized to the reality of the threat. The conversation around drone strike ethics would be different.”

But even if the Obama administration were to start talking about terrorism again, the public may not have much of a reaction. “Terrorism has become remote — at least in terms of vividness and relevance to the average citizen,” said Bryan Jones, the director of the Policy Agendas Project at the University of Texas at Austin. “We seem to adjust to a baseline pretty quickly, assuming that what happened yesterday will continue today and tomorrow. We don’t know, but I suspect that talking a lot about [terrorism] in an unreceptive environment would not really help — even if the press were to cover it.”

Whether or not Americans are properly attuned to the threat of terrorism, there’s still a threat. Law requires that the Secretary of State present a report on terrorism to Congress every year. According to the most recent report, published in April: “The terrorist threat continued to evolve rapidly in 2013, with an increasing number of groups around the world — including both AQ [Al-Qaeda] affiliates and other terrorist organizations — posing a threat to the United States, our allies, and our interests.”

Backing up this claim, the Rand Corporation published a report in June on the evolution of Salafi jihadism, one of the most prominent terrorist ideologies,1 since 1988, which corroborates the State Department’s findings. They found that both the number of terrorist groups and the number of terrorists have been steadily rising almost every year, particularly since 2010.

“The threat of terrorism in the United States is constantly evolving, and we’re falling behind in terms of meeting that threat,” Carie Lemack, the homeland security director of the Bipartisan Policy Center, said. “The Obama administration needs to do a better job of explaining to the American public what the threat is, and why we need certain programs to do all we can to thwart that threat.”

Still, most of the action seems to be on the strengthening the civil liberties side of the security-versus-privacy seesaw. And “24: Live Another Day” has yet to be renewed.