In comparison to the dog-and-pony show that has dominated the political news cycle as of late, the question of whom Mitt Romney might pick as his vice presidential nominee is at least one of some substantive importance. Since 1900, about 25 percent of the men and women nominated for vice president by the major-party candidates have later become presidential nominees themselves, and 15 percent have actually become president, whether by winning the office on their own or by succeeding an incumbent who died or resigned in office.

Still, the vice presidential question is not all that friendly to statistical analysis — there is no objective formula to determine whether Senator Rob Portman of Ohio would be a better choice for Mr. Romney than, say, Susana Martinez, the governor of New Mexico. One thing we might be able to address, however, is whether a vice presidential nominee can help the candidate to carry his or her home state.

Since 1920, major-party nominees for president have carried their running mate’s home state 65 percent of the time; the percentage is slightly higher than that, 72 percent in elections since World War II. This, however, is not that revealing a statistic. If Mr. Romney wanted to guarantee that he will win his running mate’s state, he could pick one from Alabama or Utah. That does not necessarily mean that his choice would be optimal, however, in terms of the electoral math or otherwise.

Instead, what we want to know is how much of a push a vice presidential candidate gives to a nominee relative to how he would do otherwise.

The way to do this, then, is to compare the presidential candidate’s performance in the vice presidential nominee’s state to his numbers nationwide. For instance, the Republican vice presidential nominee in 1940, Senator Charles McNary of Oregon, did not allow Wendell Willkie to carry that state, which he lost like most others to Franklin D. Roosevelt. The Willkie-McNary ticket did come within eight percentage points in Oregon, however, slightly better than the 10 percentage points it lost by nationwide. We’ll call this difference the R.V.I., or relative voting index (a takeoff on the partisan voting index produced by the Cook Political Report). In this case, Mr. McNary had an R.V.I. of plus-2 for 1940, since his ticket did two points better in his home state than it did nationally.

But that still does not tell us the whole story. Did Republicans’ outperforming their national numbers by two percentage points in Oregon have something to do with Mr. McNary, or was it a red-leaning state at that time in general?

As compared to the previous election of 1936, this was actually a very good performance for Mr. McNary, since Roosevelt had performed quite a bit better in Oregon that year than he had nationally against Alf Landon. In fact, Oregon had an R.V.I. of negative-10 in that year. Thus, Mr. McNary might be thought to produce a net swing of 12 points, from an R.V.I. of negative-10 in 1936 to plus-2 in 1940.

On the other hand, Republicans (while again losing the state to Roosevelt) had an R.V.I. of plus-3 in Oregon in 1944, despite Mr. McNary’s no longer being on the ticket. Using 1944 as the baseline, in other words, Mr. McNary produced no net gain for the Republican ticket, instead actually costing them one point of R.V.I. If you average together the 1936 and 1944 comparisons, Mr. McNary’s effect on the ticket was still positive in Oregon (a net gain of six points of R.V.I.) but not quite as impressive as it originally seemed.

Over all, the benefit provided by a vice presidential nominee has been quite paltry under this method. On average since 1920, he has produced a net gain of only about two percentage points for the top of the ticket in his home state. 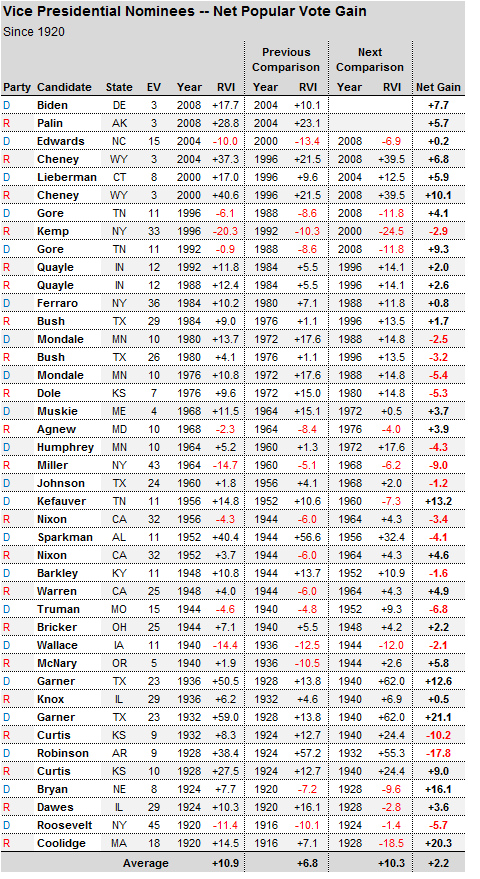 As usual, there are several qualifications and limitations to this analysis. First, the gain produced by the vice presidential candidate has been slightly larger in recent years — about four points on average rather than two in elections since 1984. That could just be a statistical fluke, although it could also represent the fact that vice presidential nominees have taken on a higher profile than they once did.

Second, it may be that some types of vice presidential nominees produce more of an effect than others. Current governors or senators have produced a slightly larger gain on average (about 3 rather than 1.5) than those who were no longer in office, or who were U.S. representatives and therefore represented a Congressional district rather than the whole state.

Third, the effects may be slightly larger in smaller states than in bigger ones, perhaps because their political cultures are more cohesive and it’s rarer for them to see a native son nominated to a presidential ticket. Vice presidential nominees from states with fewer electoral votes have historically provided a slightly larger home-state boost — Joe Biden and Sarah Palin each had discernible effects in Delaware and Alaska in 2008, for instance — although the differences are not statistically significant.

Fourth, the effects seem to be slightly diminished if the vice
presidential candidate wins the office and is renominated for vice president four years later, perhaps because he moves away from his home state to represent the whole country, although the differences are modest.

Fifth, we have made no attempt to account for whether the vice presidential nominee was actually popular in his home state. Mr. Biden and Mrs. Palin were popular in Alaska and Delaware in 2008, for instance, while Nixon was not especially so in California when he was Dwight D. Eisenhower’s vice presidential nominee in 1952. There is certainly no reason to expect vice presidential candidates to produce a home-state bounce if there is evidence (like from approval rating polls) to suggest that the voters in his state don’t like them to begin with.

Sixth, an analysis like this may be complicated by the potential for ticket-balancing. For instance, John Kerry may have picked John Edwards of North Carolina in 2004 because he was worried about how he might perform in the South. If a presidential candidate is deliberately picking a vice presidential nominee from a state where he otherwise expects to be weak, an analysis like this might incorrectly attribute underachievement to the vice presidential candidate when the problem is with the top of the ticket instead.

Seventh, although electoral coalitions have been fairly stable of late, that has not always been the case; Vermont was once one of the most Republican states in the country, and Alabama one of the most Democratic. Thus, there is a lot of noise (or at least conflicting signals) in the data, as these tectonic shifts can sometimes be more powerful than any effect a vice presidential nominee might have.

A different method of analysis might be able to account for some of these issues, although other problems are probably intractable given the relative paucity of data (just one presidential election every four years) and the inherent challenge in pinning down the root causes behind anyone’s vote.

With that said, it seems likely that the vice presidential nominee’s effect on his or her home state is normally quite modest — perhaps two or three percentage points on average, if a little more in some cases and a little less in others.

To be sure, two or three percentage points in the right swing state is not trivial, but it is probably not enough to outweigh the other strengths and weaknesses that a vice presidential candidate could potentially impart onto the ticket.

Indeed, presidential campaigns in recent years have largely abided by this principle, with recent vice presidential nominees hailing from states like Alaska, Connecticut, Delaware, New York and Wyoming that did not figure to be competitive.