Seattle shouldn’t feel too bad, though. Gates has been doing this kind of thing for 12 NFL seasons now, practically since he made the transition from being the second-leading scorer on Kent State’s 2002 Elite Eight basketball team1 to being an All-Pro NFL tight end. Yet, for all of his accomplishments — by Pro-Football-Reference’s Approximate Value system, he’s the second-best tight end ever — Gates’s career remains under-appreciated. That’s what happens when you play in the long shadow of Tony Gonzalez.

Gonzalez, a former tight end for the Kansas City Chiefs and Atlanta Falcons, was a contemporary, a fellow converted basketballer and usually a division rival. Unfortunately for Gates, Gonzalez is also generally considered the greatest tight end the game has ever seen. That has often rendered Gates the position’s second banana within the AFC West alone, much less the whole league or all pro football history. But Gonzalez retired at the end of last season, and Gates (albeit a diminished version of the player he once was) showed Sunday he can still produce feats worthy of our full attention.

It’s a quirk of timing that Gates followed Gonzalez’s script almost line for line. In college, Gates had real NBA aspirations but lacked a true position; at 6 feet 4 inches, he was too small to bang inside against pro-sized power forwards, but he also didn’t have the quickness to chase small forwards around the perimeter.2 Gates’s agent, realizing his client’s lack of a future at basketball’s next level, scheduled him for a workout in front of NFL scouts and coaches, one of whom was Chargers tight ends coach Tim Brewster. San Diego signed him as an undrafted free agent.

Ever since Kellen Winslow redefined the position while playing in Don Coryell’s Chargers system of the 1980s, coaches have been consumed with finding tight ends who check off enough boxes to create mismatches with opposing defenses. Now, when NFL scouts evaluate tight ends, they look for a combination of size, strength, speed and soft hands. In fact, because of the role’s versatility, a tight end can be an offense’s ideal all-around chess piece.

Gates possesses an absurd mix of height, quickness, speed and eye-hand coordination. Even his instincts for the game are superior, despite not having the formative experience of playing in college. He runs routes, for instance, with skill and precision, smoothly changing direction and picking out holes in zone coverages, and shows a preternatural ability to adjust to the ball in midair (witness the transcendent one-handed catch he made on his third touchdown against Seattle).

The incorporation of such talents in one package made Gates nearly impossible to cover in his prime,3 and puts him very much in the conversation for the most productive pass-catching tight end of his era — Gonzalez included.4 Among NFL tight ends over the past 10 full seasons,5 only Gonzalez produced more True Receiving Yards (TRY), and none came close to matching Gates’s Approximate Value. 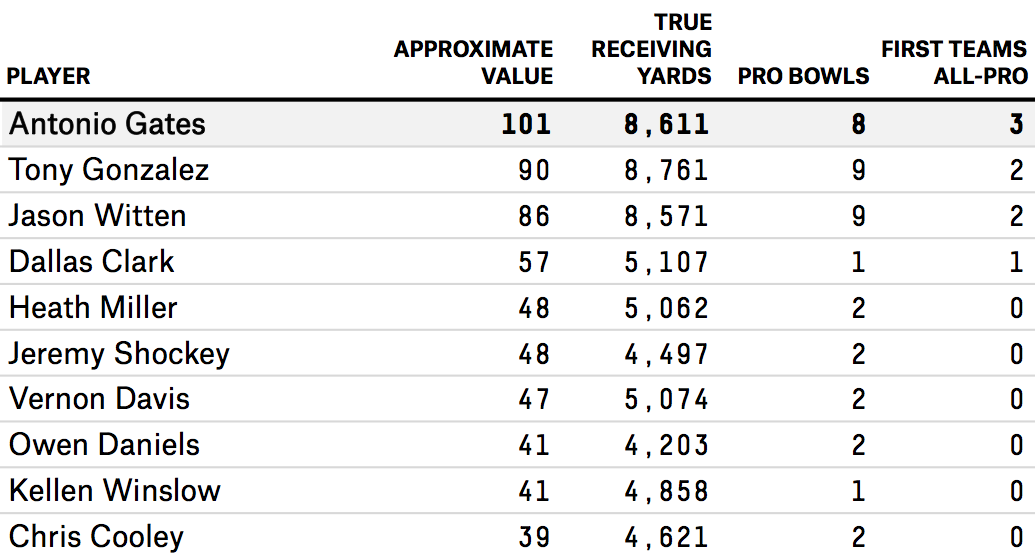 Gonzalez hit the scene first, though, and has had the advantage of longevity. Gates started his NFL career slightly later6 and his production began to slide due to injuries by age 30, while Gonzalez’s numbers were amazingly consistent throughout his 30s (including a remarkable second act with the Atlanta Falcons in which he was named to four consecutive Pro Bowls in his final four NFL seasons).

That’s why, if we zoom out to consider the entirety of NFL history, Gonzalez’s body of work is plainly superior to that of Gates — and every other tight end who ever played the game. 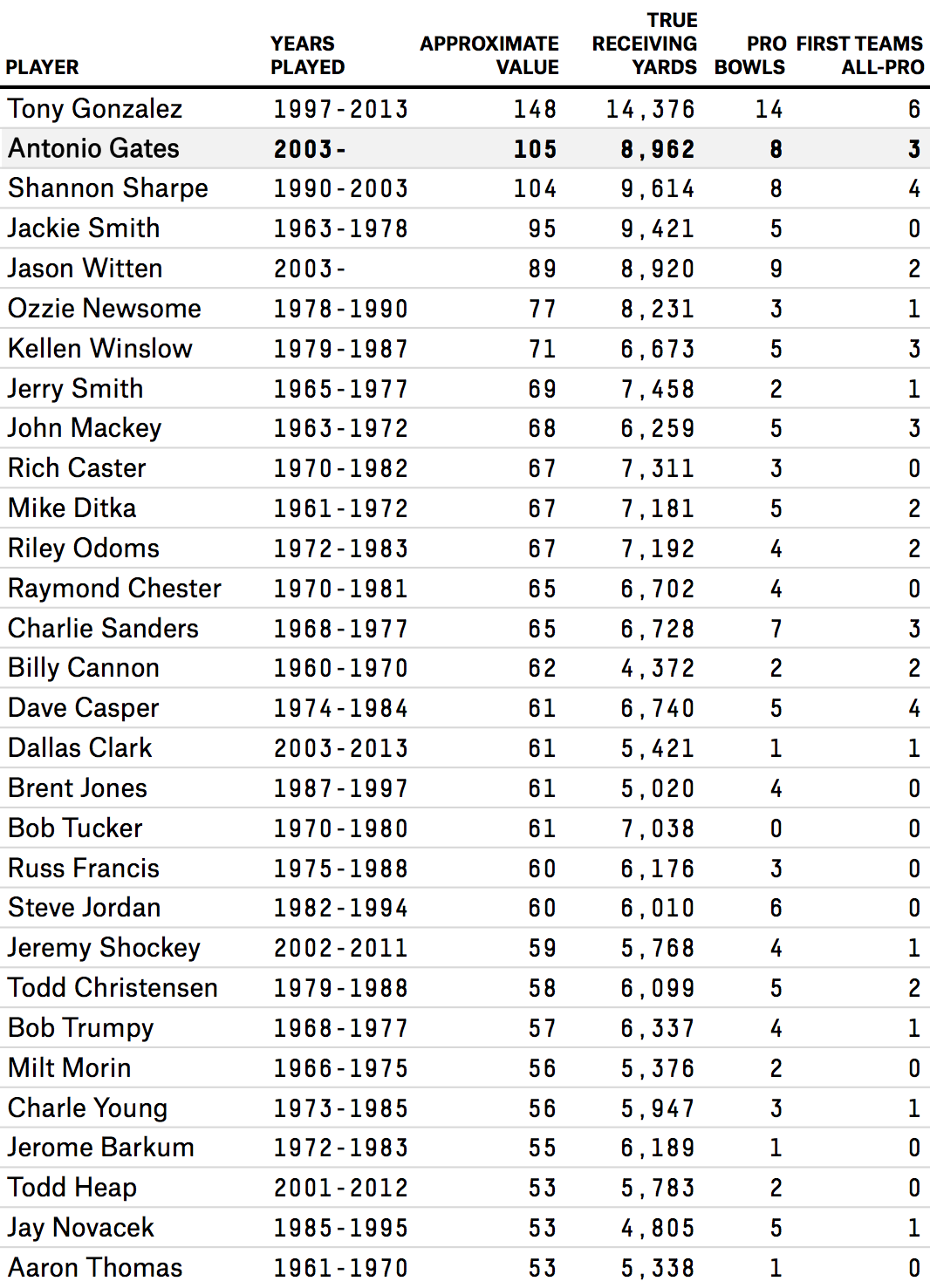 As football has evolved to the point where first-class tight ends argue (for salary purposes) that the league should simply consider them wide receivers, there’s a case to be made that Gates and Gonzalez should be side by side on the position’s Mount Rushmore.

While the decades leading up to the 2000s saw occasional statistical aberrations like Winslow, Ozzie Newsome of the Cleveland Browns and Shannon Sharpe of the Denver Broncos, the best tight ends of the era were still more like Jay Novacek of the Dallas Cowboys or Brent Jones of the San Francisco 49ers — sure-handed receivers who mostly ran underneath routes and could block when needed. Between 1983 (Winslow’s final 1,000-TRY season) and 2000 (Gonzalez’s first), only twice did a tight end crack 1,000 True Receiving Yards in a season: Todd Christensen of the Los Angeles Raiders in 1986, and Sharpe in 1996. 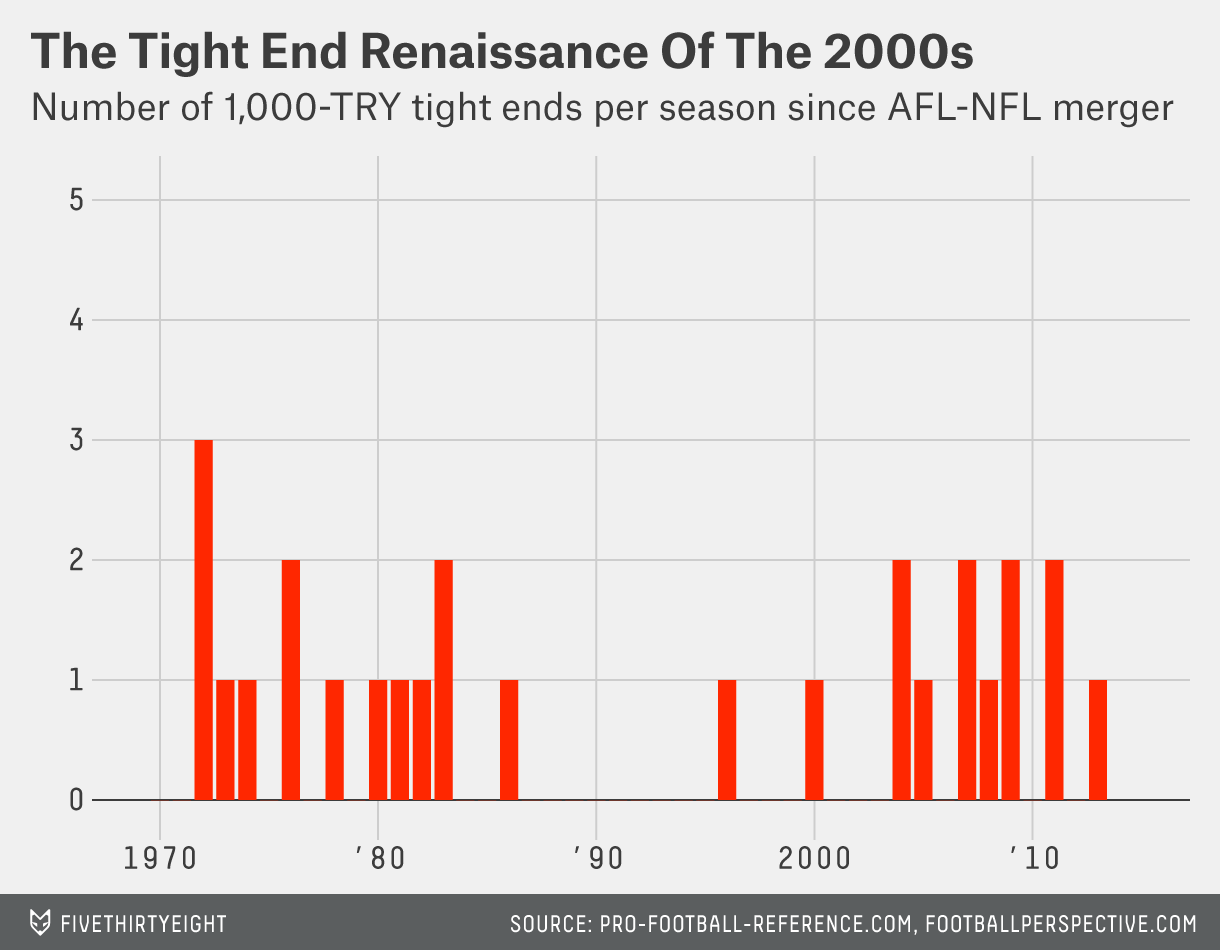 But the arrivals of Gonzalez and Gates signaled a change in the position. They ran routes like wide receivers, adding an invaluable dimension to their offenses, and in turn their style of play directly helped spawn today’s generation of supercharged receiving tight ends. There have been more 1,000-TRY seasons by tight ends since 2000, when Gonzalez opened the floodgates, than in the previous 27 years, and more than half of those were by either Gates or Gonzalez.

Because they emerged at nearly the same time, in the same division, Gates will probably never truly escape the comparison to Gonzalez. That’s unfortunate; it’s one that Gates can’t possibly win. But if you compare him to every other tight end in history, it’s hard to find another career that stacks up to his, at least in terms of pass-catching prowess. At age 34, Gates is only intermittently capable of the types of outbursts we saw from him on Sunday, but his legacy as a trendsetter — and one of the very best tight ends ever — should nonetheless be secure.