I don’t watch “The Daily Show With Jon Stewart.” In fact, I don’t watch any late-night television. Stewart’s announcement that he’ll leave “The Daily Show” after 16 years is not, for me personally, a big deal. So I felt a little left out as the media churned out ode after ode to Stewart.

But — I’m sorry to be the skunk at the garden party — “The Daily Show” always had limited appeal; it just happens that the appeal included the New York media elite.

Stewart largely appeals to wealthy and well-educated liberals — a small slice of the overall news audience.

Stewart, simply put, has been speaking to only a small group of people. You can see this in his television ratings. While it may shock some, the vast majority of Americans didn’t watch Stewart. Indeed, the vast majority of late-night viewers didn’t watch him. Last month, “The Daily Show” pulled in about 1.15 to 1.3 million viewers daily. Even if you include the roughly 250,000 viewers that, on average, watch “The Daily Show” on its website, Stewart’s audience is, at best, an average of about 1.5 million. According to Nielsen NNTV data, “Jimmy Kimmel Live” and Jimmy Fallon’s “The Tonight Show” were seen by an average of 2.7 and 3.7 million people, respectively, in the final quarter of 2014.

Of course, Stewart has the tougher game of playing on cable. That, however, cannot fully explain why Stewart’s ratings have been down over the past few years. 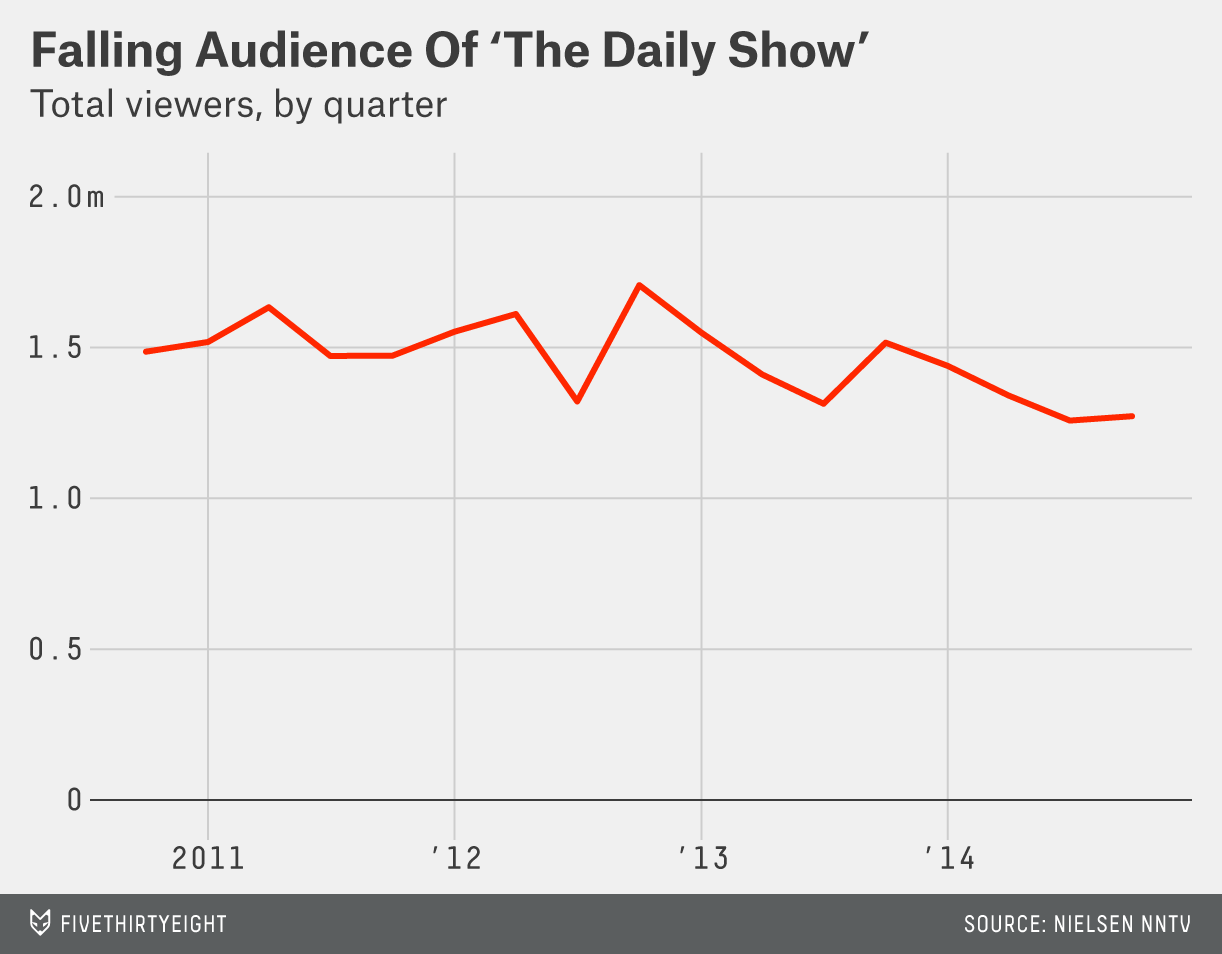 Could this just be because television ratings are down generally? Maybe, but during the past year, the “Jimmy Kimmel Live” audience is up 4 percent.

But what about with younger viewers for whom Stewart is supposedly the voice of a generation? He’s been bleeding younger viewers at a 20 percent rate since the fourth quarter of 2010, when Stewart clocked in with 860,000 18- to 49-year-olds. 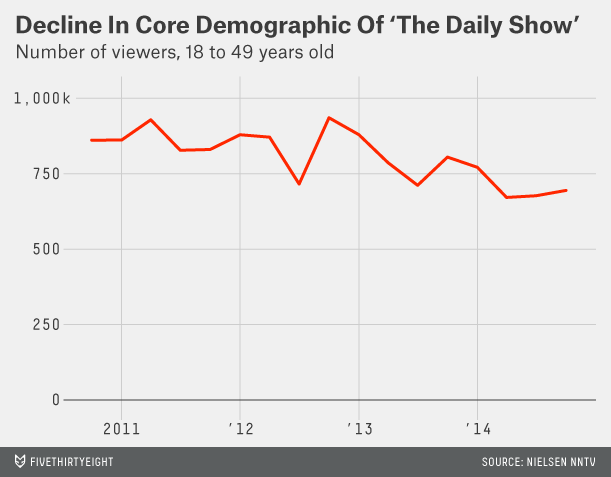 Part of the drop in the number of younger people watching Stewart over the past year is likely because of Fallon’s takeover of “The Tonight Show ” in 2014, though Kimmel was stable year-to-year.

That’s not to say that the idea of Stewart’s youth appeal is way off the mark. The majority (55 percent) of his audience in the fourth quarter of 2014 was in the 18- to 49-year-old demographic, while just about a third of Fallon’s and Kimmel’s were. Stewart, though, isn’t as cool as Conan O’Brien. (Note: I have a slight bias toward O’Brien as he spoke at my college graduation.) O’Brien, who has his own problems with overall viewership, has increasingly become reliant on the 18- to 49-year-old demographic; 59 percent of his viewers in the fourth quarter of 2014 came from this prized demographic.

Now, there are things that go into influence beyond ratings. “The Daily Show” has a powerful Facebook and Twitter presence. Then again, an online weather forum that I used to moderate somehow has more than 100,000 followers on Facebook, too.

Perhaps more importantly, Stewart can also claim that the media watches him. That’s undeniably true, based on the press’s reaction over the past 48 hours. That’s the type of influence that’s difficult to buy. But the media loving Stewart has also led to an overhyping of Stewart’s reach.