Football is a struggle for leverage — a battle for favorable positioning between offensive and defensive players relative to the ball. Each play begins at the line of scrimmage with the possibility of a pass or run. While the NFL has gradually become a passing league due to rule changes and schematic innovations, the primacy of passing is largely because teams have become so good at defending against the ground game.

Offensive coordinators have developed different blocking schemes through the years in an attempt to wring more efficiency out of the run game, while defensive coordinators fiddle with different ways of aligning their fronts and second level players to defend it. If the goal is increasing offensive efficiency on the ground, however, the story has mostly been one of failure for the offense. The difference in passing yards per attempt vs. rushing yards per attempt across the league is at its highest point in the past four years and the third-highest since 2001. 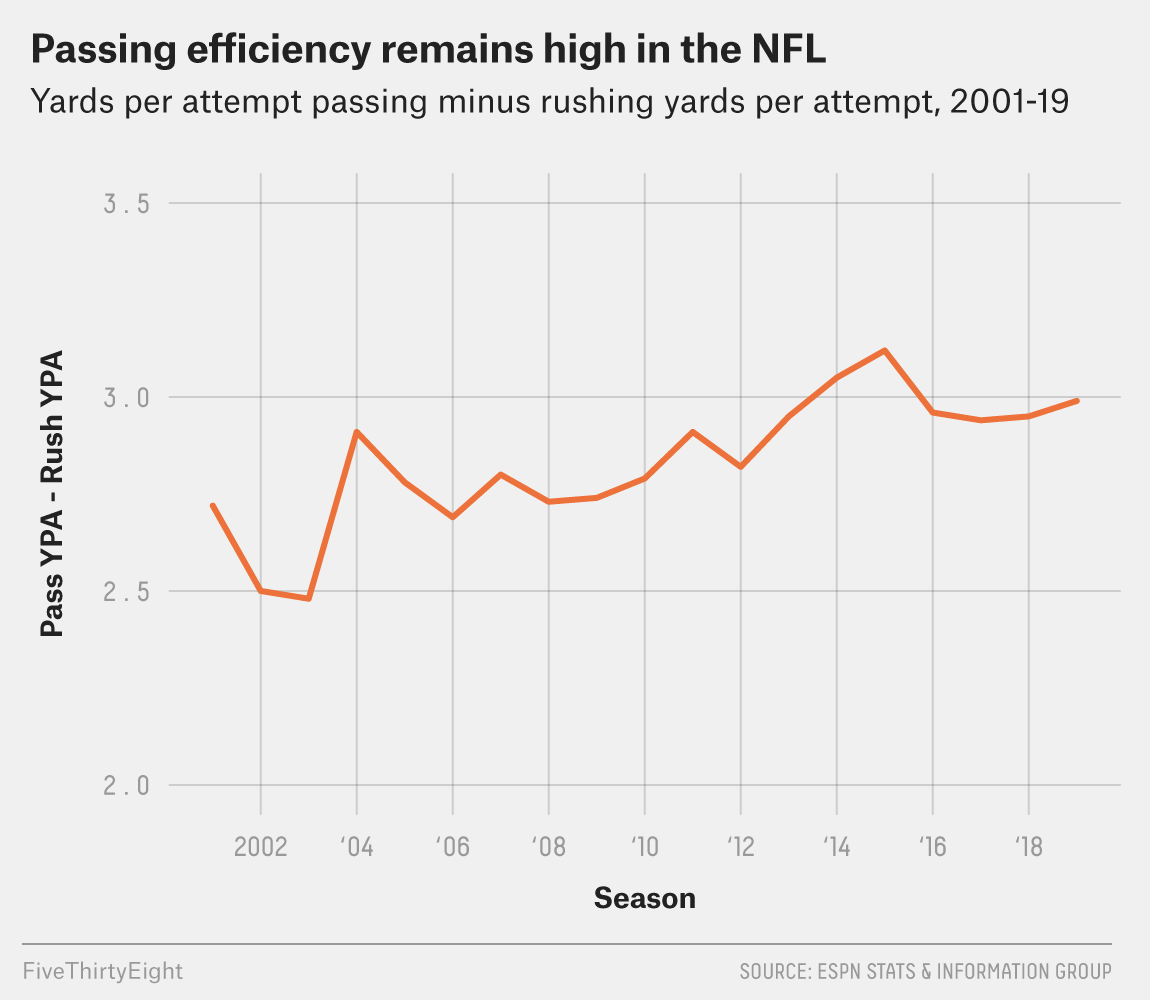 There are still teams built around a successful rushing attack: The 12-win Ravens and 11-win 49ers are running more than they pass. But Baltimore’s ground game revolves around quarterback Lamar Jackson, who broke the NFL single-season rushing record for a QB on Thursday night and is the leading candidate for league MVP. San Francisco, meanwhile, is second in the league in rushing plays with a fullback on the field, but the Niners are averaging nearly twice as many yards through the air with a fullback on the field as they are on the ground, a trend that is common across the league.

All that said, hope isn’t completely lost for aficionados of efficient running. The numbers suggest that there is a way teams can gain an advantage over the defense in the run game, and it doesn’t require an exotic scheme or rare talent. It turns out that moving an extra blocker from one part of the field to the point of attack — the area a team hopes to run into — can help a rushing play be more effective. Called a pull, the tactic is common at every level of football.

The diagram below shows a pull in action. It highlights a guard on the left side of the formation who leaves his spot on the line and travels down the line of scrimmage, into the gap the running back (in green) is heading toward.

Pulls have been quite effective across the NFL in recent years. Since 2016, the first year for which we have Next Gen Stats tracking data, rushing plays in which a lineman1 pulled and then blocked three gaps or more away from where he initially lined up have averaged 0.01 EPA per play. While that might sound meager, compared to plays where no blocker pulled (-0.05 EPA), it’s a striking level of efficiency. And in the low red zone, conventionally defined as from the 10-yard line to the opponent’s goal, pulling generates 0.03 more EPA per play than plays with no puller.

What’s curious is that despite the greater success, NFL teams run nonpull plays five and a half times more often than plays with a pull in the low red zone.2 I reached out to Sam Schwartzstein, a former center for the Stanford Cardinal and the current director of football operations for the XFL to ask why that might be.

“I don’t know why NFL teams don’t pull more [near the goal line]. We had two calls for goal-line ‘power’ concepts at Stanford. We wanted to create angles and momentum with a puller at the goal line,” Schwartzstein said.

Schwartzstein showed me a short-yardage and goal-line package for a Stanford game against Oklahoma State with multiple plays calling for a pulling guard. When I mentioned that athletic freaks like defensive tackle Aaron Donald might affect a coach’s decision making on whether to pull, Schwartzstein disagreed. He said pulling can work even better against a matchup like Donald.

“Blocking back on the world-beater 3-techs like Donald is a problem, but I don’t buy the argument because you can leave a lot of backside unblocked in goal line and get a true double team. It might actually be easier to pull on goal line.”

If more effective running is the goal, NFL teams would likely benefit from tweaking their scheme to include more pulls than by trying to emulate the success of a team like Baltimore, which has actually done better this season on nonpull plays than on pulls. But no other team has Jackson. Even if the league suddenly found the courage to draft him, another Lamar Jackson isn’t likely to come around anytime soon.