The number of polls conducted ahead of a primary or caucus is often a good indication of the amount of attention it is receiving from the public and the news media.

By that measure, Saturday’s Republican caucuses in Nevada might qualify as low impact. In January alone, there were almost 40 polls ahead of the Florida Republican primary, which was held Jan. 31. By contrast, there have been two polls conducted of Nevada voters in recent days.

The comparative lack of interest in the race is the result of several factors. The date of the caucuses was moved back and forth several times and then wound up in an awkward spot between Florida and Super Bowl Sunday. The contest awards its delegates on a strictly proportional basis (the only requirement is that candidates must receive at least 3.57 percent of the vote to qualify for delegates). And it does not have very many of them — 28 — so even a 30-point win by a candidate like Mitt Romney would result in a relatively meager net gain of 8 to 10 delegates over his next-closest rival.

And the winner of the race is something of a foregone conclusion. Mr. Romney won the caucuses easily in 2008 and is expected to do the same this time around.

Mr. Romney led in both of the recent polls of Nevada, and the FiveThirtyEight forecast projects him to receive 51 percent of the vote there. Let us consider the race from the standpoint of Mr. Romney and the other rival candidates.

Our forecast model was designed for states in which there is robust polling — not just two surveys. So there may be a higher-than-usual chance of Mr. Romney finishing outside of his forecast range of 41 to 56 percent.

If the forecast misses, it might be by underestimating Mr. Romney’s vote. In 2008, polls badly underestimated the magnitude of Mr. Romney’s win in Nevada, predicting a narrow win when he in fact won by 37 percentage points.

One reason Mr. Romney has such a big advantage in Nevada is because of the presence of Mormon voters there, who tend to vote Republican and turn out in large numbers for the caucuses. In 2008, 26 percent of voters in the caucuses were Mormon — and a remarkable 95 percent of them voted for Mr. Romney, according to exit polls.

If the Mormon vote is similar Saturday, that means Mr. Romney will essentially have a 25 percent cushion regardless of how he does among other groups — similar to the margin of victory we project.

So one thing to watch is whether Mr. Romney wins among non-Mormon voters. If so, that could bode well for him in states like Colorado and Minnesota, which hold caucuses on Tuesday. If not, it might imply that Mr. Romney’s performance in Nevada was more idiosyncratic.

There might theoretically be some advantages for Mr. Gingrich in Nevada. In 2008, 40 percent of voters there identified as “very conservative”. And one caucus is being held at a private school run by Sheldon Adelson — one of Mr. Gingrich’s biggest backers.

But Mr. Gingrich’s campaign has made something of a halfhearted effort in Nevada — and campaigns like that are often at risk of underachieving their polls.

The results may provide some sense of how much of a base of support Mr. Gingrich has in the absence of either strong organization or favorable momentum. If he finishes with under 20 percent of the vote, that could mean that candidates like Ron Paul and Rick Santorum are better poised to pull off upsets in future caucus states.

From the polls alone, it might seem that Mr. Paul has little chance of finishing second in Nevada. The high end of his forecast range runs up 23 percent of the vote, which eclipses Mr. Gingrich’s low end of 20 percent, but not by much.

However, there is some reason to think that the polls have underrated Mr. Paul.

Mr. Paul got 14 percent of the vote in Nevada in 2008 — more than he did in Iowa, New Hampshire, South Carolina or Florida that year.

However, Mr. Paul has outperformed his 2008 numbers in each of the first four states, sometimes by a considerable margin. If the same pattern holds in Nevada, he could easily get 25 percent of the vote or more. A regression analysis based on the comparison between the 2008 and 2012 results in the other states would project him to 32 percent, in fact. 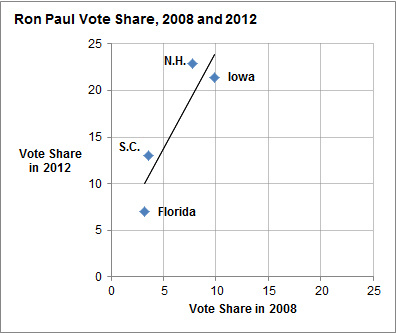 In addition, Nevada has a fair number of libertarian-leaning voters — and the lack of excitement over the race could result in a lower turnout and increase the advantage for candidates who have enthusiastic supporters, like Mr. Paul. Thus, I would not be remotely surprised if Mr. Paul finished second, despite what the polling (and therefore our model) says.

At the same time, if Mr. Paul does only finish with about 15 percent of the vote, it could be a sign that there are limits on his support no matter what the circumstances, and that some of his purported strength in the caucus states is a myth. Mr. Paul probably has more on the line than any other candidate tonight.

Mr. Santorum was the winner of the first and only Republican caucus to date, in Iowa, but he looks likely to finish well back in Nevada. The religious demographics of the state do not play well for him: just 19 percent of voters there identified as evangelical Christians in 2008 and only 18 percent identified as Catholic. There are some social conservatives in Nevada, but most of them are Mormon, and will vote for Mr. Romney.