After one of the most astonishing score lines in the history of the World Cup on Tuesday — Germany 7, Brazil 1 — nothing that happens in Sunday’s World Cup final would be a total surprise. But we do have estimates of the most likely final scores for the game.

Germany is a 63 percent favorite to defeat Argentina, according to the FiveThirtyEight forecast. Argentina had a slightly higher Soccer Power Index (SPI) rating when the tournament began, but Germany has seen its rating rise, particularly after its thrashing of Brazil, and it now ranks No. 1 by some margin. Betting lines also have Germany favored.

The SPI match predictor allows us to predict the number of goals scored and allowed for each club. It calls for 1.7 goals by Germany and 1.2 by Argentina.

There are a couple of problems with this — for one thing, a team cannot score seven-tenths of a goal. So the match predictor uses a version of a Poisson distribution, which calculates the probability of the teams finishing with any whole-number score. For example, if Germany scores an average of 1.7 goals, how often does it score exactly two goals or exactly three goals? That’s what a Poisson distribution does.

Another issue is that the match predictor is calibrated on the basis of 90-minute matches when knockout-round games can go to extra time. To account for extra-time results, we ran an additional Poisson regression based on the results of extra-time games in major international tournaments since 2005. (In geek speak, we’re nesting a Poisson distribution within another Poisson distribution.) All of that produces the following heat map: 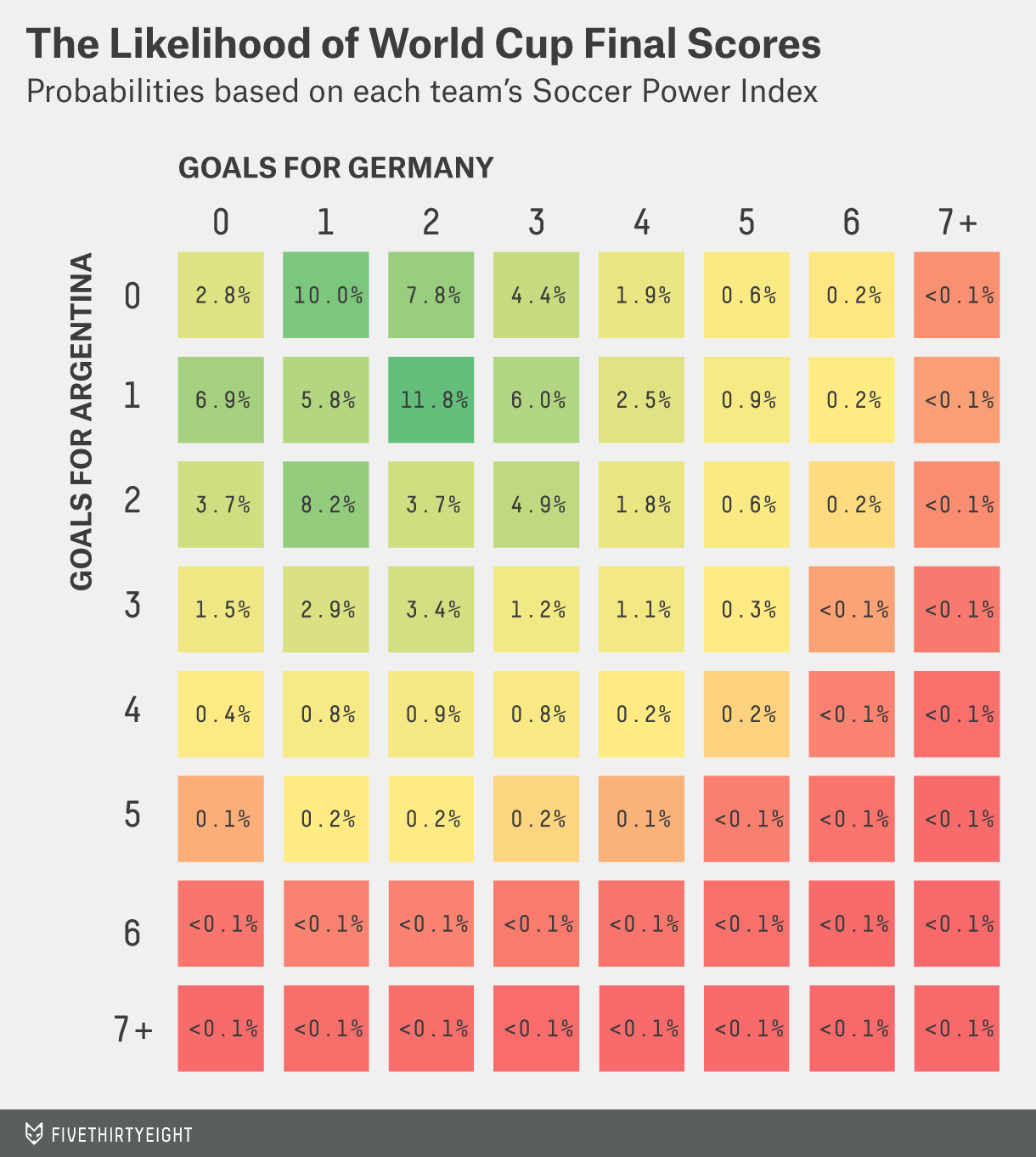 Read left to right for Germany’s score and top to bottom for Argentina’s. Boxes in which the score is still tied after extra time represent cases where the game goes to penalty kicks (there is about a 14 percent chance of this happening). The 10 most probable scores are as follows:

What are the odds of another 7-1 scoreline? The model says there is only about a 0.06 percent probability of such a score favoring Germany (about one chance in 1,600). There’s even less of a chance — more than 10,000-to-1 against — of the same score favoring Argentina.

As strange as this experiment might seem, it isn’t a bad mathematical approximation of a soccer game. And for the most part, Poisson distributions do a good job of modeling real-world soccer scores.

But there are some complications. For instance, we may have some estimate of how the absences of Neymar and Thiago Silva might affect Germany’s chances of scoring against Brazil. But there is some uncertainty around that: Maybe Brazil plays more fluidly when it isn’t waiting around for Neymar to do something, or maybe it breaks down. This is equivalent to not knowing exactly how many GOAL! balls and blanks there are in the ping-pong machines. This uncertainty will tend to slightly increase the number of extreme outcomes (Germany scoring zero goals or a lot of goals) that we observe in the real world.

Another issue is that the texture of play in soccer depends to some extent on the scoreline. Play is usually tighter and more conservative in a drawn game and then opens up once the tie is broken. As a result, standard Poisson distributions slightly underestimate the chance of draws and of some wild scores, such as 5-2. (The variant of the Poisson distribution that we use is meant to address this problem.)

For the most part in sports, these complications are not worth worrying about. There are cases where a Poisson distribution or a normal distribution isn’t perfect — normal distributions seem to slightly underestimate the number of extreme outlier scores in sports — but they usually hold up reasonably well. Nobody gets hurt when you say that Germany has only a 1-in-4,000 chance of winning by six goals when it actually had a 1-in-400 chance.

But real-world distributions are often slightly fat-tailed, meaning that extreme outliers happen more often than the normal distribution predicts. And — outside the sports world — using the wrong model can cause real problems, underestimating the chance of an earthquake or a financial crisis.