Which team had the most impressive run to the Final Four?

The question might seem like the sports equivalent of “Which of your children do you love the most?” Any team that wins four straight games in the NCAA men’s basketball tournament has a lot to be proud of. Papa Brackets thinks all the Final Four teams — Florida, Connecticut, Kentucky and Wisconsin — are very special.

But conventional wisdom appears to hold Kentucky’s path in ever-so-slightly higher regard than the other schools’. The Wildcats defeated an unbeaten No. 1 seed (Wichita State) and both of last year’s finalists (Michigan and Louisville) en route to Arlington.

Still, Connecticut’s run has been slightly more special than Kentucky’s so far. And Wisconsin’s, even more so.

The FiveThirtyEight model has a particular way of answering our question. It evaluates teams not in any absolute sense, but relative to its expectations. And it accounts not only for wins and losses (by definition, any team that makes to the Final Four has won at least four straight games), but also for margin of victory.

To be more specific, the model calculates not only the win probability for each game, but also an implicit point spread. For example, it gives Florida a 69.9 percent chance of beating Connecticut on Saturday. That translates into Florida being 5.5 point favorites. The model has Wisconsin with a 58.2 percent chance of beating Kentucky, which would equate to the Badgers being favored by two points.

How a team fares relative to this point spread affects how the model evaluates it going forward. Why? Tournament results are quite predictive of future tournament results: A team that is terrific in the early rounds often does well in later ones.

Occasionally, a team can end up in worse shape despite winning its game. This happens when the model expects a blowout and the team wins by a smaller margin.

A case in point is Florida in its opening-round game against Albany. The model had the Gators as 24-point favorites, but Florida won by 12 points (in fact, the game was a little closer than the scoreline implies).

What about Florida’s three other wins? It was clear that the Gators were the favorite in each game, but they performed about in line with the model’s expectations — beating its point spread by six points against Pittsburgh and four points against UCLA, and underperforming it by two points in their win Saturday against Dayton. To be clear, the Gators have been great — and the model has them as the plurality favorite to win the tournament. But Florida was a great team going in. It has performed roughly as expected against a relatively easy draw. 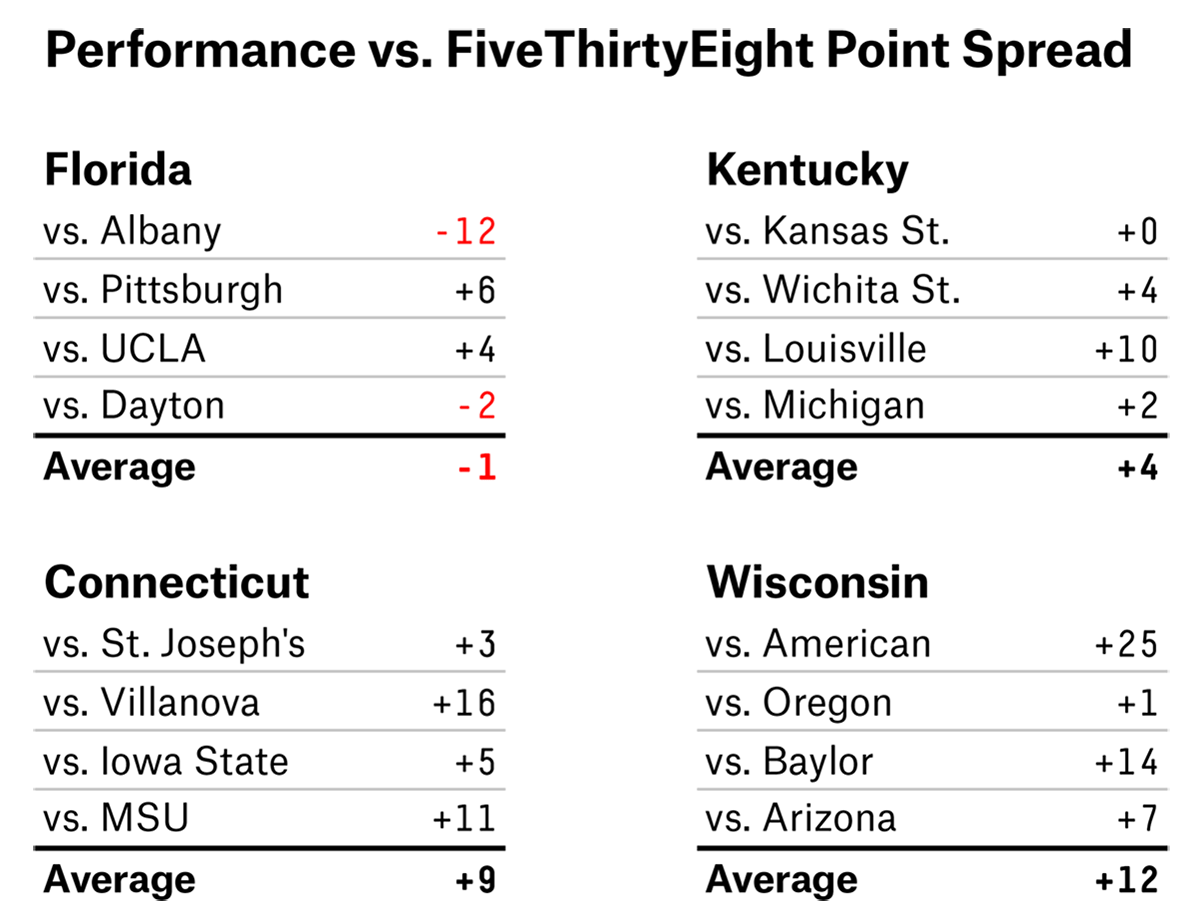 How about Kentucky? If viewed as a No. 8 seed, the Wildcats have been extremely impressive — not least on account of the quality of competition they’ve faced. But Kentucky was no typical No. 8. The Wildcats ranked first in the country in the preseason AP and USA Today Coaches polls, a factor for which the FiveThirtyEight model accounts. They took 10 losses in the regular season, but they faced a tough schedule; all but two of the losses, both to Florida, came by single digits.

By this standard, both Connecticut and Wisconsin have done more to exceed expectations. The Huskies were the narrowest of favorites against Iowa State on Friday, in part because Madison Square Garden is a de facto home court for them. (Geographic distance from a team’s home campus is another factor that the FiveThirtyEight model accounts for; the author of this article went to the games at MSG for “research purposes” and can confirm that there was a lot of Huskies love there.) But Connecticut also won as underdogs against Michigan State and Villanova. The Villanova win, which came by 12 points, was relatively emphatic.

The improvement in the model’s esteem for Wisconsin is partially the result of the Badgers’ upset of No. 1 seed Arizona on Saturday. But it has more to do with the their performance in earlier rounds. Wisconsin thrashed Baylor by 17 points Thursday, and the Badgers beat American University by 40 points in their opening game. On average, Wisconsin has outperformed the FiveThirtyEight point spread by 12 points, as compared with nine points for Connecticut and four for Kentucky.

Evaluating teams by their margins of victory is unpopular; it may seem as heartless as rating your kids by their SAT scores. We’re fans of systems such as the Basketball Power Index (BPI) that account for the scoring margins throughout games and not just at the final buzzer. But margin of victory predicts future performance reasonably well — better than ratings based on wins and losses alone do. By that measure, Wisconsin heads to Texas with the most momentum.

(Nerd alert: The point spread can be derived through the formula NORMSINV(WINPROB)*10.36 in Microsoft Excel, where WINPROB is a team’s probability of winning.)