Former British Prime Minister Tony Blair and U.S. Secretary of Education Arne Duncan were both on hand Monday morning to crown the school districts in Gwinnett County, Georgia, and Orange County, Florida, as the first dual winners of the Broad Prize for Urban Education. They will split the $1 million prize, which comes in the form of scholarships worth up to $20,000 for graduating seniors.

The prize, described variously as the Nobel or the Oscar or the Pulitzer of the education reform movement and sponsored by billionaire Eli Broad and his wife, Edythe, aims to “regain the American public’s confidence in public schools by spotlighting districts making significant gains in student achievement.” Both districts were cited for above-average academic performance for low-income and minority students relative to other districts in their states.

Past winners of the prize, which has been awarded since 2002, include New York City and Boston. Last year, the Houston Independent School District became the prize’s first two-time winner.

Finalists for the prize are determined through a review of several academic measures. A look at the performance of recent Broad winners on a separate test, however, highlights both the strengths of those districts and the continued challenges they and all urban school districts face. Although recent winners of the Broad Prize show positive results compared to many large urban districts, their scores are largely flat — or even worse — over the past several years. Houston’s performance in fourth- and eighth-grade reading, for example, has shown slower growth since 2009 than the national average and trails national numbers for low-income, black and Hispanic students.

Over the past 15 years, the Broads’ urban-education-focused foundation has committed more than $600 million in grants for schools and education groups, making it one of the chief drivers of the so-called education reform movement, which promotes market-based approaches to improving education, such as increased competition among schools and performance-based pay for teachers.

Skeptics question whether the foundation’s choice is influenced more by districts’ alignment with its policy goals than by student performance. “The Broad operation is so inherently ideological,” said Gary Orfield a professor in the graduate school of education at UCLA.

But Nancy Que, director of the prize, says a “purposeful wall” is maintained between the foundation’s “reform” agenda and the prize selection. Each year, a review board looks at academic markers for the 75 largest urban school districts, including performance on state tests, graduation rates, and participation and performance on the SAT, ACT and Advanced Placement exams to determine finalists. The winner is selected after site visits to all of the finalist districts, taking into account their leadership and governance policies.

The committee’s grab bag of performance metrics reflects the reality of the limited availability of truly comparable district-level data. Even state-level data is not comparable beyond state borders because each state has different standards and assessments. “We have more data than we used to have before the accountability revolution, but we still don’t have a lot of data,” Orfield said.

That vacuum has been filled somewhat by a 12-year-old district-level version of the National Assessment of Educational Progress (NAEP), which now includes 21 of the country’s largest urban districts.1 The federal assessment is often referred to as the “gold standard” of school testing because it is independently — and randomly — administered to a sample of students every other year without any stakes attached. The test measures reading and math for fourth- and eighth-graders and is intentionally not aligned to state academic standards, to try to capture what students are actually learning and to prevent “teaching to the test.”

This year’s Broad Prize finalists are not among the 21 districts. But Houston and the two most recent prior winners, Miami-Dade County and Charlotte-Mecklenburg, are. As such, their performance offers a window into the likelihood of continued success for schools in Gwinnett and Orange counties.

NAEP results are released as both a scaled average score and as a percentage of students performing at grade level. The results are available overall and for subgroups, including by race, gender and income status.

Comparing the scaled scores of all the districts in the most recent NAEP assessment — from 20132 — highlights the solid overall performance of all three most recent Broad winners in relation to the other 18 NAEP districts.3 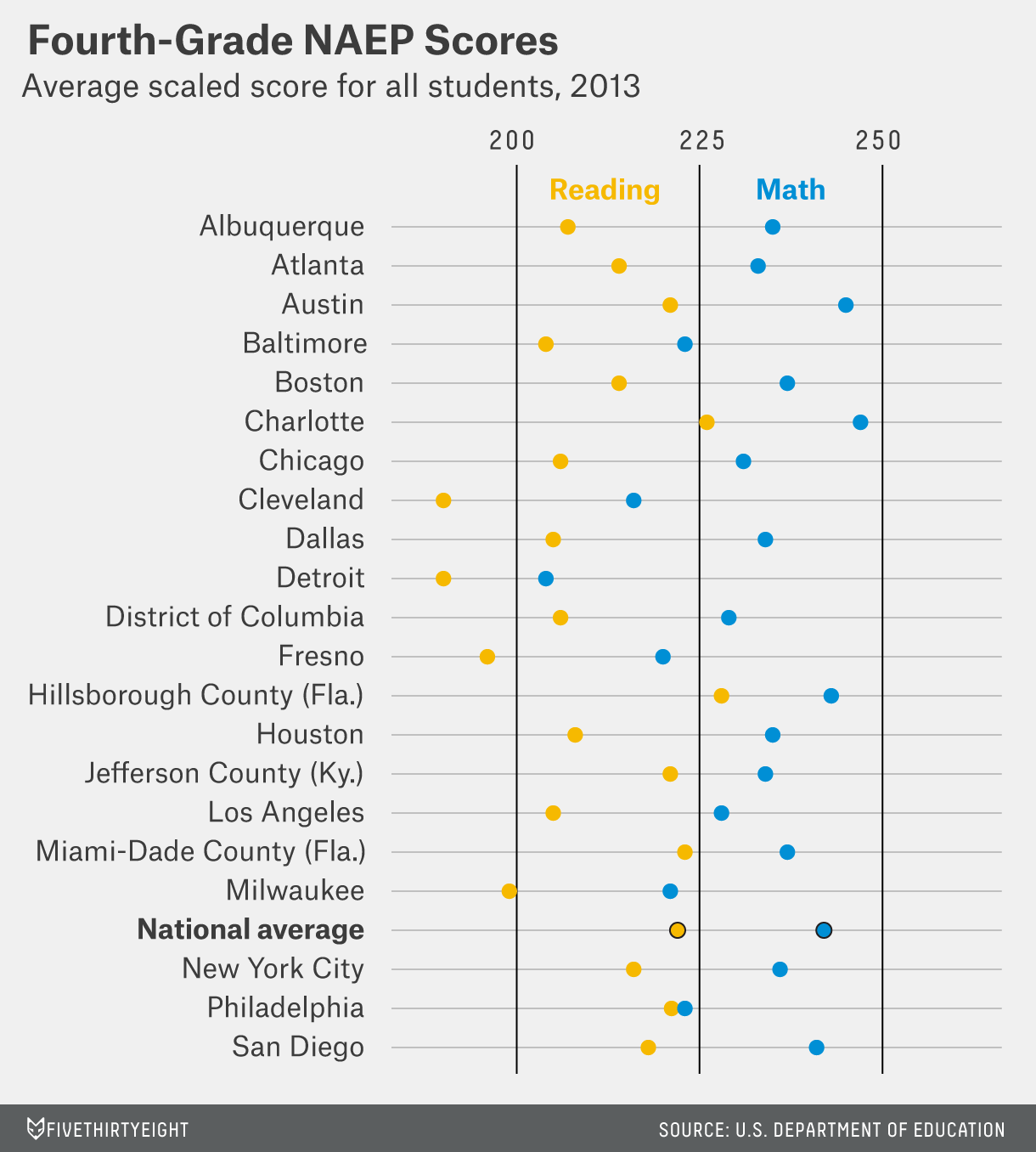 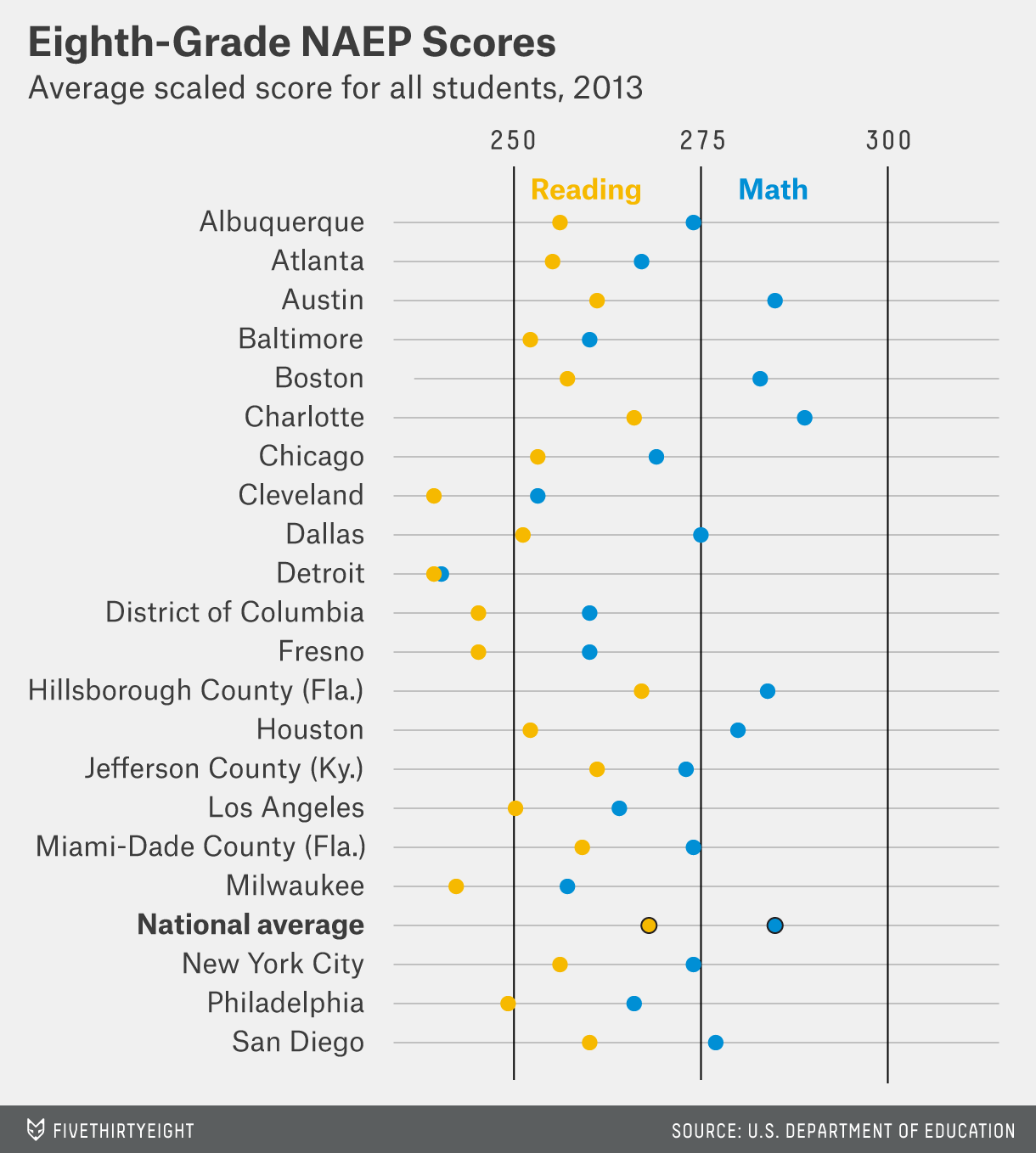 The Broad Foundation places heavy emphasis on what schools are doing to decrease achievement gaps between wealthier and low-income students and white students and minority students. The 2013 performance of the three most recent winners was strong among students eligible for free and reduced lunch and among black and Hispanic students. Charlotte was at or near the top for reading and math performance for all three types of students, while Miami was first or second on reading scores for free and reduced-lunch-eligible and Hispanic students. Houston was first or second in 2013 eighth-grade math scores for all three subgroups.4 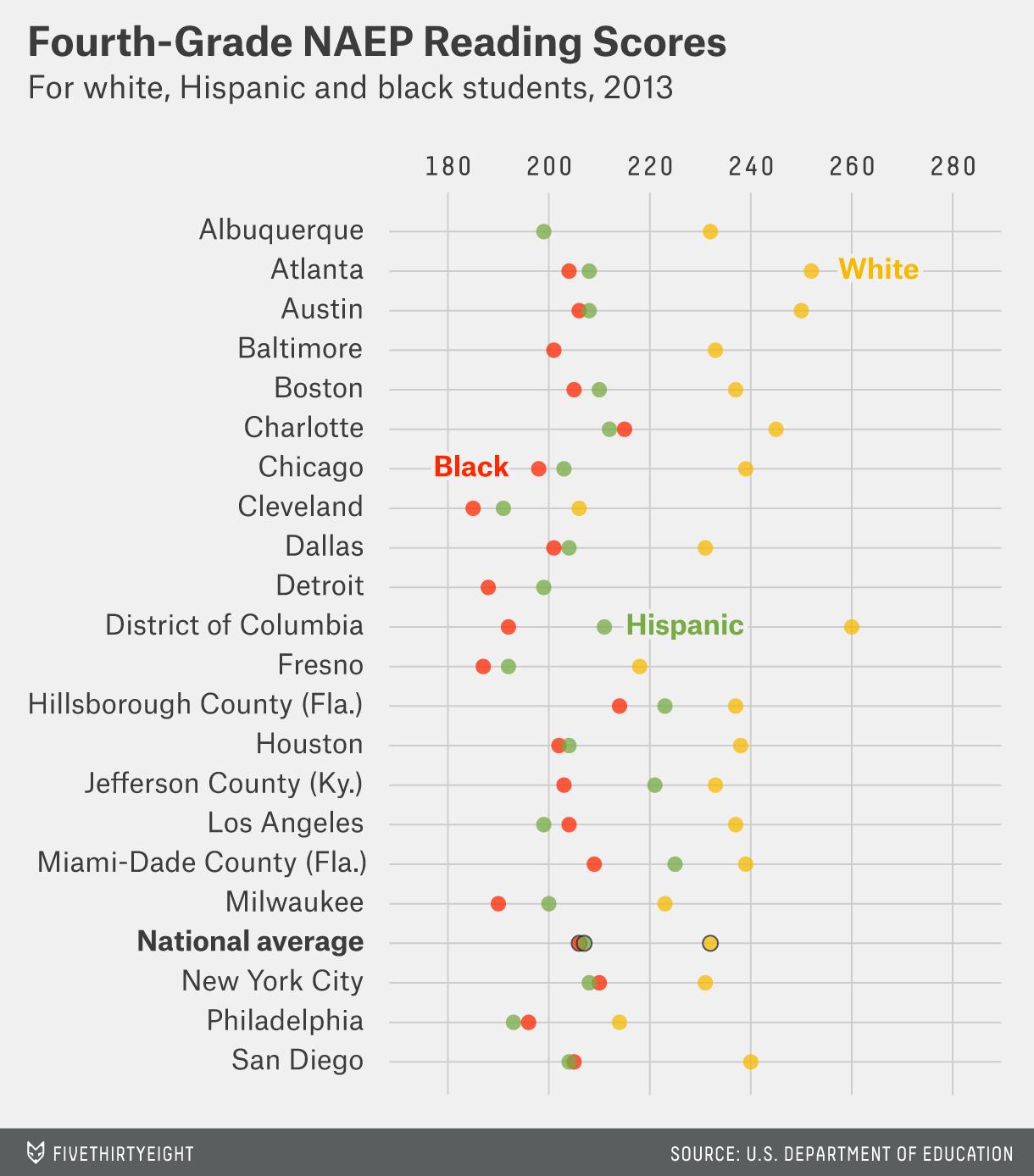 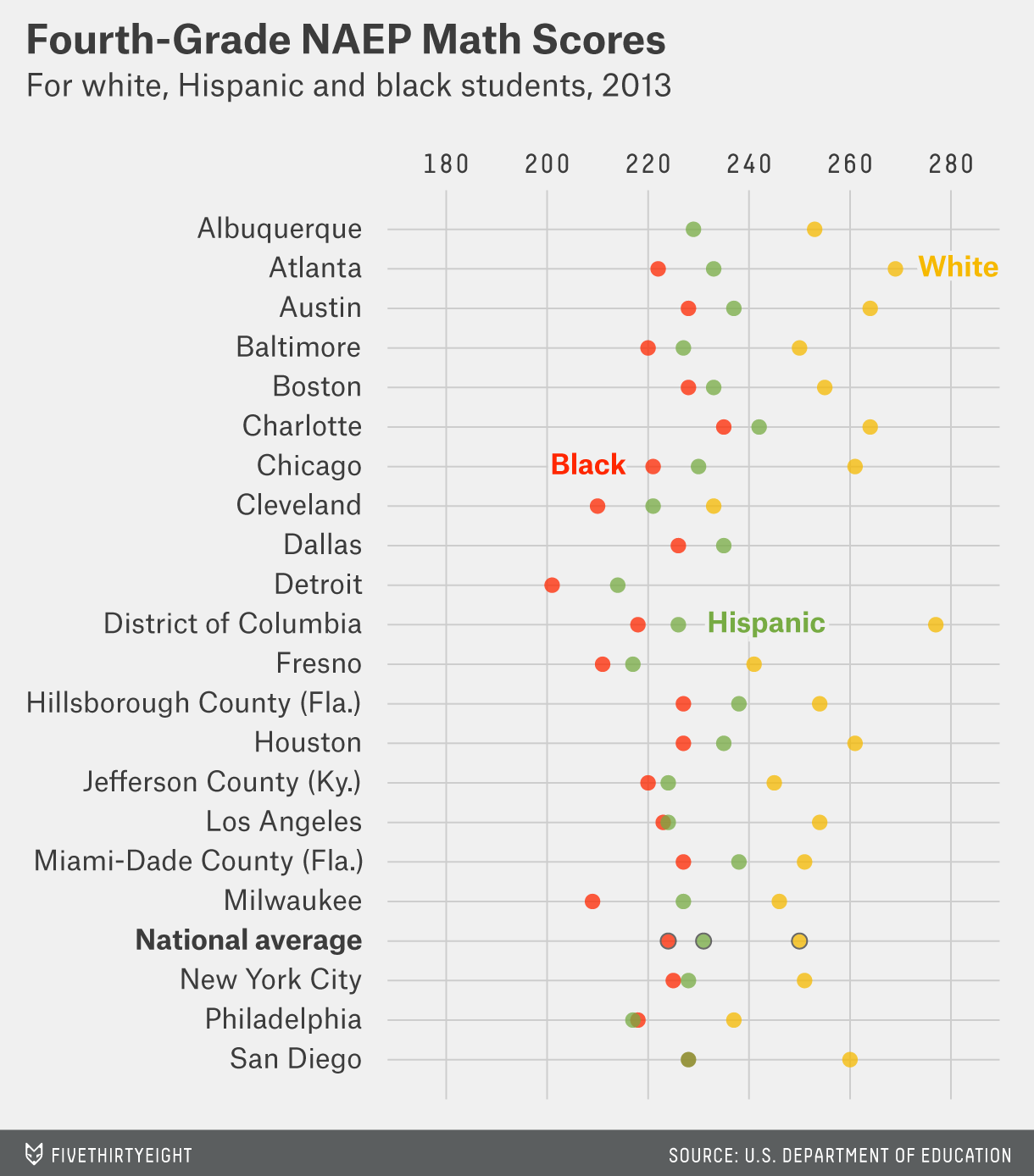 To put those numbers in perspective, Charlotte topped the national 2013 average overall and for all three subgroups for both fourth- and eighth-grade math and fourth-grade reading. Miami accomplished the same for fourth-grade reading, while Houston beat the national average in fourth- and eighth-grade math for black, Hispanic, and free- and reduced-lunch-eligible students.

The number of districts participating in NAEP has increased from six in 2002 to the present 21. As such, comparisons of growth over time are somewhat limited. Miami has only participated since 2009, but its performance between then and 2013 shows little improvement. Houston’s NAEP scores have been similarly stagnant; student performance overall and among low-income and black and Hispanic students actually declined on the fourth-grade reading test between 2009 and 2013. Miami’s performance on eighth-grade reading also declined in the same period. Other than the math performance of Houston’s eighth-grade black students, neither district has shown much improvement in math between 2009 and 2013. Boston and New York, other previous winners among the NAEP districts, also show mixed results. Both saw mostly stagnant or negative growth between 2009 and 2013 on fourth-grade math and reading overall and for black, Hispanic and free- and reduced-lunch-eligible students. Their results were stronger, however, for eighth-grade students in both districts. 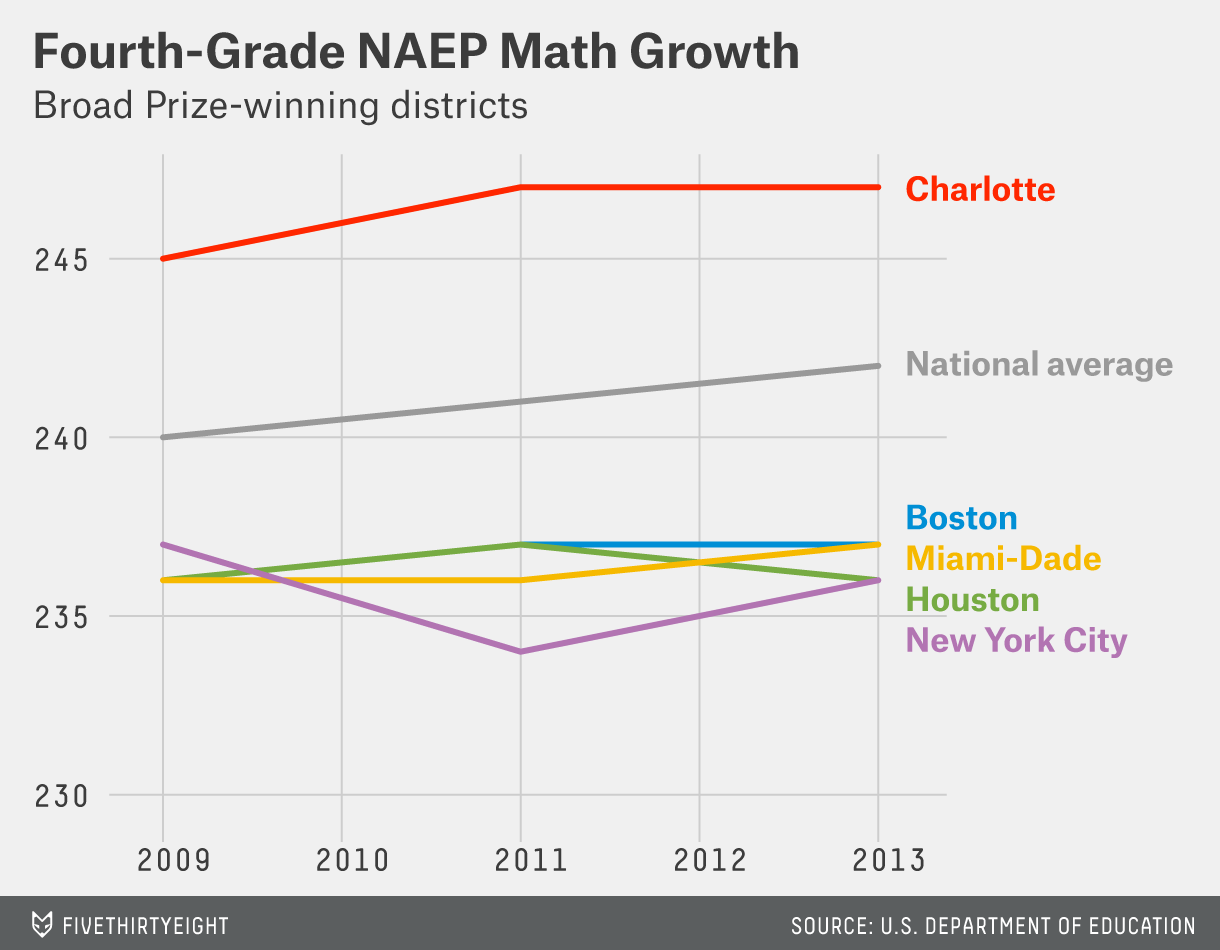 Some academics caution that testing declines could be related to demographic changes. Shelley Billig, a vice president at RMC Research, which oversees the site visits and evaluation of finalists for the Broad Prize, pointed out that many schools have begun to change their curriculums in recent years as they adjust to the national Common Core standards.

Still, even the Broad Prize review board made clear its frustration with the overall rate of growth in urban schools in naming only two finalists for the award this year — rather than the customary four or five. When the nominations were announced, Christopher Cross, a member of the review board and former U.S. assistant secretary of education, said the committee was “struck by how incremental progress has been in recent years and by how far our public schools still have to go to provide a world-class education for all children.”

While the prize has been criticized for its narrow pool of finalists and winners — 60 percent have come from Texas, California and Florida — Que, the prize director, said the review board would like to see more repeat winners as evidence of sustained academic gains. “We’re just not seeing any districts hit it out of the ballpark,” she said.

Even if one district were to stand out, Robert Slavin, a professor at the Johns Hopkins School of Education and the director of its center for research and reform in education, is skeptical that it could work as a blueprint for other districts. Although some of the curriculum is transferable between schools, he said that varying socioeconomic characteristics of different school districts — and the challenges they might present — require a tailored approach to school management. “What a district does is not designed for replication,” Slavin said. “It’s designed to address the problems of that district.”

Ben Wieder is a data reporter at the Center for Public Integrity in Washington, D.C. @benbwieder