In the course of researching an article about Albert Pujols, I looked at measuring a hitter’s “decision-making” skills at the plate. Some great work on the topic was done years ago by the great Russell “Pizza Cutter” Carleton (who now writes at Baseball Prospectus), and I’m not adding to the research except by updating it. (The Hardball Times’ Derek Carty also wrote on this topic many years ago.)

Basically, Russell’s idea was to apply signal-detection theory to baseball by measuring a hitter’s ability to discern balls and strikes compared to pitch-tracking systems such as  PITCHf/x. If the PITCHf/x strike zone says a pitch was a ball, but the player swung at it, that’s akin to a “false positive” — the player thought the pitch was in the strike zone when it wasn’t. If PITCHf/x says a ball was in the zone, but the batter didn’t swing, that’s a “false negative” — a hittable ball disregarded by the player. (Of course, swinging at a ball in the zone, or taking a pitch outside the zone, would be coded as correct decisions by the batter.)

This is all theoretical and a gross oversimplification of baseball in general. For instance, sometimes players have a good reason to lay off a pitch in the zone, and, conversely, sometimes they have to expand their strike zone because of the situation. Even so, it’s a fun application of the “Plate Discipline” section of stats at FanGraphs, which lists the percentages of pitches that were in the strike zone for each player, as well as the proportion of pitches swung at inside and outside the strike zone (as determined by Baseball Info Solutions‘ pitch-charting data, which goes back to 2002).

The best decision-making season in the data set belongs to Moises Alou in 2002. Alou faced 1,785 pitches, 54.5 percent of which were in the strike zone. Of those pitches in the zone, he swung at 80.1 percent, while he let all but 14.8 percent of balls outside the zone go by without a swing. As a percentage of his total pitches faced, then, Alou made the “correct” decision 82.4 percent of the time — the tops of any season in the FanGraphs data. 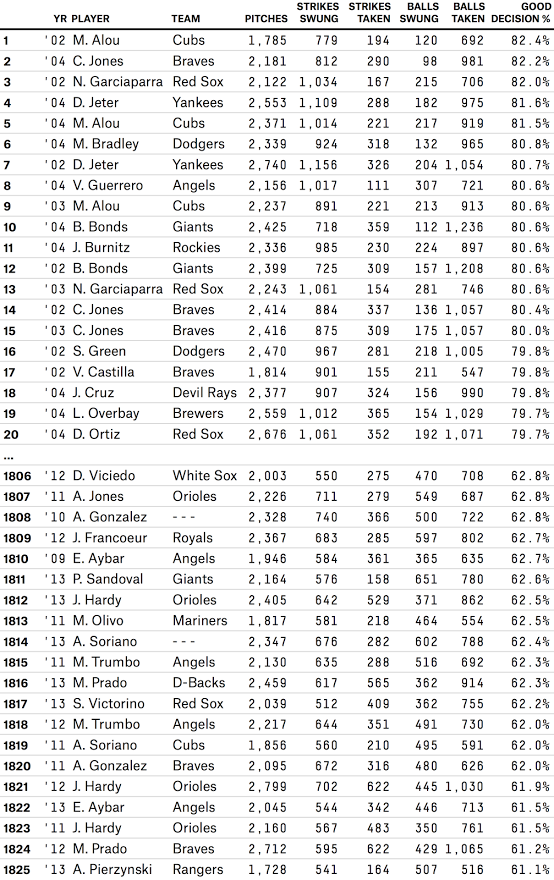 (I, too, was surprised that Vladimir Guerrero would should up as a positive example of plate discipline.)

Meanwhile, the worst decision-making season happened last year; A.J. Pierzynski spent the season swinging. Pierzynski correctly swung at 76.7 percent of pitches inside the zone (the Major League Baseball average was 65.5 percent), but he was undone by his hacking of 49.6 percent of balls outside the strike zone — about 1.6 times the rate of the average hitter. That gave him a “good decision” rate of just 61.1 percent. (For what it’s worth, no qualified season in the FanGraphs data saw a hitter swing more at pitches outside the zone than inside.)

Among active players, the best decision-maker by this metric (since 2012) is Dexter Fowler of the Houston Astros. Over the past three seasons, Fowler has made the correct decision 74.2 percent of the time, swinging at 71.9 percent of balls in the strike zone and laying off 75.9 percent of pitches outside the zone. 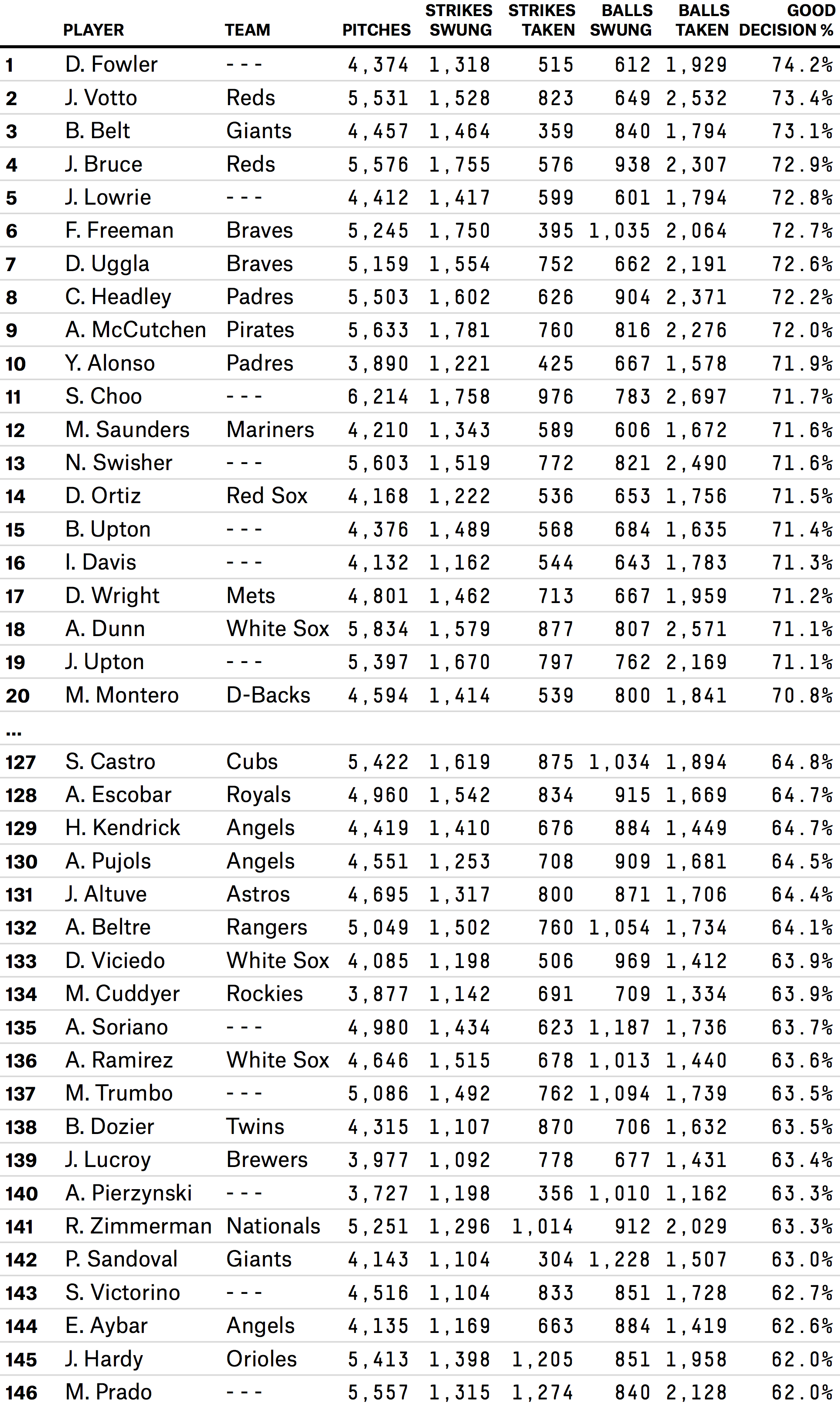 And the worst? Martin Prado of the Arizona Diamondbacks made the correct call on only 62 percent of the pitches he faced. But unlike Pierzynski, who had the worst decision-making season of anyone since 2002 because he hacked too much at pitches outside the zone, Prado comes in last among active players because he wasn’t aggressive enough on pitches inside the zone. The average MLB player offers at about 66 percent of pitches inside the strike zone, but Prado has only swung at 50.8 percent of balls in the zone over the past three seasons. Prado does a good job at avoiding swings on balls outside the zone, but he can’t seem to tell when a hittable ball is coming in over the plate, often committing what statisticians would call false negatives, or Type II errors.

Again, this metric is by no means a perfect gauge of plate discipline. There are many situations in which it would be a suboptimal strategy to strictly follow the “good” or “bad” decision algorithm measured by the charts above. But it’s illuminating to begin to measure which players appear to have the best and worst conceptions of the strike zone as determined by an objective standard.