While the weather might not indicate it, following the release of “Captain America: The Winter Soldier” in early April and “The Amazing Spider-Man 2” last week, we are firmly in the summer blockbuster season. Last Friday, we tried to quantify what exactly makes a movie a blockbuster. And while it was fun to track the incidence of various plot elements over time, one question I didn’t get to was which film hews closest to the platonic ideal of the summer blockbuster.

The answer, as it turns out, is “The Dark Knight” (2008). According to my research, Christopher Nolan’s brooding Batman film is the blockbuster to beat all blockbusters, the one that checks the most boxes when it comes to popular features of contemporary cinema.

To figure this out, I analyzed Internet Movie Database tags for films that met three criteria: a minimum of 50,000 ratings, the plot keyword “blockbuster” and a release date after 1975 — the year “Jaws” came out. These IMDb plot keyword tags are assigned by users and maintained by editors, and may describe anything about a film — relationships among characters, plot elements such as “showdown” or “gunfight,” stock character types such as “warrior” and “dog,” and even broad concepts such as “violence,” or specific props such as “helicopter.”

Scroll down to the bottom of this post to see the 50 most popular plot keywords among the blockbuster films in the set. This tag list could provide a sort of Mad Libs game for moviemakers: Just put all the parts together and you have a blockbuster!

The list includes plenty of violence: “murder,” “martial arts,” “death.” Since many blockbuster films are big-budget summer action flicks, we also get classic action-movie tropes like “rescue,” “brawl” and “flashback scene,” and themes of “revenge” and “betrayal.”

We can also get an idea of some of the characters and relationships anchoring blockbuster movies — “tough-guy” heroes, developing “friendships,” perhaps a “father-son” dynamic to get the pathos on. Then of course you’ve got “explosions.”

If all of the above sounds like “The Dark Knight,” it should. The film satisfies 19 of the top 20 blockbuster-associated tags on the list. The only one it’s missing is “character-name-in-title.” And since the eponymous Dark Knight is Batman, we can sort of count that one, too.

Even when we consider the top 50 tags, “The Dark Knight” remains lord of the blockbusters, with 44 associated tags. That’s 16 percent more than the next closest blockbuster, “Man of Steel” (2013).

Here’s the list of the 25 most blockbuster-y blockbusters, according to our definition, released since 1975: 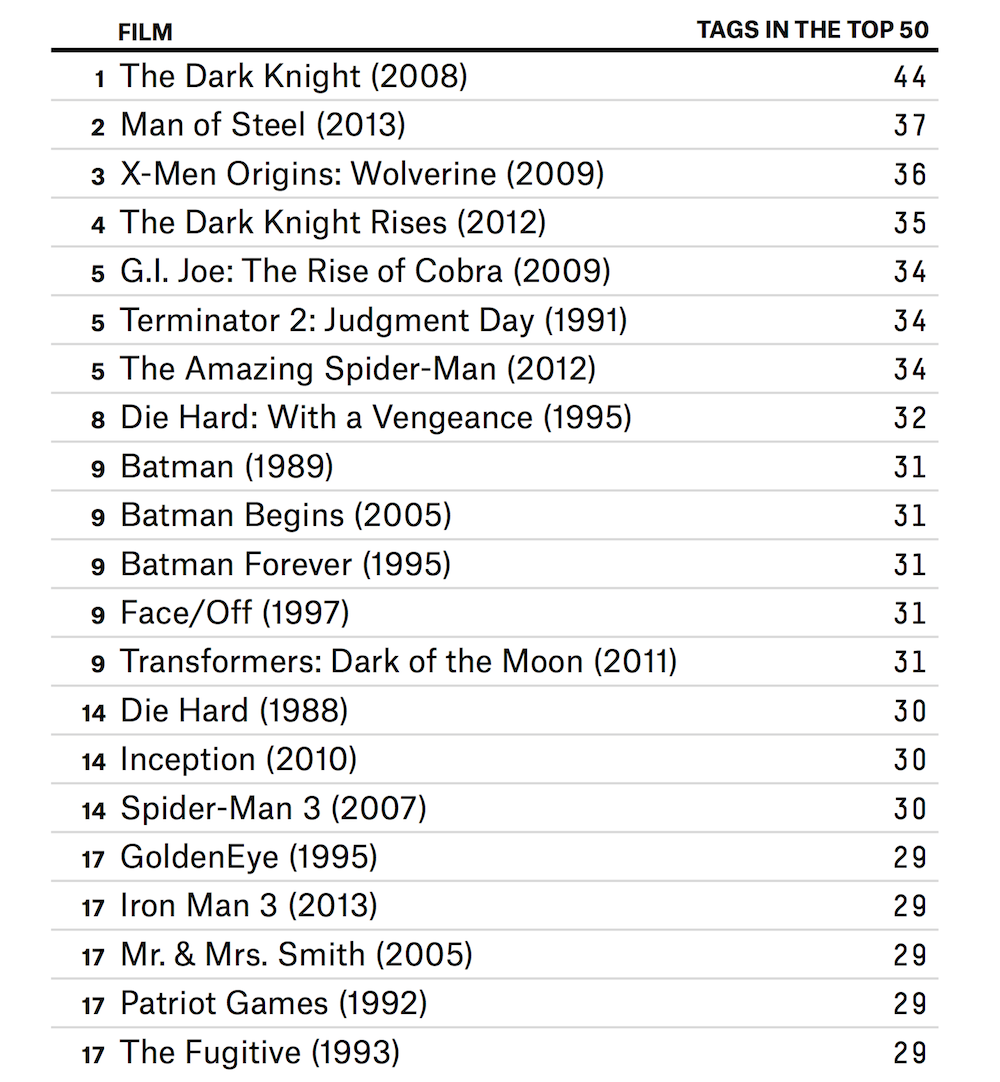 It’s noteworthy that 60 percent of these films have come out since 2000. Maybe filmmakers are getting better at giving the people what they want. Maybe the studios’ emphasis on commercial success has driven moviemakers to become Mad Libs-players.

Looking more closely at the list, it’s also easy to see why Hollywood has developed so many superhero movies in the past decade: They tend to share the characteristics of blockbuster movies. When you rank the blockbuster films by the number of top-50 tags associated with them, the first five are all superhero movies. Of the most blockbuster-like 25 films, half are superhero flicks.

Check out the full list of the top 50 most common IMDb tags associated with movies also tagged “blockbuster” below.