How many governors can you name off the top of your head?

There are probably fewer than 10 that most politically plugged-in people can rattle off — Walker, Cuomo, Christie and Perry, for example — and then a second tier of people you hear about occasionally — Hickenlooper and Martinez types — but eventually you get to a level where most people have absolutely no idea who these governors are.

One reason is that if a governor doesn’t want to be nationally known, most Americans are happy to oblige him. It’s not a national office. The other is that many governors are not even that well known in their own states.

When we talk about approval ratings, we mostly talk about “approve” or “disapprove.” But there’s another category that shows how little many people care about this sort of stuff: the “no opinion/don’t care/don’t know” response. We can use those responses to see which state is most indifferent to its own governor.

So who is the most “meh” chief executive in the United States?

We looked at the three most recent non-Rasmussen polls in the past year that asked for approval ratings, if available. In some cases we found fewer than three, and in other cases we found more. In the latter case, we selected the three most recent polls from different pollsters to get a wider look. We then averaged the “I don’t know” answers. We found at least one recent poll for 35 states. 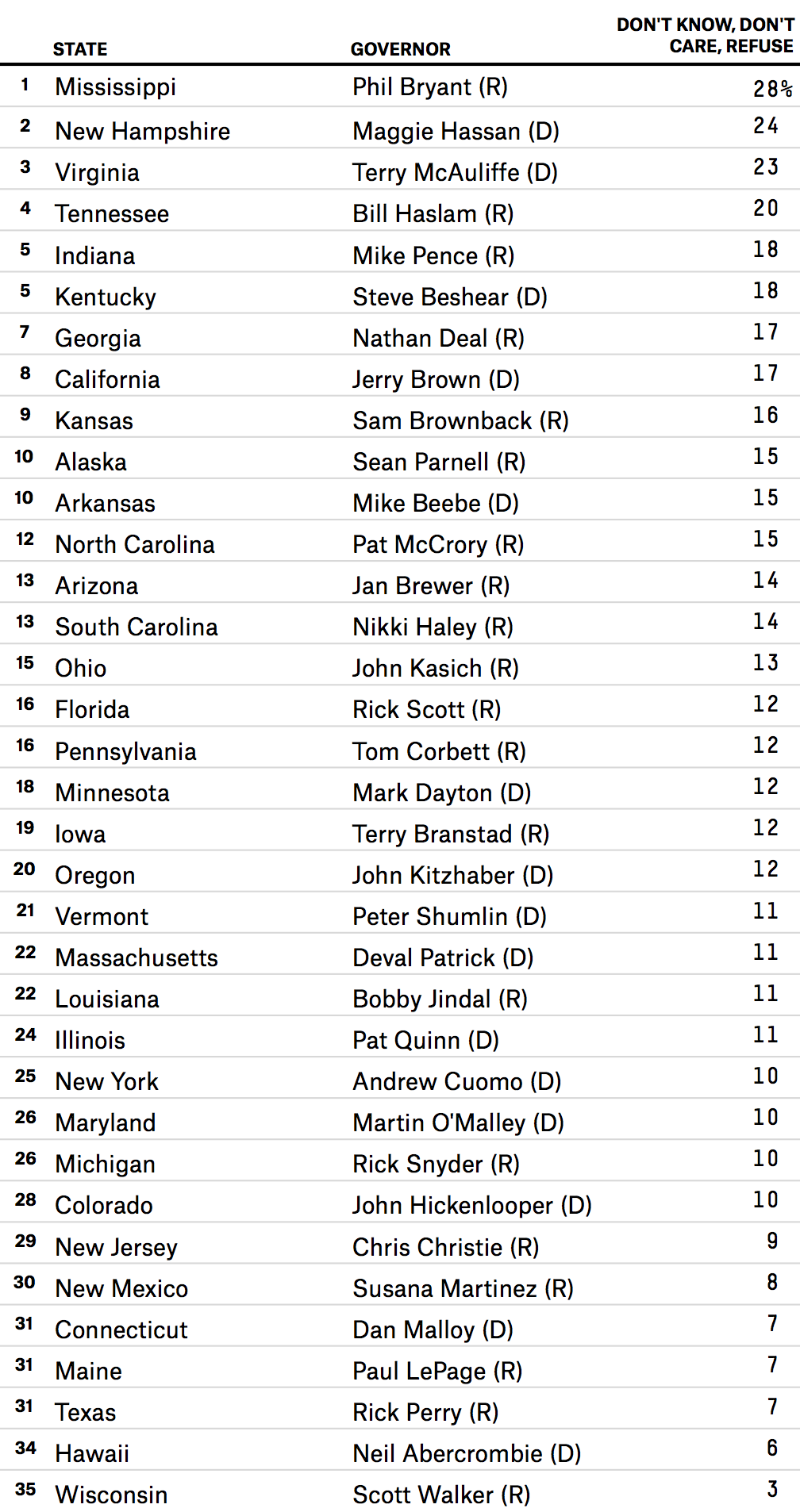 The governors whose constituents felt most neutral tended to be those who likely won’t face vigorous re-election campaigns. That means there aren’t a lot of negative attacks coming their way to knock them down and they won’t need to defend themselves — a situation that could boost their ratings.

Phil Bryant, a Republican in deep-red Mississippi, won his first election by 22 percentage points. Bill Haslam, a Republican in deep-red Tennessee, leads in his re-election bid this year by 20 to 30 percentage points. Maggie Hassan is up by 20 points in her re-election campaign in New Hampshire. Kentucky’s Steve Beshear, meanwhile, is in his second term and will not be running for a third, so he doesn’t attract much controversy.

On the other hand, it will be interesting to see if voters begin to form more of an opinion of Sam Brownback of Kansas and Nathan Deal of Georgia. Both are caught in tough re-election campaigns that will involve a lot of mudslinging.

One thing to note is that we don’t put much stock in the high “I don’t know” results for Terry McAuliffe in Virginia. He’s the only first-term governor to take office within the last year, too short of a tenure for Virginia residents to judge.

Now for the governors who inspire the least neutrality. Only 3 percent of Wisconsin residents were neutral on Scott Walker, who survived a recall election in 2012. Some of his policies have been deeply polarizing, and he is often mentioned as a possible contender for the GOP presidential nomination in 2016. Following him are Neil Abercrombie of Hawaii (6 percent neutral), who recently lost his primary election for a second term, and Rick Perry of Texas, who ran for president in 2012 and may do so again in 2016.

We weren’t able to find polls for Alabama, Delaware, Idaho, Missouri, Montana, Nebraska, Nevada, North Dakota, Oklahoma, Rhode Island, South Dakota, Utah, Washington, West Virginia or Wyoming, so it’s of course entirely possible that one of those governors beats Bryant on boringness. But based on what we can see through the polls, the Mississippi governor is leading in the Most Boring Governor competition.