On Sunday night, the New York Rangers took a 3-1 lead over the Montreal Canadiens in the NHL’s Eastern Conference finals, thanks to a game-winning goal by Martin St. Louis six minutes into overtime of Game 4.

It was the sixth goal of the playoffs for St. Louis, who was acquired by the Rangers in a trade with the Tampa Bay Lightning on March 6. In 19 regular-season games with New York after the trade, St. Louis didn’t produce much of note — just one goal and seven assists — but he’s been the Rangers’ most productive offensive player during the playoffs, generating 5.1 goals created in 18 games this postseason.

St. Louis’s performance during New York’s playoff run had me thinking about other players who were acquired during the season and played a major role in their teams’ playoff charges. We can try to measure how important a player’s basic offensive production was within the context of his team by dividing his goals created by the total number of goals scored and allowed by the team during the playoffs. For example, the Rangers have scored 49 goals and allowed 38 during the 2014 playoffs, so St. Louis’s 5.1 goals created represent 5.8 percent of the goals scored in the Rangers’ playoff games.

If we do this for every player whose team made the conference finals since the NHL expanded in 1967-68, we see that St. Louis’s rate ranks 20th among players who joined their playoff team during the regular season. Here are the leaders: 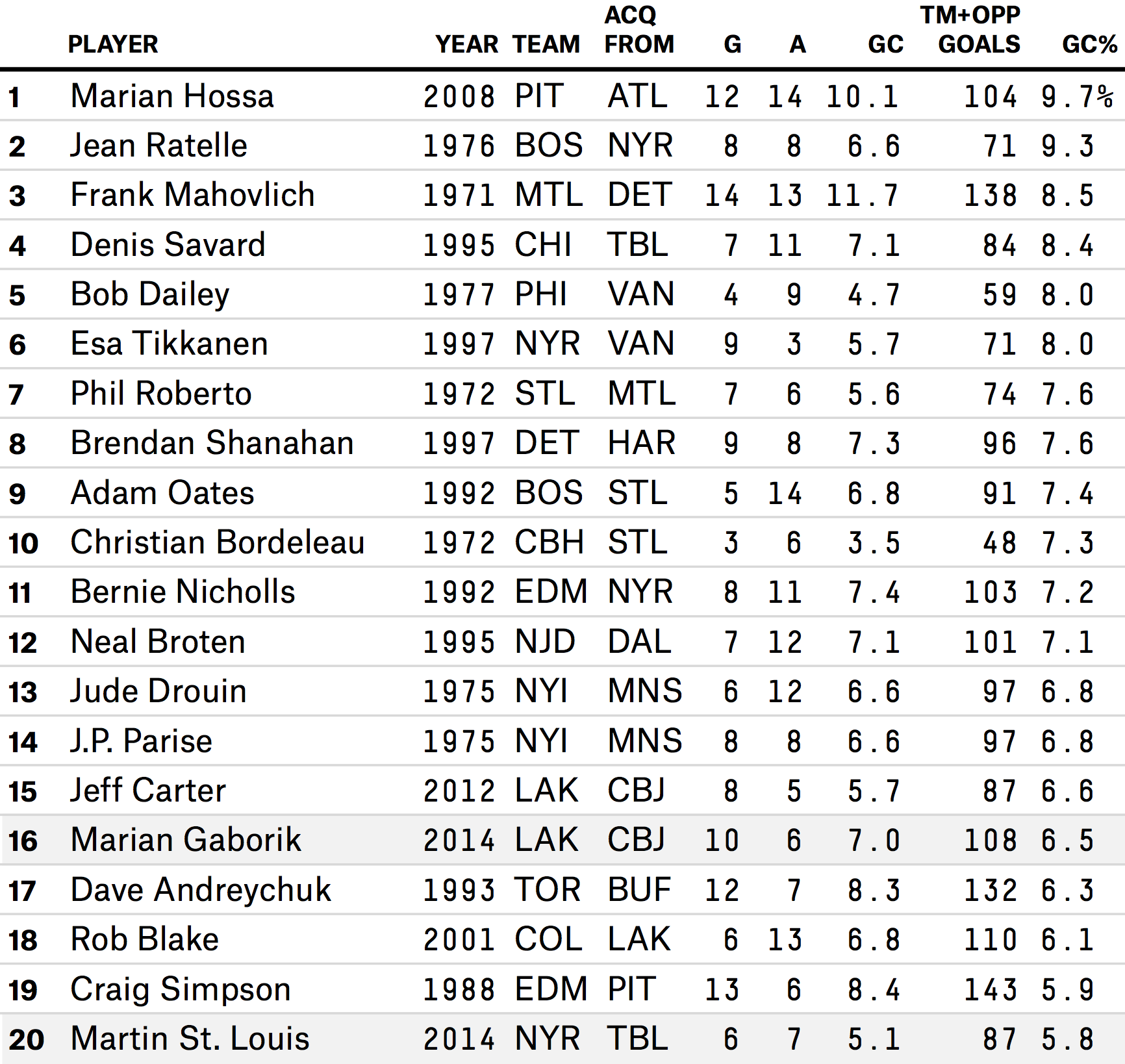 St. Louis has gotten a lot of press during the playoffs for spearheading the Rangers’ attack, but by this metric he hasn’t even been the most impactful midseason pickup by a 2014 conference finalist. Marian Gaborik of the Los Angeles Kings, acquired from the Columbus Blue Jackets around the same time St. Louis was packing his bags for New York, has created 6.5 percent of the goals scored during Los Angeles’s playoff games this year.

Gaborik doesn’t get as much attention because he’s been the Kings’ third-leading playoff scorer behind Anze Kopitar and Jeff Carter. According to these numbers, though, he’s had a hand in a slightly larger share of the available scoring than St. Louis has.