The New York Mets are on some kind of tear right now. With a 9-4 victory over the Philadelphia Phillies on Wednesday night, the Mets have won 21 of their last 29 games — a run that dates to July 25 and the handful of player acquisitions the team made before MLB’s trade deadline.

The biggest catalyst for New York’s sudden success has been a vastly improved offense. Over that red-hot 29-game stretch, they’re averaging 6.2 runs per contest, or 46 percent more than the National League average.1 By contrast, the Mets were scoring just 3.4 runs per game before their hot streak began, or 11 percent below the NL average. New York’s shift from ranking 26th in park-adjusted runs per game2 through July 24 to No. 1 in the month-plus since is by far the biggest offensive turnaround any team enjoyed over that span: 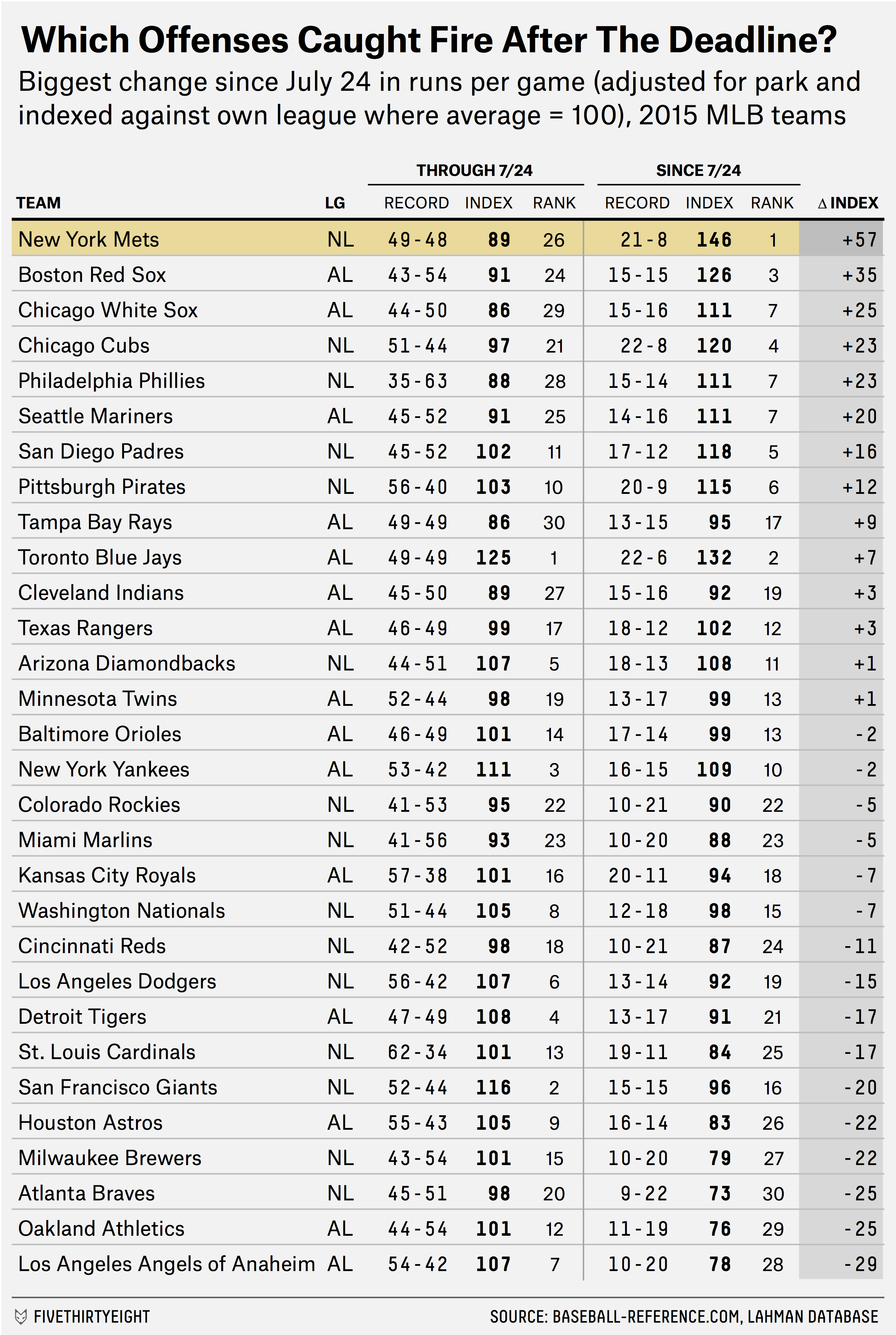 But how much of this improvement should we expect the Mets to retain going forward? To get a general sense of how much regression to the mean tugs on scorching August performances like those of the 2015 Mets, I gathered Retrosheet data on all MLB teams in the expansion era3 and measured how much of a team’s August scoring-index boost (relative to its scoring index through July) carried over into September and October.4 The effect was slight, but significant: About 21 percent of a team’s August hike in scoring rate is “real,” in the sense that it can be expected to continue into subsequent months.

And the Mets have reason to believe they can hang on to more than 21 percent of their offensive gains. One of their trade-deadline pickups, outfielder Yoenis Cespedes, leads the team in offensive runs above average over the past 30 days. So at least part of New York’s scoring surge is due to talent they’ve added since July (as opposed to existing players simply hitting better, which is less sustainable). And, as our friend Jonah Keri pointed out Monday, the Mets also have the easiest schedule in baseball over the remainder of the season.

Combine it with New York’s 86 percent probability of making the playoffs, and the Mets are looking like a far more credible World Series threat than they were earlier in the season.