Where is the loudest place in America? You might think New York City, or a major airport hub, or a concert you have suddenly become too old to appreciate.

But that depends on what kind of noise you’re measuring. Sound is actually a physical thing. What we perceive as noise is the result of air molecules bumping into one another, like a Newton’s cradle toy. That movement eventually reaches our eardrums, which turn that tiny wiggle into an audible signal. But human ears can’t convert all molecular motion to sound. Sometimes the particles are jostling one another too fast. Sometimes they’re too slow. Sometimes, the motion is just happening in the wrong medium — through the Earth, say, instead of through the air.

And when you start listening for the sounds we can’t hear, the loudest place in America can end up being right under your feet.

Scientists have tools that can detect these “silent” waves, and they’ve found a lot of noise happening all over the U.S. Those noises are made by the cracking of rocks deep in the Earth along natural fault lines and the splashing of whitecaps on the ocean. But they’re also made by our factories, power plants, mines and military.

“Any kind of mechanical process is going to generate energetic waves, said Omar Marcillo, staff scientist at Los Alamos National Laboratory. “Some of that goes through the atmosphere as acoustic waves, and some goes through the ground as seismic waves.” Marcillo’s work focuses on the seismic.

When researchers track seismic activity, they’re sensing the waves that make the Earth roll and rumble, of course. But those waves aren’t that much different than what we hear as sound. Some kinds of waves produced by earthquakes have even been known to generate sounds that people can hear before the ground starts to shake beneath them. And, along the way, their instruments also pick up the relatively small vibrations of very loud machines, including the spinning blades of wind turbines and hydroelectric dams.

Marcillo is trying to map these sources of small seismic signals in order to help other scientists track very small earthquakes that could help predict big, dangerous natural disasters. Right now, it’s hard to tell what’s a baby quake and what’s people being loud. “If you can understand the background noise, then you can better detect a signal,” he said.

To do that, Marcillo and his team used data collected over a decade by the U.S. National Seismic Network — 100 stations that track the movement of the ground all over the country. They combined that data with information about nearby industries to start figuring out which noises were likely human-made. “We’d have operational data telling me a wind farm started up, and I could see a signal emerging in the data within a couple months,” he said.

The result is a map that shows some big regional differences in seismic noise, with the wind-heavy Plains states showing up as “loudest.” 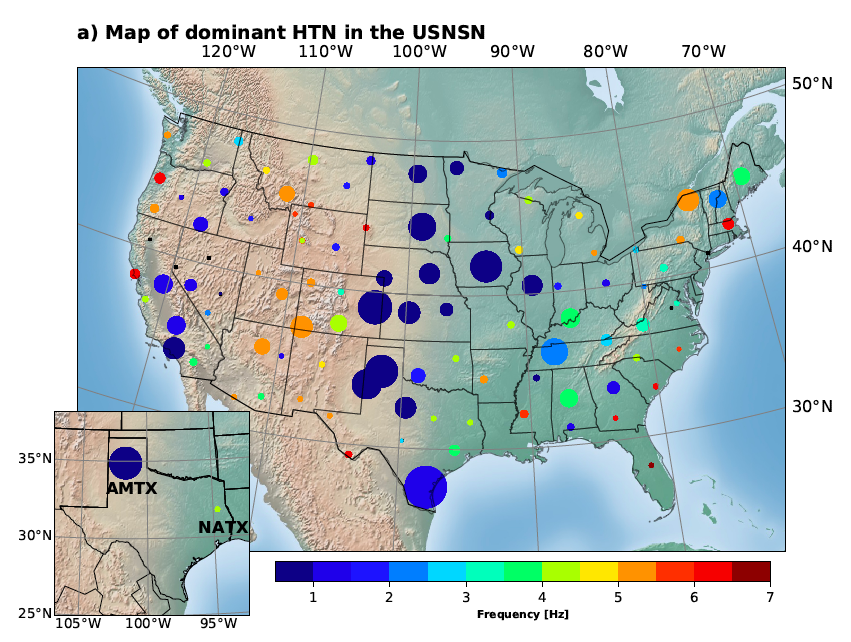 But if what you’re measuring is infrasound, it’s Nevada causing a racket. Infrasound travels through the air, just like the stuff we can hear does, but in this case, the molecular jiggles and vibrations are happening too slowly for our eardrums to convert them into information our brains understand. Infrasound can travel long distances and is often the unheard ripples set off by an audible sound that happened far, far away.

Back in 2011, Scripps Institution of Oceanography researchers Catherine De Groot-Hedlin and Michael Hedlin, who are married, mapped infrasound across the country by adding infrasound sensors to 400 existing seismic detection stations that are part of the USArray, a continent-wide seismic observatory. Their analysis spotted mining blasts, rocket launches and other sharp spikes in infrasound activity. They weren’t able to pick up the constant hum of a wind farm, De Groot-Hedlin said, but they could see daily upticks that coincided with working hours at mines. “You can see lunchtime [in the data],” she said.

In their data, it’s Western states like Nevada, Utah and Idaho that turn up loudest, probably the result of nearby military facilities.

Like Marcillo’s map, the map created by deGroot-Hedlin and her husband is meant as a jumping off point for further research: a sort of catalog of sound. The idea is that other scientists can refer back to their research later, to figure out why they’re getting a weird reading, to better understand atmospheric phenomena that also affect how infrasound travels, or to better understand how infrasound itself might affect things like bird migration.

In both cases, the map is less about where the loudest place is and more about how it got that way — i.e., people and the stuff we do. Turns out, to understand the world around us, we sometimes have to tune ourselves out first.