Pick up a copy of Wednesday’s Wall Street Journal, and you’ll see a pretty remarkable headline stripped across the top of page one: “Global Oil Glut Sends Prices Plunging.” U.S. oil prices have fallen to $82 a barrel, down from more than $100 in midsummer. Global prices have fallen even faster. Retail gasoline prices, which usually lag crude prices, are down 21 cents over the past month, to $3.18 a gallon, and could drop below $3 in the weeks ahead. 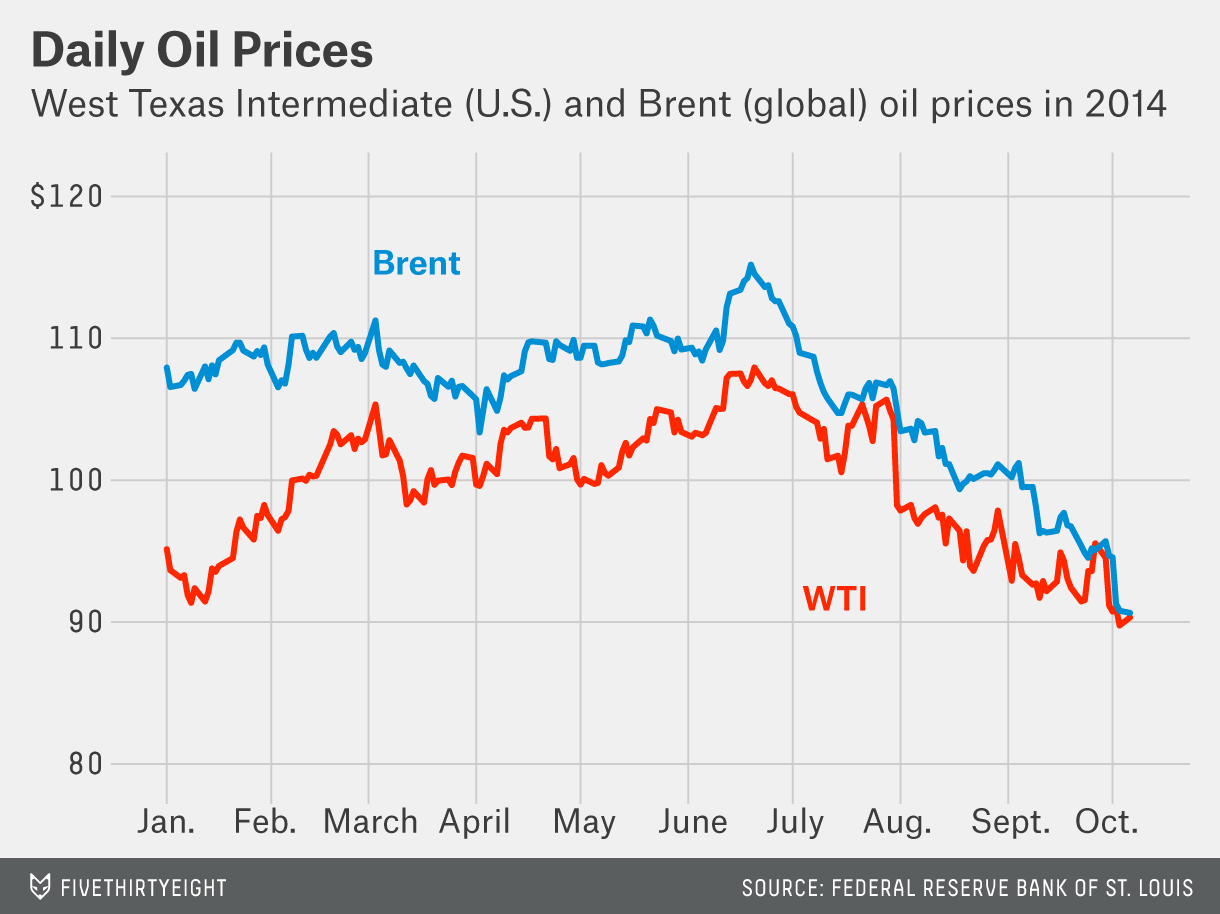 The Journal and other sources cite a pretty straightforward confluence of factors to explain the drop in prices. The fracking-driven surge in U.S. oil production has provided the world with an unexpected new supply of oil at a time when weak economic growth is cutting into demand. The International Energy Agency on Tuesday cut its projection of how much oil the world will need in 2015.

In a normal market, this kind of behavior would be unremarkable. Supply is up, and demand is flat, so prices are falling. But oil isn’t a normal market. About a third of global oil supply is controlled by the 12-member OPEC cartel. The whole idea of a cartel is that the members work together to limit supply to keep prices higher than they would be in a free market. In the past, OPEC has done exactly that; when prices have fallen, members have agreed to rein in production until prices stabilize. This time, however, prices have been falling for three months and the cartel has done little to tighten the spigot.

To see what’s going on, it helps to understand a bit about OPEC’s internal politics. Like all cartels, OPEC has what economists call a collective action problem: All members benefit if they work together to limit oil production, but it’s in each individual member’s interest to sell as much oil as possible. This has been a particularly big issue in recent years because several of OPEC’s members have become dependent on high oil prices to balance their budgets. Countries like Venezuela can’t afford to let prices fall, but they also can’t afford to pump less crude.

OPEC’s solution in recent years has been Saudi Arabia, the cartel’s biggest producer and de facto leader. The Saudis are more financially stable than many other OPEC members, and they have been willing to play the part of the “swing” producer, pumping more oil when prices rise and less when they fall. But there are signs the Saudis are losing patience with that role. They recently cut prices for Asian customers, suggesting they would rather let prices fall than give up more market share. 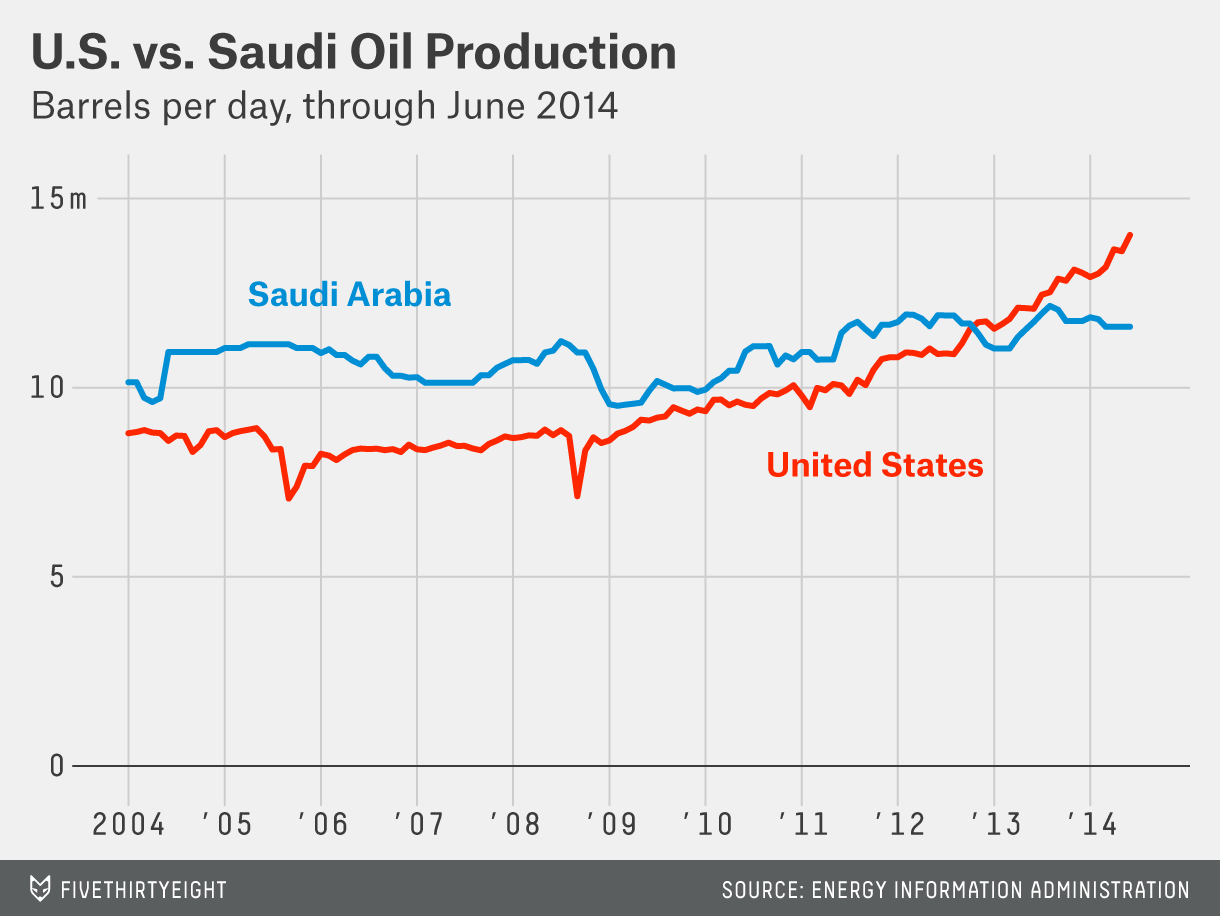 It’s hard to know where things will go from here. The Saudis may decide the recent drop in prices has gone too far. Earlier this week, a prominent Saudi prince publicly questioned the government’s policy of allowing prices to fall. It’s also possible prices are dropping more than they should based on supply and demand alone; in recent days, investors have fled stocks and other risky assets amid fears of a global economic slowdown. If those fears ebb, oil prices could rebound.

Whatever happens in the short term, the recent decline in prices provides evidence the U.S. oil boom is affecting global markets more than experts sometimes acknowledge. In global terms, the recent increase in U.S. production has been modest, the equivalent of about 5 percent of total world oil supply. But that production is more significant because it comes from outside OPEC’s grasp, forcing the cartel either to pump less or accept lower prices – and exacerbating rifts within the group as members fight over which option to choose.

CLARIFICATION (Oct. 15, 7:57 p.m.): Several readers had questions about the chart showing the U.S. surpassing Saudi Arabia in oil production. The chart, based on data from the Energy Information Administration, shows what the EIA calls “Total Oil Supply,” a category that includes not only crude oil but also natural-gas liquids (used mostly in chemical production) and ethanol (derived from corn or other plants). U.S. crude oil production is still about a million barrels a day behind Saudi Arabia, although it’s gaining fast. 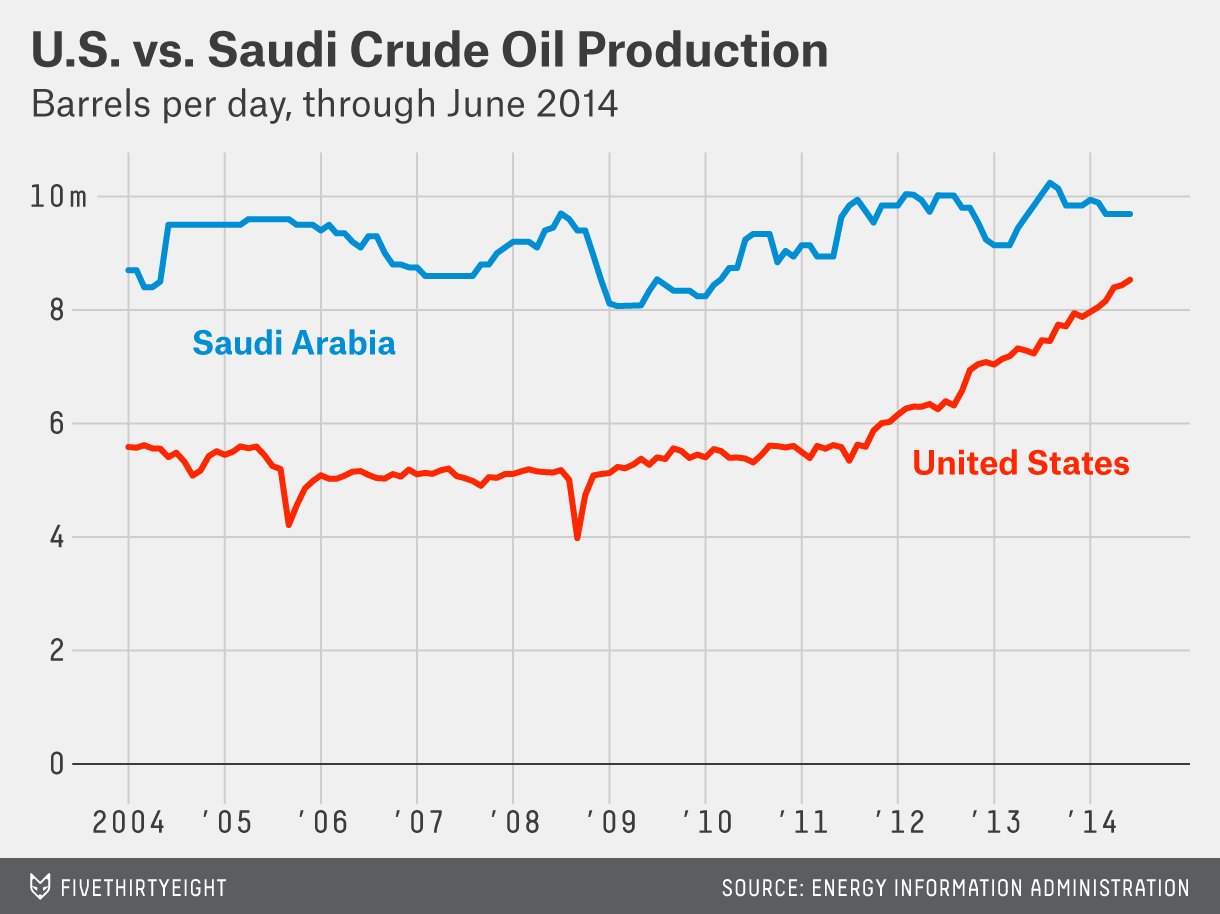