Hard as it may be to believe, Election Day is now less than five months away. And at this point, former Vice President Joe Biden has a clear lead over President Trump in the national polls. But recent state-level surveys also give Biden an edge over Trump in a number of key swing states. And of course, how Trump and Biden do at the state level matters the most, as that’s how the outcome in the Electoral College will be decided.

With that in mind, we thought it would be helpful to update where things stand in state-level polls of the presidential contest, like we did at the beginning of May. To do this, we gathered all the state polls in FiveThirtyEight’s polling database conducted since May 1 and then averaged them. And right now, the state polls largely agree with what the national surveys show: Biden holds the lead. In fact, he has about a 2-to-8-point lead in some of the most important states in the Electoral College. There is one notable caveat, though, which we’ll get to in a moment. (Additionally, what’s captured here might not reflect how things have changed after an unexpectedly positive job report, or how public opinion might have shifted in response to the national protests that followed George Floyd’s death.)

But first, let’s start with what the polls say in battleground states where we have at least three polls in the past six weeks. Together, they mostly present good news for Biden, and perhaps the most notable takeaway here is Biden’s sizable lead in Michigan and Wisconsin.

Trump carried Michigan and Wisconsin in 2016, albeit by less than 1 point, but Biden’s comfortable margin in these recent surveys could spell trouble for Trump. However, both states’ polls offered a range of snapshots — in Michigan, Biden led by anywhere from 2 to 15 points, and in Wisconsin, the race ranged from a tie to Biden +9.

In Michigan, the most notable result comes from long-time Michigan pollster EPIC/MRA, which found Biden up by 12 points in a poll conducted between late May and early June, 53 percent to 41 percent. For context, in 2016 the pollster never found Hillary Clinton with more than 47 percent in a single general election poll. However, in Wisconsin, Biden’s lead might not be that secure. The Marquette Law School Poll — often seen as the gold standard in the Badger State — had Biden up only 3 points in early May, 46 percent to 43 percent. Biden and Trump also ran about even in Pennsylvania, another pivotal state in 2016, which might seem at odds with the data from Michigan and Wisconsin. But unlike those states, Pennsylvania didn’t have any surveys from highly rated pollsters, and what they found was a bit noisy — two put Trump up by 4 to 5 points, while another put Biden ahead by 9 points. We wouldn’t read too much into this yet without higher quality polling, but the inconsistent results here could be evidence that Pennsylvania will remain competitive.

As for the polling picture in the Sun Belt states — Arizona, Georgia and Texas — they all seemed more or less in line with what you would expect, once you account for Biden’s lead in the national polls and how these states voted in 2016. But they do signal potential trouble for Trump. For instance, the fact that Trump carried Arizona by 3.5 points in 2016 seems to have been erased by Biden’s polling lead. On average, Biden led by 3 points, including a high-quality early June survey from Fox News that showed him up 4 points. In Georgia and Texas, on the other hand, Trump was still in the lead, by 1 and 2 points, respectively. Yet this is not as cushy of a margin as one would expect for Trump, considering he carried Georgia by 5 points and Texas by 9 points in 2016. If this trio of states are all in play — and Arizona is possibly even leaning Democratic — that would give Biden many additional paths to 270 electoral votes.

Polls in Florida, the über swing state, also tilted slightly toward Biden, though we didn’t have much in the way of high-quality polls here. These surveys all gave Biden a narrow lead ranging from 1 to 5 points. Meanwhile, North Carolina’s eight polls suggest a competitive race in the state — collectively, the results ranged from Trump by 3 points to Biden by 4 points, averaging out to about even.

There are two big takeaways here. One, Biden is in an enviable position in many of these battleground states. However, the second takeaway — which is the caveat we mentioned earlier — is that all of these battleground states save Michigan are more Republican-leaning than the national average. In other words, most of the states that will decide the presidential election are to the right of the country as a whole, and that speaks to Trump’s advantage in the Electoral College. Should Biden continue to hold a sizable lead, the chances of an Electoral College-popular vote split will probably be low. But if the polls get closer, the odds will increase because the eventual tipping point state is almost certainly among these eight states. But as it stands now, if Trump carries Arizona along with every state that’s more Republican-leaning in those recent polls, he would almost certainly win the presidency.

There are 18 other states where we have one or two polls, including surveys in potential battleground states that also suggest that Biden has an overall edge. Here are the states where we have at least one poll conducted since May 1, and as you can see, Biden is, somewhat surprisingly, neck and neck with Trump in Iowa and Ohio, and in a number of deep red states, Trump is actually underperforming his 2016 marks.

Trump won Ohio and Iowa by 8 and 9 points, respectively, in 2016, but recent surveys from both states show a very close race, indicative of an overall environment in which Biden is outperforming Clinton. Ohio’s polls included a high-quality early June survey from Fox News that gave Biden a 2-point lead, but it’s worth noting that Iowa’s surveys were both conducted by Democratic pollsters. Limited polling from Colorado and Virginia suggests that those traditional battlegrounds may be moving out of range for Trump — he was always likely to be an underdog in them, but Biden held double-digit leads in all three surveys from those states.

A handful of surveys from very red states found Trump well ahead, but not leading by margins in line with his 2016 performance. For instance, two Kentucky polls averaged out to a Trump lead of about 17 points, but the president carried the Bluegrass State by 30 points in 2016. This might be additional evidence that Trump is struggling nearly everywhere compared to his 2016 showing.

Lastly, a Utah poll from Y2 Analytics got some attention because it found Trump up just 3 points. Could traditionally ruby red Utah be competitive in 2020? We wouldn’t bet on it — Biden was at 41 percent in this survey, but Barack Obama’s 34 percent in 2008 is still the highest share a Democrat has won there since 1972, so this poll may represent something of a ceiling for the presumptive Democratic nominee. That said, right now the overall state-level polling picture does look really promising for Biden. 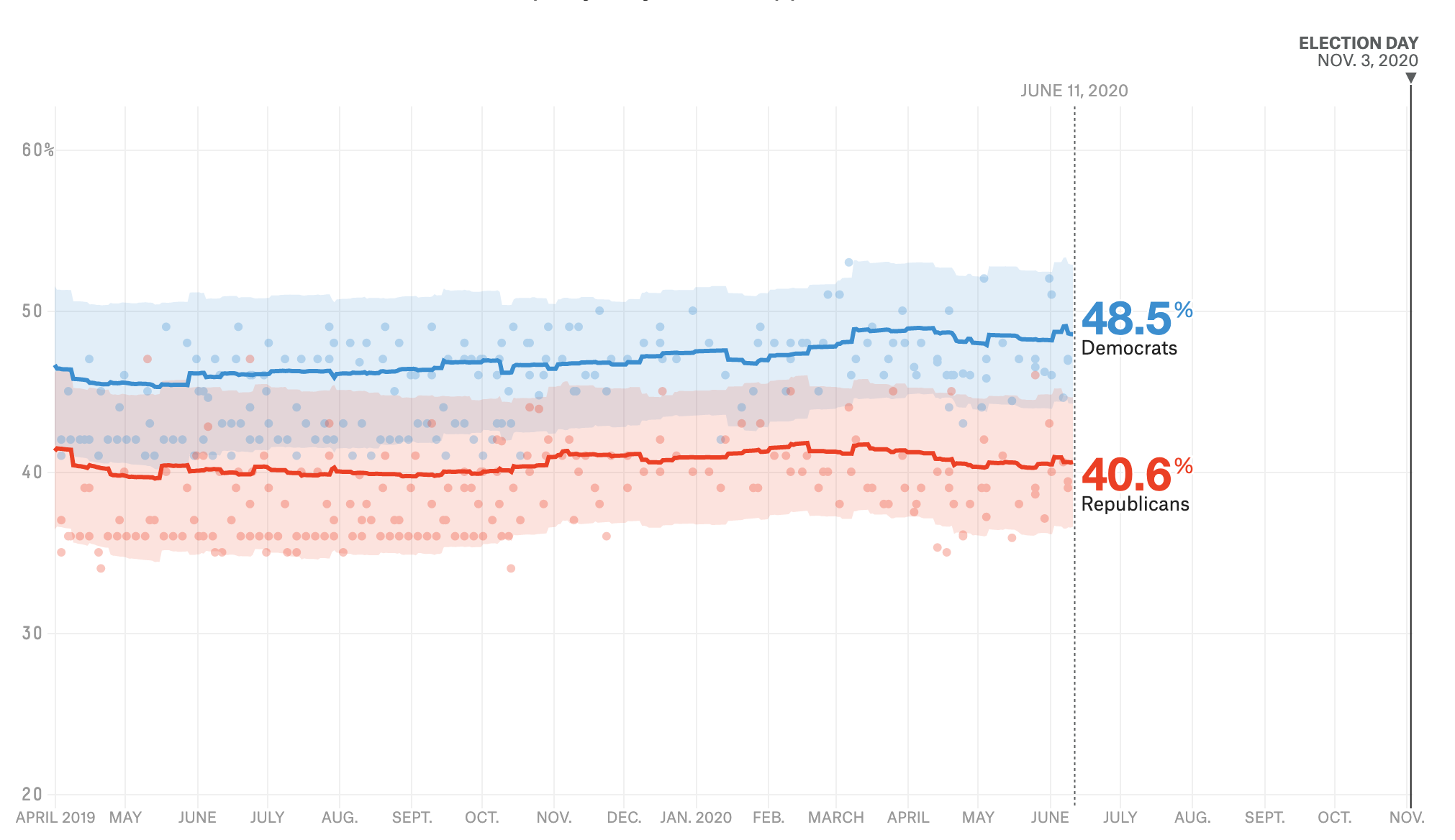