In most respects, this season’s NBA playoffs have been scintillating, with a first round for the ages, the not-so-silent protest of the Los Angeles Clippers, and the resurrection of Serge Ibaka, Oklahoma’s lord and savior. Despite all that unpredictability on and off the court, the oddsmakers in Vegas knew what was coming since nearly the first day of the regular season, or at least they saw the outlines of it. Vegas has listed the conference finalists as heavy favorites all along. The NBA is that top-heavy.

The Miami Heat, Indiana Pacers, Oklahoma City Thunder and San Antonio Spurs started the year among the top title contenders, according to online books Bovada and Sportsbook.ag. After Derrick Rose’s season-ending injury Nov. 22, while playing for the Chicago Bulls, the eventual conference finalists moved into the top four and stayed there until the start of the playoffs.

Not only did these favorites control the top spots one month into the season, they steadily increased their share of the championship odds each month, leaving the rest of the field with only a 26.2 percent chance of winning the championship by the time of the playoffs. (Because the betting odds on any sporting event always add up to more than 100 percent, I divided each team’s odds by the sum of the odds on all teams, which scaled them down to a 100 percent total.) 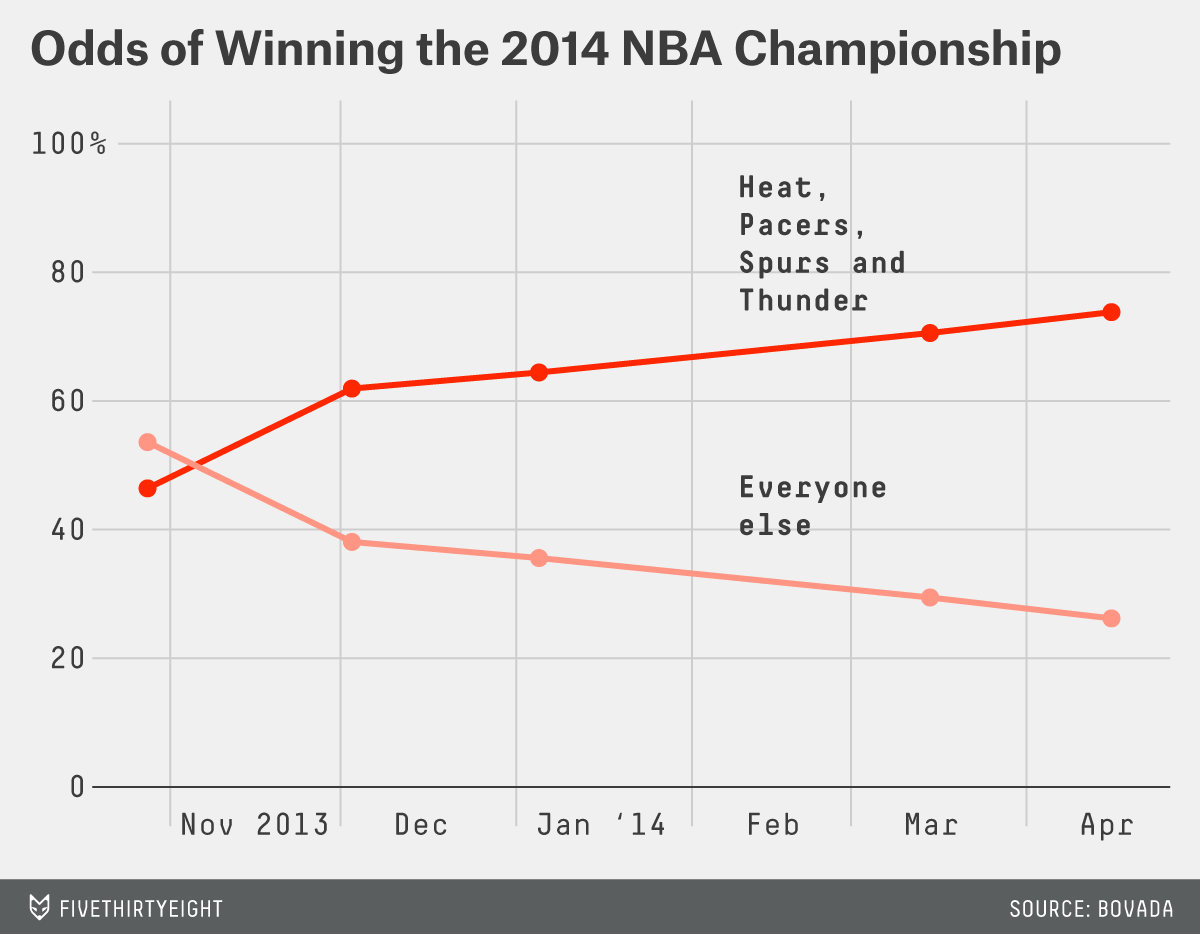 So, does the regular season matter or is it merely a de facto extension of the preseason? A few years ago, I did a study that showed the NBA has the greatest percentage of meaningless games of any of the four major North American sports. There have been quite a few arguments attempting to refute this notion — claiming that because higher seeds advance further in the playoffs, it’s important to snag a top seed — but these are only half-true. Higher seeds go further, but which team is going to finish with what range of seeds is predictable before the season starts. 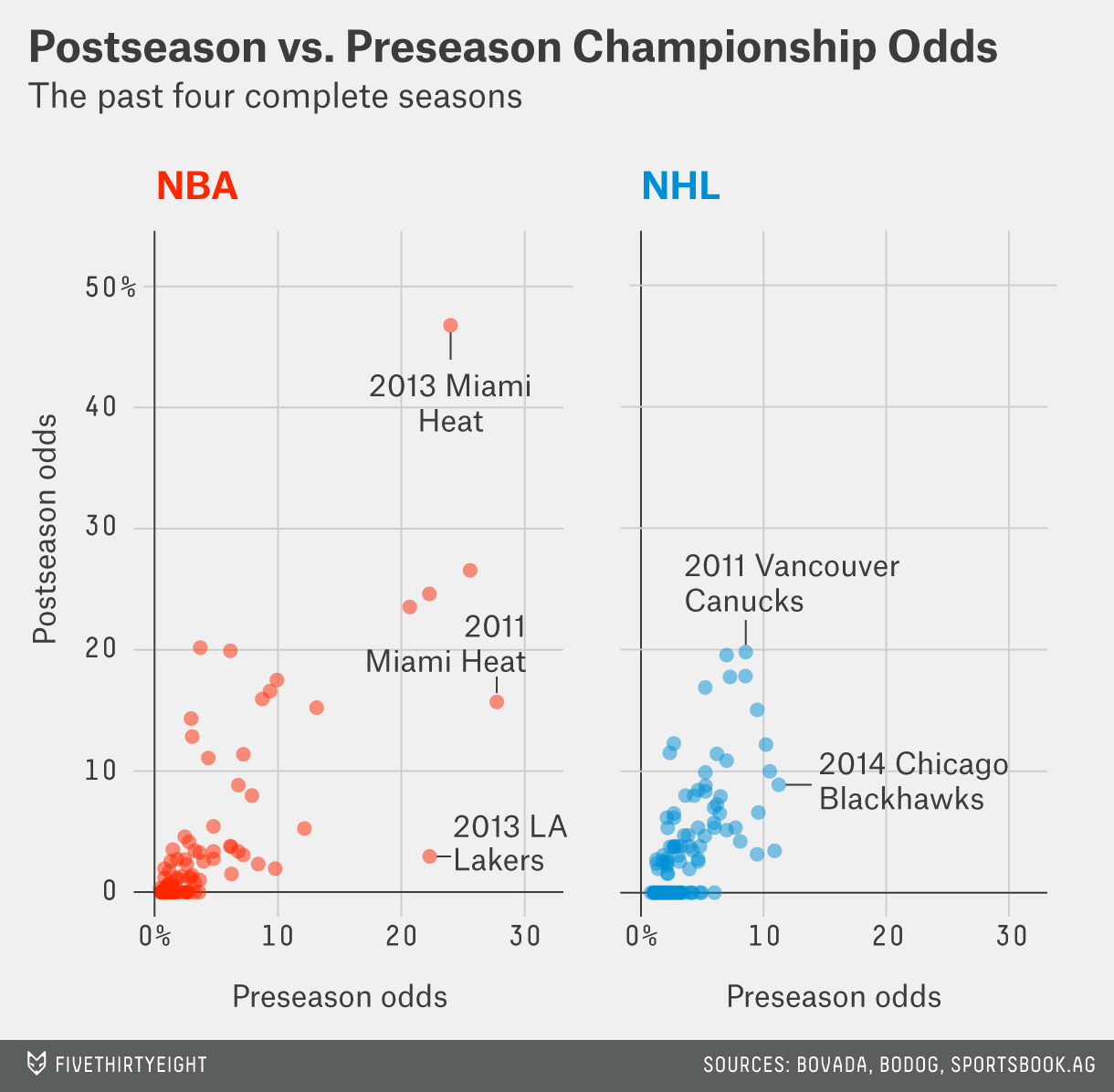 In the NBA, there’s a very strong positive correlation (.776) and few major outliers, with some of the biggest ones, the 2013 Los Angeles Lakers and 2014 Bulls, coming in large part because their best players, Kobe Bryant and Rose, suffered season-ending injuries.

Unlike the NBA, the NHL doesn’t have overwhelming favorites. The NBA had six teams with preseason championship odds greater than 20 percent over the past four years, while the NHL had only three teams over 10 percent. Also, the correlation in the NHL is less strong (.659), suggesting that hockey’s regular season is more significant in reshaping the championship picture. The NFL and MLB had preseason vs. playoff championship odds correlations of .610 and .558, respectively.

The NBA, in other words, is far more stratified. Here are the average preseason championship odds, according to betting markets, in the NBA, NFL, MLB and NBA: 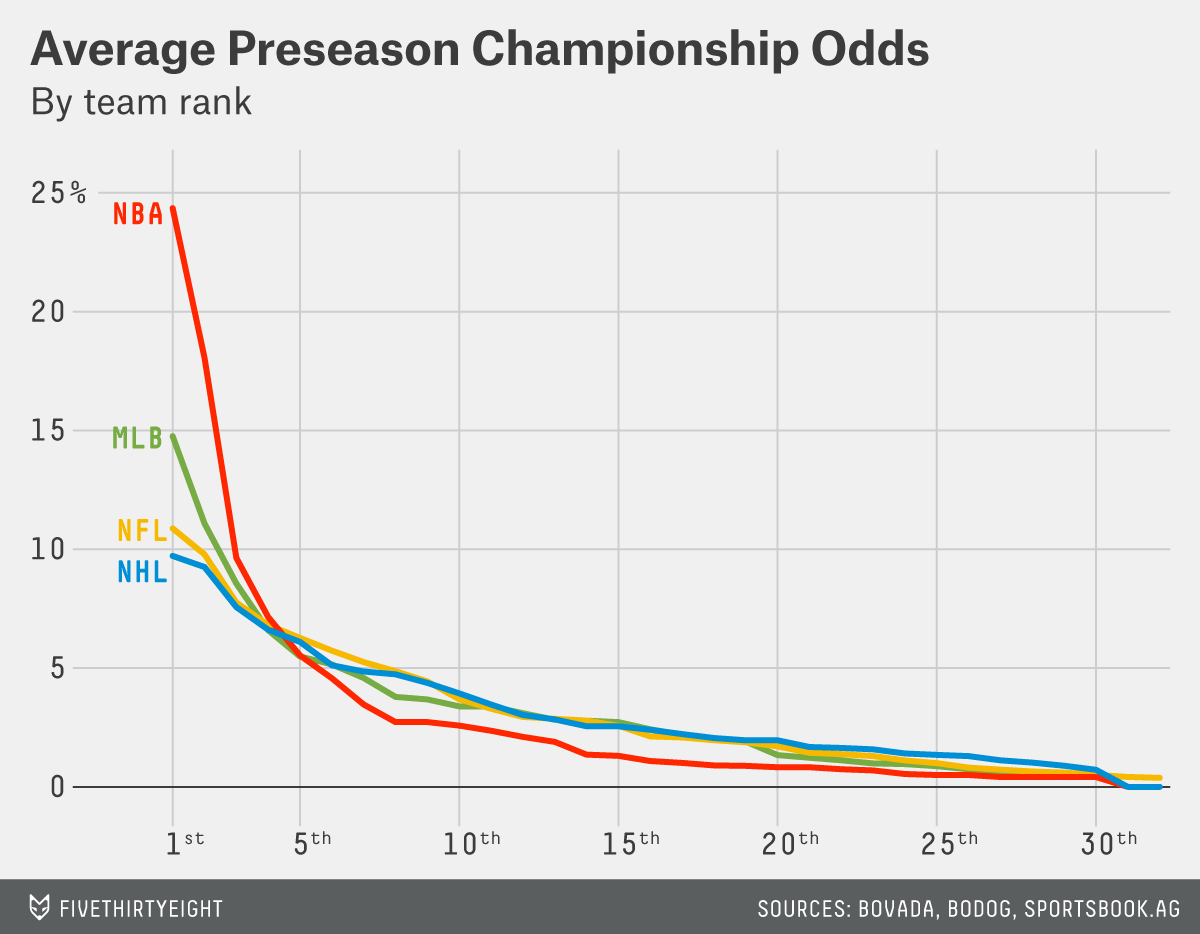 With the NBA’s top teams hoarding the bulk of the odds, its bottom 50 percent has a near-zero championship probability before a single game has been played. The Gini coefficient of the NBA — a way to measure inequality within any data set, be it a league, country, etc. — is far higher (.748) than any of the other major leagues (the next closest is the MLB with .519).

These disparities have largely played out on the court. In the past four years, no NBA team ranked lower than fifth in preseason odds has made the finals. The NHL has had only two within the top five make the finals in that time (including whichever team advances between the No. 1 Chicago Blackhawks and No. 4 Los Angeles Kings).

Despite all of this, fans of NBA teams in the bottom 50 percent buy tickets and watch games, hoping that those teams can will their way closer and closer to the Larry O’Brien trophy. The average franchise value increased 25 percent from last year, the Clippers are rumored to be fetching $2.5 billion, and a gold-mine media-rights deal is on the horizon. Sometimes, a top-heavy system doesn’t weigh down the enterprise.

Jim Pagels is an economic researcher in Washington, D.C., and regular contributor to Forbes. @jimpagels