When the Indianapolis Colts hired Chuck Pagano as head coach, he promised to “Build the Monster”: a perennially tough, hard-nosed team like the one he coached in Baltimore. Through nine games of the 2020 season, the Colts defense has allowed the fewest yards of any defense in the NFL, just the kind of Ravens-esque unit he surely hoped to build.

But Pagano didn’t build this monster. Instead, it was brought to life by his replacement, Frank Reich, and first-time NFL defensive coordinator Matt Eberflus.

Given Reich’s early successes, it might be hard to remember that he was an emergency fallback hire. Indianapolis plucked Reich from the Philadelphia Eagles just five days after Patriots offensive coordinator Josh McDaniels reneged on his agreement to take the Colts job. Remarkably, Eberflus signed his contract thinking he was going to work under McDaniels, not Reich.

Eberflus, who had been considered the Dallas Cowboys’ defensive-coordinator-in-waiting under Rod Marinelli, brought a flavor of Marinelli’s Tampa 2 scheme north with him. Indianapolis, of course, made seven straight playoff appearances and won a Super Bowl running the Tampa 2 under Marinelli’s old boss, Tony Dungy.

Converting from a Ravens-style 3-4 to a Tampa 2-based 4-3 requires extensive changes in personnel, as Eberflus admitted in a town hall meeting after his hiring. But even though Reich didn’t hire Eberflus himself, he bought into the idea.

“I’m really into pressure with four men and let the defense play,” Reich told SiriusXM at the time. “It’s a little bit of bend-but-don’t-break. It’s a unique coverage that not as many teams run, and the teams that run it don’t run it as well as the pure [Tampa 2] teams.”

Pressuring with four pass-rushers and playing well behind them is exactly what the Colts have done this year. According to Pro-Football-Reference, the Colts are pressuring opposing quarterbacks on 24.0 percent of dropbacks, ranking 12th in the NFL. Yet they’re blitzing just 19.9 percent of the time, fourth-lowest in the league. 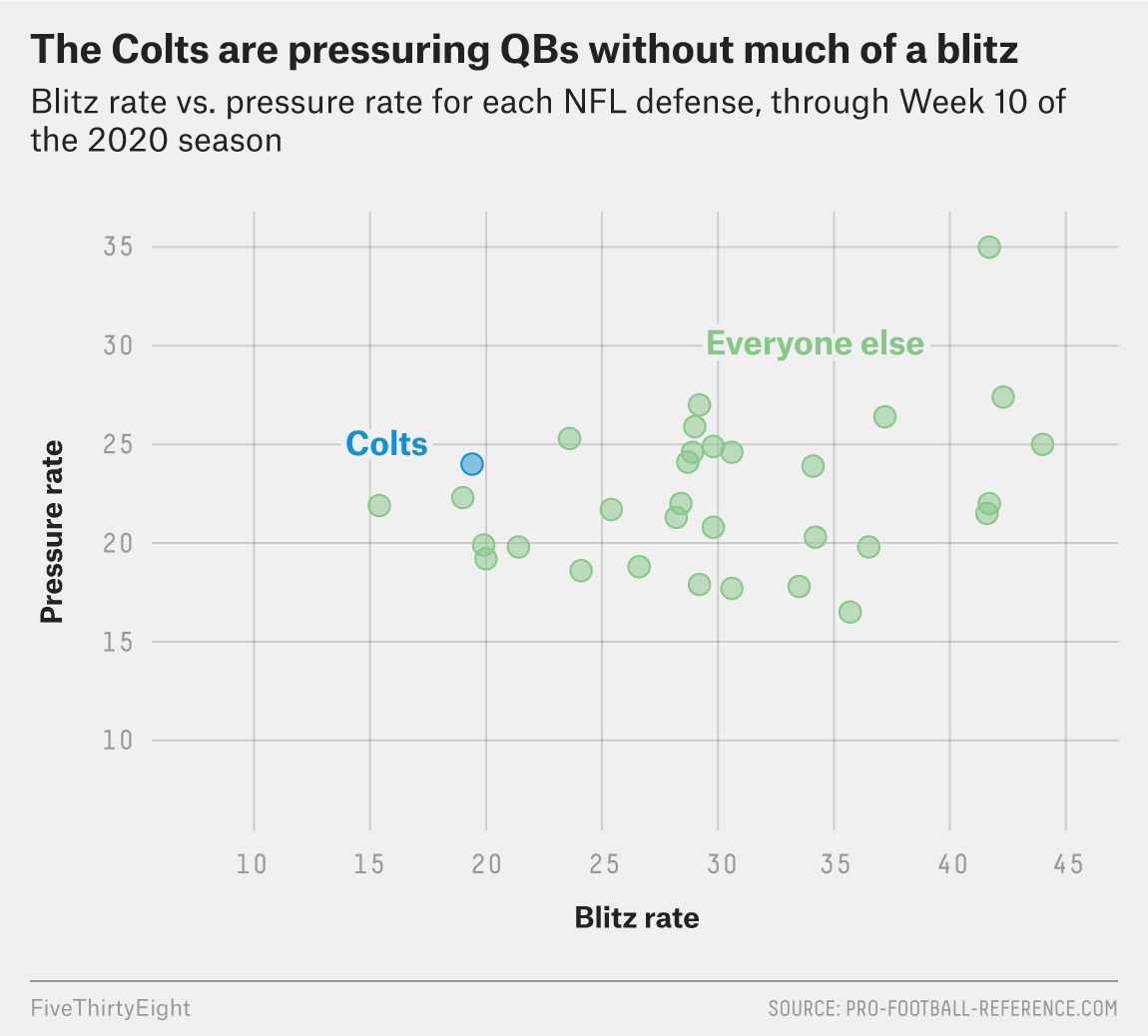 Though the Colts defense played well in the first two years under Eberflus, there’s been one big difference in 2020. Literally, a big difference: 6-foot-7, 295-pound defensive lineman DeForest Buckner.

Acquired in a surprise March trade after the San Francisco 49ers decided they couldn’t meet the young Pro Bowler’s asking price on an extension, Buckner has had a transformative impact on the Colts’ defense. His 16 quarterback hits tie him for sixth-most in the NFL, and just one behind Aaron Donald and Chris Jones for most by an interior defensive lineman. And as opposing offensive lines focus on Buckner, teammates like Denico Autry have had more room to operate; Autry has six sacks in nine games so far this year after notching just 3.5 in 14 games last season.

According to Football Outsiders’ Adjusted Line Yards stat, the Colts’ defensive line was the 15th-best against the run in 2019. This year? They’re seventh-best in that metric, and sixth-best when opponents are running up the middle — at Buckner.

The defensive line’s proficiency up front has allowed the back seven to execute their system and clamp down tight. According to ESPN Stats & Information Group, the Colts are dropping into Cover 2 more often than any team in the NFL, on 30.3 percent of pass plays.

The Colts have either intercepted or defended 21 percent of the pass attempts thrown against them — the highest coverage-play rate in the NFL so far:

Of course, there have been standout individual achievers in the back seven, too. Despite missing two games, third-year linebacker Darius Leonard has notched 60 tackles, on pace to match last season’s total — which was good enough for a Pro Bowl nod. Cornerback Xavier Rhodes is the sixth-ranked qualified cornerback on Pro Football Focus, with an opposing passer rating allowed of just 63.6 when targeted.

The Colts smothered the Tennessee Titans last week on Thursday Night Football, allowing just 294 yards of total offense on 60 Titans plays. Though 5.07 yards per play would be the fourth-best average in the league across the whole season, that actually worsened the Colts’ league-best average of yards per play allowed, raising it to a still-league-best 4.83. That’s almost a full yard less than their offense is gaining per average play (5.70).

When you’re outgaining your opponents by that much, outscoring them by 7.2 points per game and winning the turnover battle, you’re going to win a lot of football games. They’re also peaking at the perfect time: After playing the Green Bay Packers in Week 11, the Colts host the rematch against the Titans, then have three more divisional games in their remaining five.

It’s no wonder that FiveThirtyEight’s NFL model projects Indianapolis to finish this season with the sixth-best scoring differential in the NFL — and gives the team a 62 percent chance to win the AFC South.

The Colts finally have the defensive monster that Pagano envisioned. It just took Reich to build it.

Looking ahead: From a playoff-odds perspective, the biggest games of Week 11 are Philly-Cleveland and Baltimore-Tennessee. But from a pure quality standpoint, it’s tough to beat the third-most-impactful game: Arizona versus Seattle on Thursday night. Both teams have elite quarterbacks playing at a high level, with Kyler Murray of the Cardinals ranking third in expected points added (EPA) and Russell Wilson of the Seahawks ranking fourth. But the two teams are trending in opposite directions. Arizona has won four of its past five games, including a Hail Mary win over the Bills last Sunday, while Seattle has dropped three of its past four contests. Murray has a chance to feast on the Seahawks’ horrible defense (25th in EPA), though at least Seattle has home field on its side. According to our model, the winner will see its chances of winning the NFC West leap to about 55 percent, while the loser’s odds will drop to about 15 percent. So the stakes are clear, and we give the Seahawks the edge with a 58 percent chance to win. Elo’s spread: Seattle -2½