This will be pretty simple. I’m going to present to you a series of graphs showing each Republican candidate’s polling over the past six weeks. The graphs include both national polls and state polls. Some candidates perform especially well in certain states, of course, but with a couple of exceptions — like Mitt Romney in New Hampshire — the differences aren’t large, and in my view the trade-off is worth it since it significantly increases the sample size. Besides, most of the state polls are from places like Iowa, New Hampshire and Florida, which — last I checked — are pretty important to the nomination process. 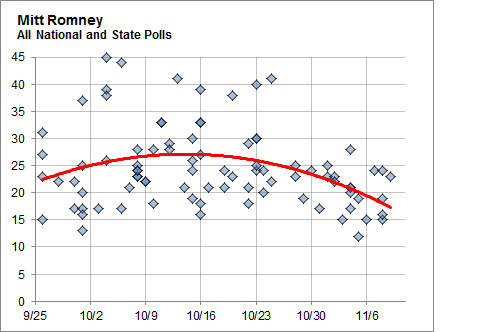 Mr. Romney’s polls seem to be bending down a bit. Over the past week or two, we’ve seen a larger number of polls, both at the state and national level, that show him below rather than above 20 percent; the trend line from our graph, in fact, now has him at only about 18 percent overall. Considering that other Republicans have had their problems during this time period, I would call this trend at least mildly worrying for Mr. Romney’s campaign. I certainly consider Mr. Romney the clear favorite to win the Republican nomination, but these numbers do not exactly suggest that there is anything inevitable about it. 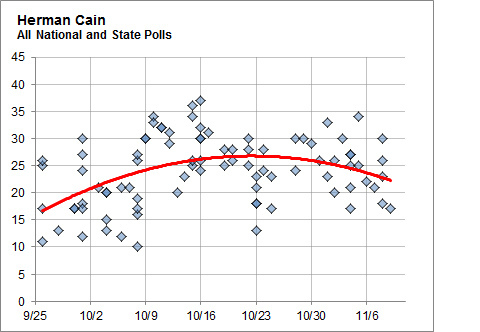 Herman Cain’s numbers have probably also been moving down slightly. After peaking at about 27 percent two or three weeks ago, the trend line now shows him at 23 percent. Still, we’re seeing quite a lot of variance from survey to survey for Mr. Cain — and it goes without saying that his numbers are likely to be volatile as voters sort out what they think about the sexual harassment allegations against him. 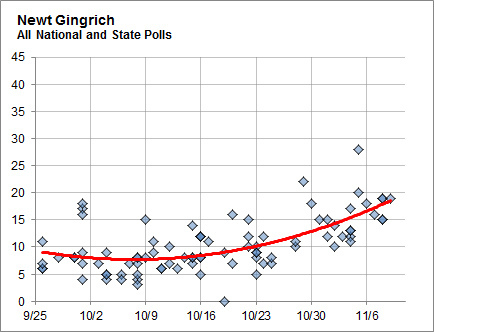 If Mr. Romney and Mr. Cain are on a somewhat downward trajectory, you’d expect to see another candidate gaining ground. And that candidate is, indeed, Newt Gingrich. He’s polling in the mid- to high teens in most recent surveys, with occasional forays into the 20s. Also, for whatever reason, his state-by-state polls have generally been better than his national polls, so if anything the national surveys may somewhat understate his momentum. This method now shows him at about 18 or 19 percent of the vote, meaning that he’s roughly tied with Mitt Romney. 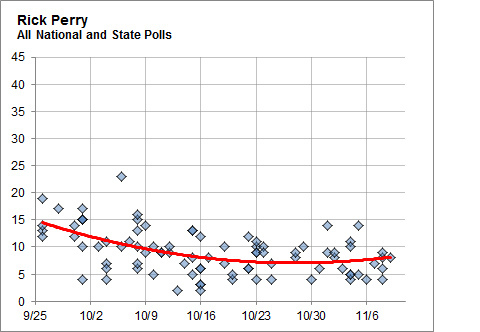 Rick Perry had seemed to have halted his decline in the polls as of a few weeks ago, as he’s been polling fairly consistently in the high single digits in both state and national polls recently. Very little of this polling, however, has been conducted since Mr. Perry’s stumble in the debate on Wednesday night. In a week or so, we should have a better sense of how much it harmed him. 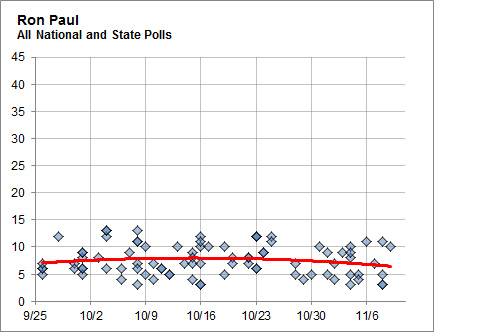 The polling for the remaining Republican candidates is mostly uninteresting. That includes Ron Paul, whose numbers always seem to gravitate toward the high single digits or very low double digits almost no matter when the poll is conducted or which state it is in. 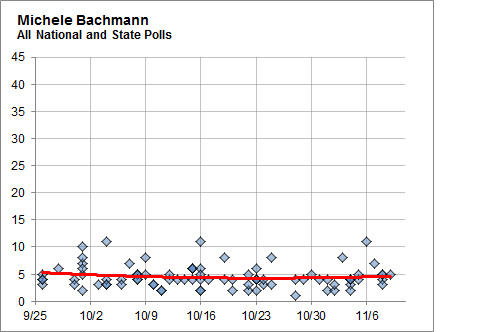 There’s no sign of life, meanwhile, for Michele Bachmann, who is stuck at about 5 percent in the polls. 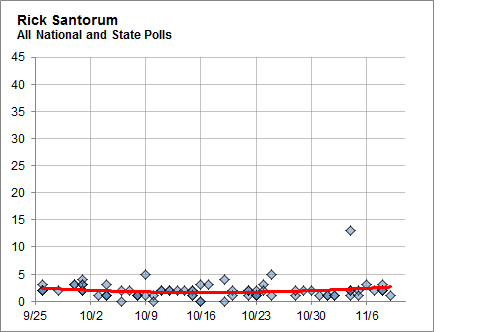 Nor is there any momentum for Rick Santorum, who almost always polls at between zero and 5 percent, with the exception of one poll in his home state, Pennsylvania, where he did fairly well. 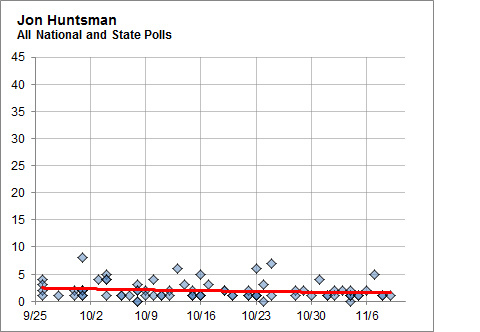 Jon M. Huntsman Jr. has also shown no improvement in his national polls, although he is usually polling in the high single digits in New Hampshire, where he has concentrated most of his resources.

But the biggest piece of news here is Mr. Gingrich and his rise in the polls: he, Mr. Romney and Mr. Cain may now be in a rough three-way tie for the Republican polling lead. Polls certainly aren’t everything in a presidential primary, and for reasons I outlined earlier this week, Mr. Gingrich might have trouble maintaining his momentum as his campaign begins to receive more scrutiny. Still, it looks as if he’s going to enjoy his moment in the sun.