The 41,911 fans who filed into AT&T Park on June 8 got lucky. It was a perfect, 74-degree Sunday afternoon (instead of the notoriously fickle San Francisco weather), and the sky was filled with glorious sunshine. Those in attendance got a taste of baseball glory, too. The Giants beat the Mets 6-4 that day, making it five wins in a row for Los Gigantes. With that win, they improved to 42-21. A year after stumbling to a 76-86 record, the Giants owned the best record in baseball.

They’ve been terrible ever since. San Francisco has lost 16 of its last 21 games, the worst record for any major league team during that time. After owning a 9.5-game lead in the NL West on June 8, the Giants have given most of it up, clinging to a half-game lead on the Dodgers. You can find all kinds of reasons for that swoon. Injuries forced journeyman Tyler Colvin and light-hitting rookie Joe Panik to take on regular playing time, with predictably bad results. Mike Morse, an early-season terror at the plate, hasn’t hit a lick for the past month. And closer Sergio Romo turned into a piñata, becoming former closer Sergio Romo in the process.

Few could have predicted such a sharp and sudden drop. But one indicator did suggest that regression was coming, sooner or later: cluster luck.

In a late-May Grantland column, I wrote about the concept of cluster luck as a way to explain how a series of good (or bad) events coming one after another can propel or punish a team:

Joe Peta, a former Wall Street trader, presented cluster luck in his book, Trading Bases. Essentially, the concept boils down to this: When a team’s batters cluster hits together to score more runs and a team’s pitchers spread hits apart to allow fewer runs, that’s cluster luck. Say a team tallies nine singles in one game. If all of those singles occur in the same inning, the team would likely score seven runs; if each single occurs in a different inning, however, it’d likely mean a shutout.

You’ll sometimes hear a broadcaster talk about a team that scores in bunches, or a pitcher who knows how to scatter hits. But those streaks don’t tend to last very long, since these aren’t sustainable skills for most teams, or players. So when a team has high cluster luck numbers, it usually means its luck isn’t going to last long. Losses are likely around the corner.

Sports analyst Ed Feng, proprietor of ThePowerRank.com, calculates cluster luck by using the Base Runs formula to compare actual runs scored and runs allowed to expected runs scored and runs allowed. When that Grantland article ran just over a month ago, Feng had found that the 32-19 Giants ranked second in the majors in cluster luck. And while Giants hitters had bunched hits together about as well as an average team’s hitters would, their pitchers had been astoundingly fortunate, giving up 22 fewer runs than you’d expect over their first 51 games.1

On Wednesday, Feng updated his cluster luck rankings. Below is the ranking of the 30 teams from luckiest to unluckiest: 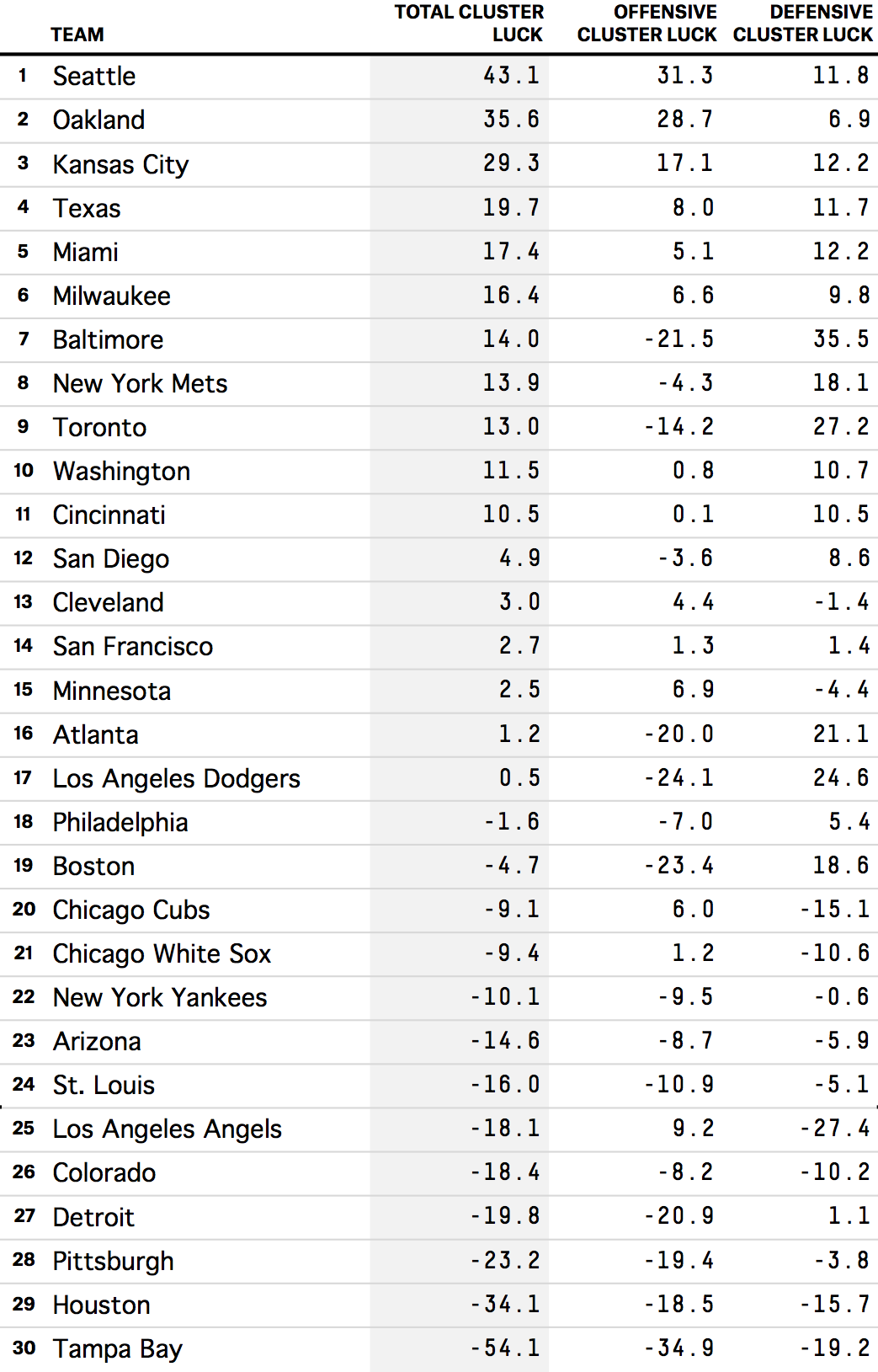 Whatever luck the Giants had earlier in the season, these latest numbers show that their good fortune has almost completely evaporated. A lot of that pullback falls on Romo. From May 29 to June 28, the team’s erstwhile closer allowed 12 hits in nine and two-thirds innings — subpar numbers for a closer, but not necessarily fatal ones, assuming those hits were spread out. They were not. Romo worked four straight perfect innings from June 4 through June 12, with all 12 of those hits coming in just six appearances. All told, opponents blasted him for 10 runs in those six appearances, netting a 16.88 ERA. The biggest beating came on June 13, when the Colorado Rockies clobbered him for four hits, drew a walk and tallied five runs in just one-third of an inning.2

The Giants are a talented team, and it wouldn’t be surprising to see them contend for the NL West title, and maybe even make a run at the World Series. They have a young ace in Madison Bumgarner, Tim Hudson enjoying a late-career revival, Tim Lincecum suddenly pitching masterfully, All-Stars Buster Posey and Pablo Sandoval heating up after lousy starts, excellent first baseman Brandon Belt due back soon after a long stint on the disabled list, and a general manager who’s made lots of aggressive trades in his 18 years at the helm. The cluster luck regression has come, yet they’re still hanging onto first place.

We could see more teams experience cluster luck pullbacks, starting with Seattle. The Mariners boast plenty of front-line talent themselves, with Felix Hernandez and Hisashi Iwakuma at the top of the rotation. Robinson Cano is performing about as well as a guy with six home runs can, and 23-year-old Mike Zunino is emerging as a top defensive catcher and dangerous power hitter. Underrated third baseman Kyle Seager is putting up career-best numbers, and the bullpen is leading the American League both in ERA and in fielding-independent metrics. This is also a team with lots of holes, one that has 36-year-old banjo hitter Endy Chavez leading off every day, to name only the most glaring problem. Yet the Mariners are on fire, having won four in a row, 10 of their last 12, and 27 of their last 43 games. 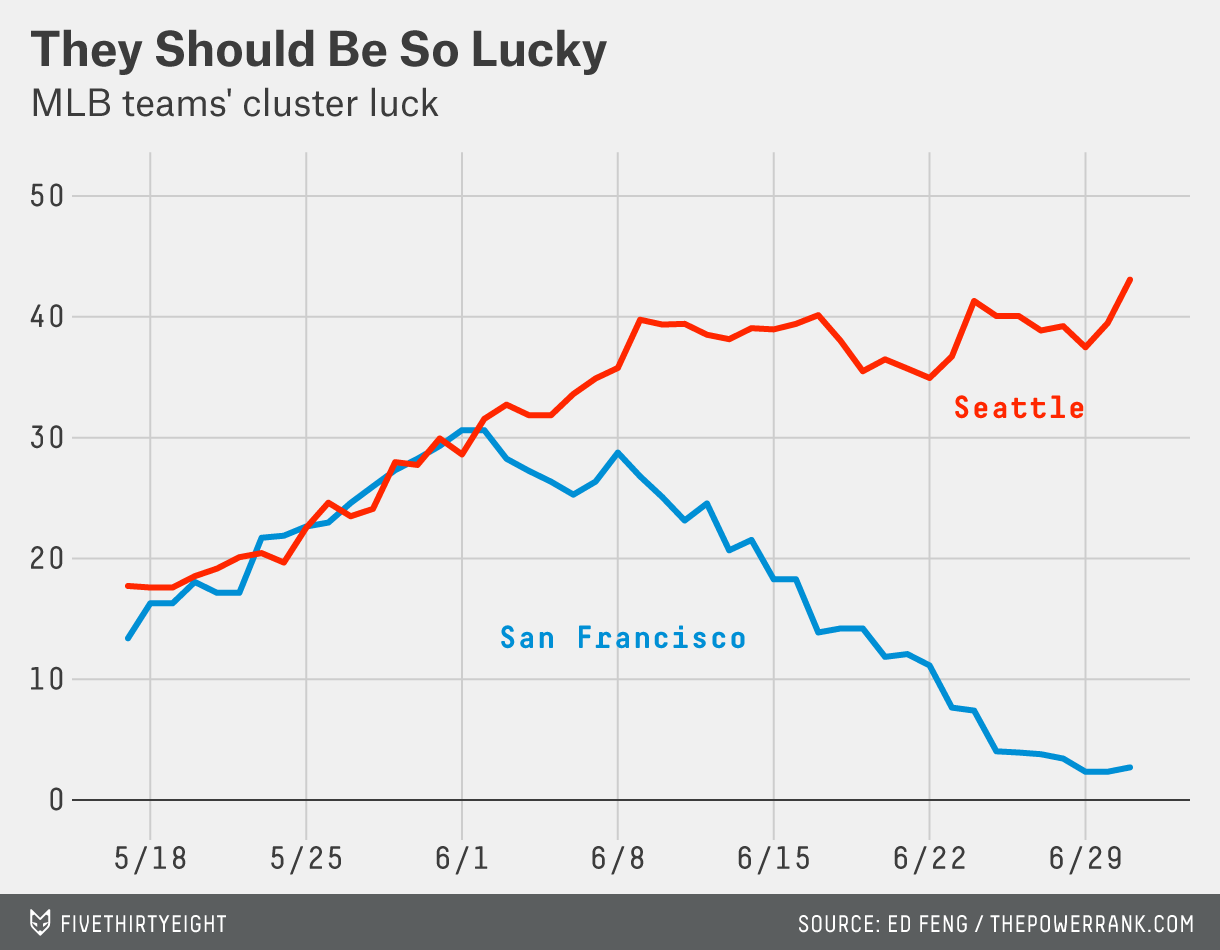 That’s what happens when your hitters bunch together hits better than any other team. Through Tuesday, the Mariners had scored 31 more runs than you’d expect from a club with average hit distribution. That Tuesday game offered a Ph.D.-level course in what happens when your hitters click at the same time. Coming into the sixth inning, Seattle clung to a narrow 3-1 lead. The first two batters of the inning reached on a walk and an infield single, followed by two straight groundouts by the lineup’s 1-2 hitters. Then, an outburst. Cano doubled. Seager doubled. Logan Morrison doubled. Zunino doubled. Michael Saunders singled. Finally, Ackley capped the monster inning with a sixth straight Mariners hit, this one an RBI single. All told, Seattle scored seven runs on seven hits in the sixth, an incredibly tough feat to pull off without the benefit of a single homer.

None of this is meant to suggest that the Mariners will fall into an immediate slump, the way the Giants did.3 They have the best pitcher in the American League, and a supporting cast that’s getting increasing contributions from younger players. After sweeping the lowly Astros, they now play seven straight against the struggling White Sox and Twins. And they recently called up top pitching prospect Taijuan Walker from the minors, a far better fifth starter than Erasmo Ramirez, Brandon Maurer or others Seattle might have considered.

Still, the Ms probably shouldn’t settle for the roster they have now. They already opened the vault for Robinson Cano last winter, and they’ve got the ample TV revenue they’ll need to go after other big talents. The cluster luck beast is lurking in the shadows, and the trade deadline is coming up. Might as well try to fight back.