Having essentially secured the Republican nomination, Mitt Romney now faces a general election to-do list. He must try to repair his favorability ratings among independent voters, which were eroded by a bruising primary campaign. He must try to close a gender gap that shows women supporting President Obama by a wide margin.

But more fundamentally, Mr. Romney must begin the nuts-and-bolts work of setting up a general-election campaign. In crucial battleground states, the Romney camp must hire staff and open field offices, woo volunteers and knock on doors.

By contrast, the Obama campaign has been laying the groundwork for the general election for some time. Although Mr. Romney has the time and resources to catch up, the president has already plowed millions of dollars into the beginnings of a ground game that stretches from battleground Ohio to long-shot Arizona to safely-Republican Wyoming.

Caveats aside, Mr. Obama has a substantial head start in organizing a general election get-out-the-vote operation, particularly in the number of field offices he has established. 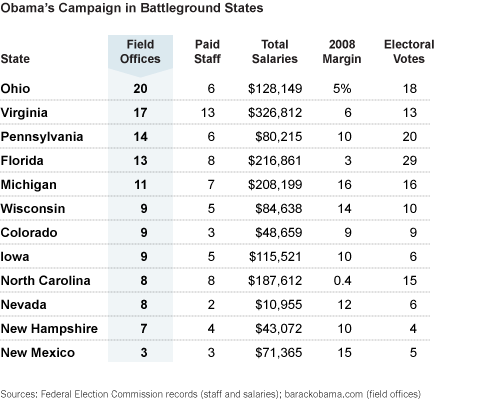 The extent to which Mr. Romney can match the Obama campaign’s footprint in swing states may prove critical in deciding the election. A campaign’s ground game is hardly the sole determinant in an election, but it can be decisive in a close contest.

Field offices serve as a base for the most effective get-out-the-vote tactics, like door-to-door canvassing. In fact, in 2008, the Obama campaign’s wide web of field offices, and the advantages those offices gave Mr. Obama over Mr. McCain, helped flip three states to Democratic from Republican, according to a study by Seth E. Masket, an assistant professor with the Department of Political Science at the University of Denver.

Mr. Obama has at least two paid staffers in all 12 battleground states (the paid staff and salary figures are based on the recipient’s state of residency in the F.E.C. filings. The figures do not include volunteers and are updated through the most recent F.E.C. filing, Feb. 29).

Nationally, Mr. Obama has spent $13.4 million on direct salary payments. About 59 percent of that was for workers based in Illinois, where the president’s re-election team is headquartered. The Romney campaign, which is based in Boston, has spent $4.1 million in salaries for campaign workers in Massachusetts (although, for both campaigns, salaried employees can travel to other states). Mr. Romney also spent about $813,000 for temporary workers in primary states.

Mr. Romney is not starting entirely from scratch. The infrastructure the campaign set up for primaries, in states like Florida and Ohio, was mostly — though not completely — temporary.

Nine of the swing states listed above held primaries during the competitive phase of the Republican primary, and the Romney campaign should be able to build off its efforts in those states. “We’re working now to expand on the strong foundation that we laid during the primary process,” Ryan Williams, a spokesman for Mr. Romney said.

Mr. Romney has many months to build that operation. In addition, once he is he official nominee, Mr. Romney will inherit the infrastructure being built by the Republican National Committee.

A national campaign’s localized outreach — field offices, staff and volunteers — helps a candidate contact voters in a more personal manner. Potential voters have been shown to be more receptive when contacted by someone in their community rather than by a television commercial or automated phone call.

In 2008, about a fourth of all voters were contacted in some way by the Obama campaign. Mr. McCain’s campaign contacted 18 percent of general-election voters. A FiveThirtyEight study from just after the 2008 election found that “each marginal 10-point advantage in contact rate translated into a marginal 3-point gain in the popular vote in that state.”

In 2008, Mr. Obama did not exactly need those few percentage points. But by many early measures, the 2012 election between Mr. Obama and Mr. Romney is shaping up as a much closer race than the 2008 contest, and a couple percentage points won by the hard work of local get-out-the-vote operations could make the difference. Mr. Obama has an early, but by no means insurmountable, lead in building such an apparatus.