On Sunday night, the fourth season of HBO’s “Game of Thrones” wrapped up. The season was primarily based on the second half of “A Storm of Swords,” the third book in George R. R. Martin’s “A Song of Ice and Fire” series. HBO has renewed the drama for fifth and sixth seasons, and producers said they will cap off the drama at seven seasons. The fifth season will draw material from the fourth and fifth books, which largely take place concurrently, and the sixth season will draw material from the sixth book.

But the sixth book isn’t exactly written at the moment.

In an article published Monday, I looked at the pseudo-scientific process by which Martin’s fans have tried to predict the publication date of that sixth installment, “The Winds of Winter.” I also tried a data-driven approach to forecasting the release. The findings were mixed, however, and there’s a larger question that’s easier to solve: Will the TV show eclipse the books?

The showrunners know how Martin will end the series, so they can write that ending should they outpace him. “Game of Thrones” has, for the past four years, premiered in late March or early April, so we’d expect that Seasons 5, 6 and 7 to begin in March or April of 2015, 2016 and 2017, respectively.

Barring a comet collision (or a white walker invasion), we can probably expect “The Winds of Winter” book to be out by March 2016. But then, in the subsequent year, HBO will (probably) release its final “Game of Thrones” season based on the last book, “A Dream of Spring,” which Martin will presumably write after he finishes the sixth book. 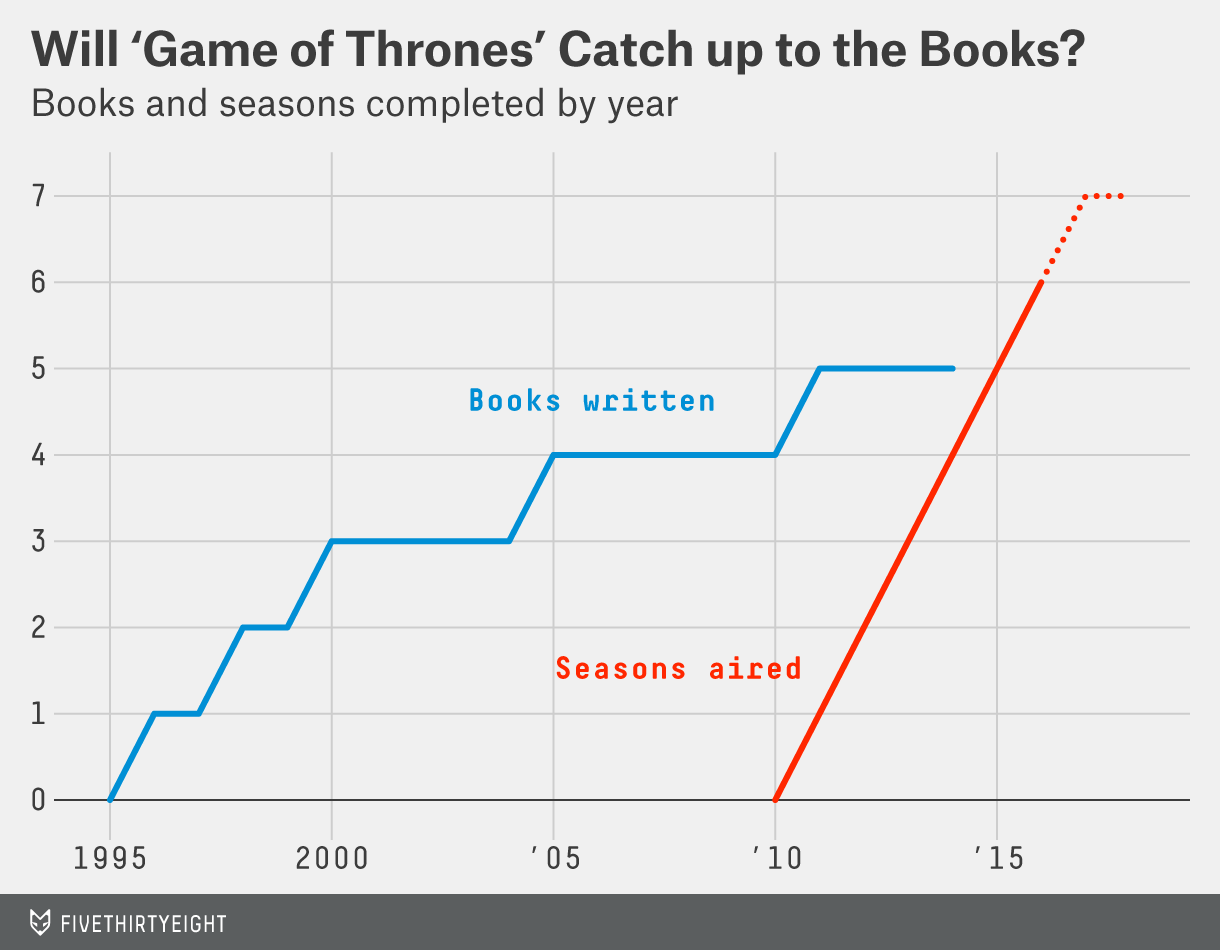 We can describe Martin’s writing pace using a metric I call “final written words per day.” It’s a simplistic-but-solid stand-in for aggregate productivity, and it’s an ideal way to compare his writing rate between books. We divide the word count of each book by the number of days between its publication date and the preceding book’s publication date. For “A Game of Thrones,” Martin’s first book, we use January 1991 — the start of the year in which Martin began working on the series.

Based on the publication date of the fifth book, “A Dance With Dragons,” we know Martin is writing at a rate slower than 400 words per day. This is fine for “The Winds of Winter”; he could write as slowly as 240 words per day and release the book by the end of 2015, ahead of the corresponding TV season. But that would almost assuredly mean that the last book would come out after the final season, and that would be bittersweet for fans.

Let’s say “The Winds of Winter” were to come out as early as July; it probably won’t, because there was a three-month lead time between the completion of “A Dance With Dragons” and its publication. (For a look at using Martin’s writing rate to anticipate a “Winds of Winter” release, check out Christopher Ingram’s piece on Wonkblog.) Let’s also assume that “A Dream of Spring” is about the same length as the anticipated length of “The Winds of Winter” — about 400,000 words.

Martin would have to write “A Dream of Spring” at a breakneck rate of 401 final words per day, which is slightly faster than he wrote “A Clash of Kings” and much faster than he is writing “The Winds of Winter,” based on our estimates.

Of course, it’s possible that Martin will quicken his pace as HBO gains on him. But our estimate of a July release date for “The Winds of Winter” would mean his rate was 356 words per day, so he’d have to speed it up. It might be a difficult target to hit.

“Game of Thrones” fans should brace themselves for the possibility they will learn how their favorite book series ends on TV.