Last week’s passage of a bill to make New York’s marriage law gender-neutral may accelerate efforts to put the issue before voters in other states.

A measure to ban same-sex marriage in Minnesota’s Constitution is already scheduled to be on the ballot in 2012, and one could follow in North Carolina. But with relatively few states now holding neutral positions on same-sex marriage, there may be efforts to repeal constitutional bans that already exist, such as in California and Oregon.

It is high time, therefore, to revisit the model that I originally built in 2009, which aims to predict the percentage of the vote that gay marriage-related ballot initiatives will receive.

When we last discussed this model, it gave Maine’s Question 1 — which reversed the State Legislature’s decision to provide for same-sex marriage — a 3-in-4 chance of being defeated. In fact, the measure won and same-sex marriage was repealed in Maine, although the results were close and within the model’s margin of error. (There’s more discussion of the Maine result here.)

In addition to inserting the data point from Maine, I’ve included a couple of other measures this time around: first, the liberal-conservative orientation of the state, as determined by responses of individual voters to the 2008 National Annenberg Election Survey, and second, the median age of an adult in the state, based on data from the Census Bureau. (The latter variable technically falls just short of being statistically significant as a predictor of marriage votes but since the relationship between age and views on same-sex marriage is extremely well established, we are on firm ground in including it.)

Two variables from the original model — the religiosity of the state, and an indicator of whether the measure singled out just marriage or also civil unions — have been retained. I also include a variable for the time trend. But — another new wrinkle — there are two different versions of it. In one version, the Linear Model, we assume that the increase in support for same-sex marriage is linear (i.e. that it is increasing at about the same rate every year), as per the original model. The second version, the Accelerated Model, instead uses the trend line from national polls on same-sex marriage.

Although the two models produce nearly identical estimates on the historical data, they diverge somewhat in their forecasts because same-sex marriage appears to have gained support at a faster rate in the last couple of years. The Accelerated Model assumes that polls showing national support for same-sex marriage, which average about 50 percent now, will reach 52 percent by November 2012 — while the Linear Model assumes that position will still be in the minority.

The data for both models consist of the results of 34 ballot initiatives to limit same-sex marriage rights, all but one of which, Arizona Proposition 107, were approved. (I do not use the two cases — in Colorado in 2006 and in Washington in 2009 — in which measures were on the ballot to expand rights for gay and lesbian couples in the form of domestic partnership laws.) The model does not use any polling data, other than to calibrate the time trend in the Accelerated Model.

Projections for all 50 states and the District of Columbia are below, as applied to hypothetical ballot measures that would be voted upon in November 2012. The figures reflect the share of voters that would be expected to approve the measure — that is, to prohibit same-sex marriage. 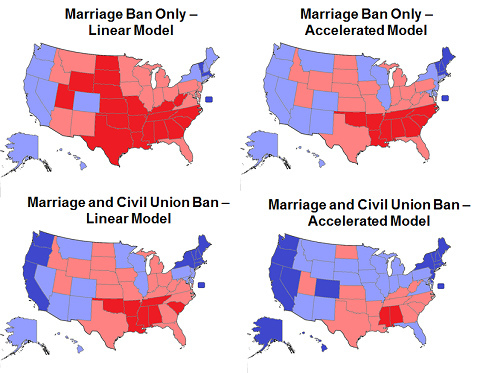 As you can see, there are four different versions of the numbers for each state: the Linear Model and the Accelerated Model respectively, as applied to initiatives that either would or wouldn’t ban civil unions in addition to gay marriage. The vote shares projected by the Linear Model generally run about five percentage points ahead of those projected by the Accelerated Model. What that means, in essence, is that within the last couple of years, opposition to same-sex marriage has declined by about 5 points more than would be expected based on the longer-term trend. Also, measures that seek to ban civil unions in addition to marriage perform about seven points worse at the voting booth than those that single out marriage alone.

These are, needless to say, meaningful distinctions. The most generous set of assumptions for gay rights advocates are that the ballot initiatives would seek to ban civil unions in addition to same-sex marriage, and that the Accelerated Model most accurately reflects current sentiment about marriage. Under these assumptions, all but 15 states would be projected to reject such a ballot initiative if one were on the ticket next year.

The most restrictive assumptions, by contrast, are that the ballot initiatives would single out marriage only, and that the Linear Model is correct. Under these rules, all but 14 states (and the District of Columbia) would be projected to find a majority for a ban on same-sex marriage.

In addition, there is the margin of error to consider. When applied to the historical data, the model’s margin of error is roughly plus or minus eight percentage points — a reasonably wide interval — and for a variety of theoretical and practical reasons, that may somewhat underestimate the error when the model tasked with making projections about new cases. Perhaps only when the model projects a vote share of over 60 percent or under 40 percent would I consider the forecasts truly “safe,” given the idiosyncrasies from state to state. Also note that it is not necessarily the case that a ballot measure needs a simple majority to take effect — many states have quirky rules.

The most basic conclusion is simply that a lot of states should be considered “swing states” on the question of same-sex marriage right now. But let’s get into a few more specifics.

Minnesota. The Minnesota measure, which would ban same-sex marriage but not domestic partnerships, should be considered something of a tossup. Under the Accelerated Model, it would fail with about 49 percent of the vote, while under the Linear Model it would pass with 54 percent — both forecasts well within the models’ respective margins of error.

One additional factor, however, is that Minnesota rules require a majority of all voters to cast a ballot in favor of a constitutional amendment in order for it to pass. So someone who turns out to vote next November and punches her ballot only for the presidential election is essentially a “no” vote. Historically, about 5 percent of Minnesota voters undervote constitutional amendment proposals despite casting ballots for other races, so what this means is that the ban on same-sex marriage will de facto need something like 52 percent of the vote in order to pass. For this reason, I’d conclude that the Minnesota measure is a slight underdog.

In addition, the most recent poll in the state finds that 55 percent of voters oppose the ban on same-sex marriage while 39 percent support it. Polls on this issue have historically underestimated the support for bans on same-sex marriage — but not by such a wide margin to account for this discrepancy. Instead, the rule of thumb is that you should assume that all undecided voters will vote for the marriage ban. But since an outright majority of Minnesotans oppose the initiative in the poll — even after accounting for the undecided — it provides some meaningful guidance.

The ban is certainly not a heavy favorite to be defeated: see this blog post for someone who thinks it will pass, and consider that there are two plausible Republican presidential nominees from Minnesota, which could affect the dynamics of the vote. But I’d set something like 5-to-3 odds against its passage.

The proposed text of the amendment would seem to apply to domestic partnerships in addition to marriage, however, which makes its prospects more tenuous. We’d project such a measure to receive about 60 percent of the vote under the Linear Model, but 54 percent under the Accelerated Model, making it a favorite but not a prohibitive one.

New York. New York’s new law is unlikely to be overturned. If a constitutional amendment to ban same-sex marriage were on the ballot next year, we’d project it to receive 40 percent of the vote under the Accelerated Model or 44 percent under the Linear Model, making its passage doubtful but not impossible.

But New York law is quite unfriendly to constitutional amendments, and even groups that would like see the law overturned are unlikely to get a proposition on the ballot before November 2015. Unless the trend toward greater acceptance of same-sex marriage abruptly reverses itself, such a measure would probably be defeated, perhaps by a wide margin.

Iowa. Among the six states where same-sex marriage is allowed today, Iowa is the only one in which the model projects a majority of voters would want to overturn it — either 52 or 58 percent of voters, depending on which model is used.

But Iowa is another state in which the constitutional amendment process is cumbersome. Ballot initiatives must be approved by both chambers of the Legislature for two consecutive sessions, and with Democrats having held onto control of the State Senate, it is likely to be at least 2013 before the initiative passes through the Legislature the first time, let alone the second.

If and when an amendment eventually makes the ballot, Iowans will have lived with same-sex marriage for several years at a minimum, during which time support for marriage equality is likely to increase both within the state and nationally. Therefore, the law is relatively likely to stick, the more promising route for overturning it perhaps being a court challenge.

New Hampshire. New Hampshire is another state in which there are discussions about overturning the new marriage law. Public opinion, however, is more likely than not to resist to such measures. Although the state can be fiscally conservative, it is also highly secular, and the models would project around 60 percent of the voters there to reject a ban on same-sex marriage if one were voted upon next year.

Maine. With the important caveat that the model had incorrectly deemed Question 1 to be an underdog in 2009, the results might be different if a similar measure were voted upon again. Between the growth in support for same-sex marriage over the past three years and the fact that the ballot initiative in 2009 may have benefited from standing alone on the ballot rather than being coupled with other races, the model thinks Mainers are likely, although not certain, to affirm same-sex marriage if given another chance.

However, there is not yet a precedent for overturning a constitutional amendment that the voters in a state had previously approved, and the model might or might not be reliable in such cases.

Nevertheless, even the relatively cautious Linear Model predicts that 54 percent of Californians would vote against a measure like Proposition 8 if one were on the ballot next year, while 55 percent of Oregonians would vote against a ban on same-sex marriage like the one the state’s voters approved in 2004. Neither prediction seems too far out of line: Oregon’s marriage ban was rejected by 43 percent of voters seven years ago, and California’s by 48 percent two years ago, and public opinion has shifted meaningfully in favor of same-sex marriage since then.

In short, the future for same-sex marriage looks to be reasonably bright. Most of the states that were fertile ground for passing a constitutional ban on it did so long ago. Minnesota and North Carolina are potential exceptions, but the six states that have gender-neutral marriage laws on the books now are unlikely to see them reversed, while some of those that don’t are in a position for gay rights advocates to go on offense.