Scarlett Johansson is the most bankable actress — and the second-most-bankable woman, after only the head of Lucasfilm — in all of Hollywood. That means she adds box-office value like no other, and with “Ghost In The Shell” out this weekend, she’s poised to yet again lead a science-fiction film to box-office glory.

But how she got here — from a start as a child star in the ’90s to a perfectly threaded needle into adult roles and now, finally, as the anchor and, I’d argue, central protagonist of the most successful franchise of all time — is a story unto itself. As I’ve done before, I plotted her films’ inflation-adjusted domestic box office revenue according to The Numbers against their critic score on Rotten Tomatoes to make sense of her career. 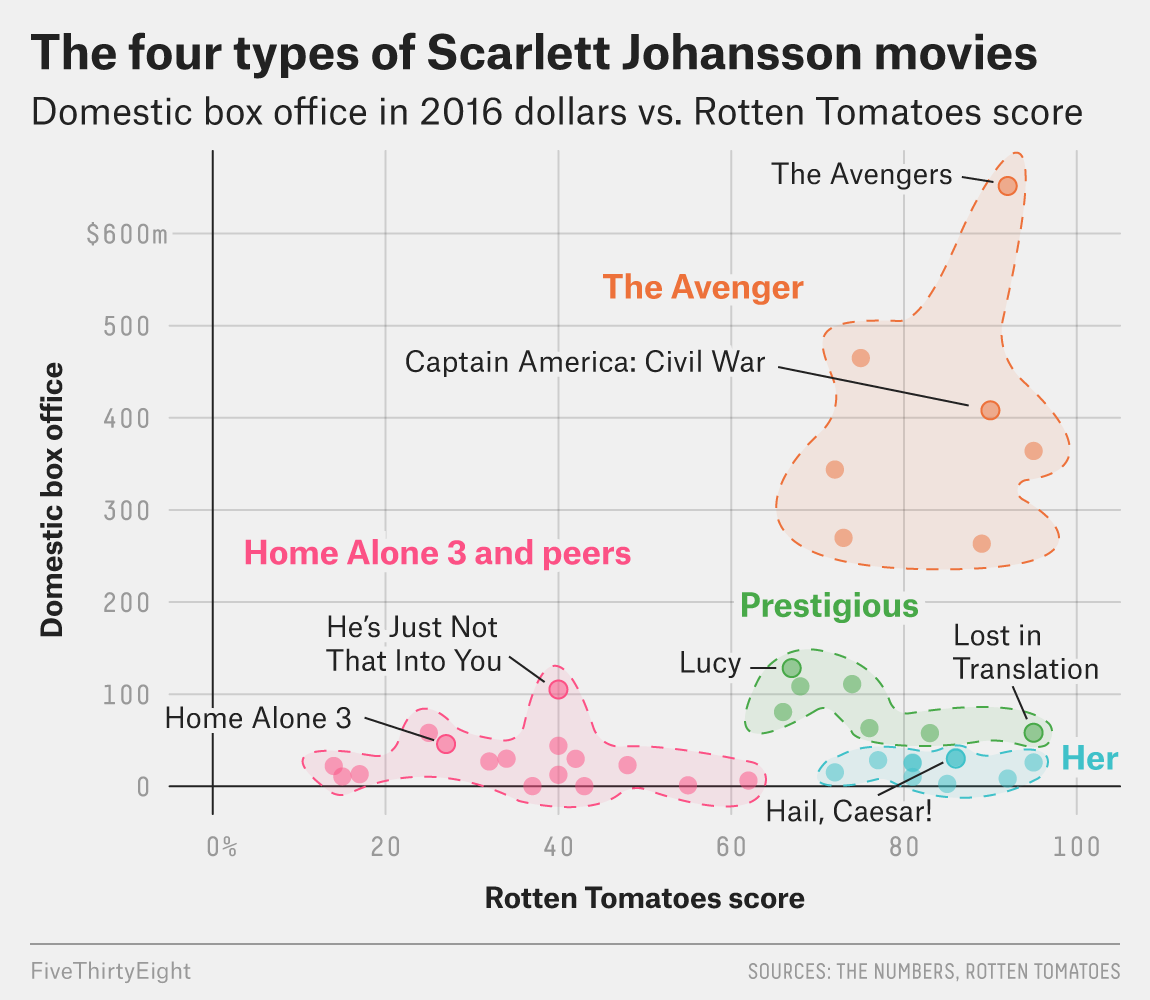 “I’m here to give your show what’s still missing.”

This is a fantastic category because an arbitrary set of boundaries — movies that made $50 million to $150 million domestically and earned a Rotten Tomatoes score above 50 percent — gave us a nearly perfect encapsulation of Johansson’s career:

This category has everything — it’s easily the most watchable of any of the Johannson tiers — but it mostly has the inexplicably well-reviewed and profitable “We Bought A Zoo.” It’s amazing that Matt Damon’s really that much of a sell, even in one of his least-smart and least-dreamy roles, according to a recent scientific study.

Johansson has been acting in major motion pictures since 1994, when she was not yet 10 years old. She’s been making movies for the vast majority of her life. She was invited to join the Academy of Motion Picture Arts and Sciences at age 19! When the rest of us were trying to convince a college senior to buy us Natural Light, she was voting for the Oscars. So I’m pretty confident that she can take it when I say she has been in a couple of movies that weren’t very good.

A few stand out. “He’s Just Not That Into You” performed the best at the box office, but it’s a lukewarm “Love Actually” knockoff that replaced “being based on Christmas” with “being based on a line from ‘Sex and the City,’” to little acclaim. “Home Alone 3” was her earliest film in this bunch, and, needless to say, her first entrée into a cinematic universe was not a good one. It is somehow the second-best film in its franchise despite a roaring Rotten Tomatoes score of 27 percent. “The Perfect Score” — a film about stealing the answers to the SAT that I distinctly recall seeing in theaters — would pair her for the very first time with one of the most productive creative collaborations of her career, Chris Evans, then just a standard hunk and not yet Captain America. Finally there’s “The Island,” a pretty good movie that was unfairly maligned because Michael Bay directed it. This is when Johansson arrives in the world of science-fiction movies, a well she has returned to productively since.

“But what makes me me is my ability to grow through my experiences. So basically, in every moment, I’m evolving, just like you.”

This category is a strong batch of films that did 70 percent or better on Rotten Tomatoes — great movies — but made roughly $30 million or less domestically — bad box office. They have a few things in common, namely that Johansson signed on to a project with an auteur or someone with a distinct if inexpensive cinematic vision that probably wasn’t bound for box-office greatness. And when she doesn’t work just for a paycheck, her work only gets better: 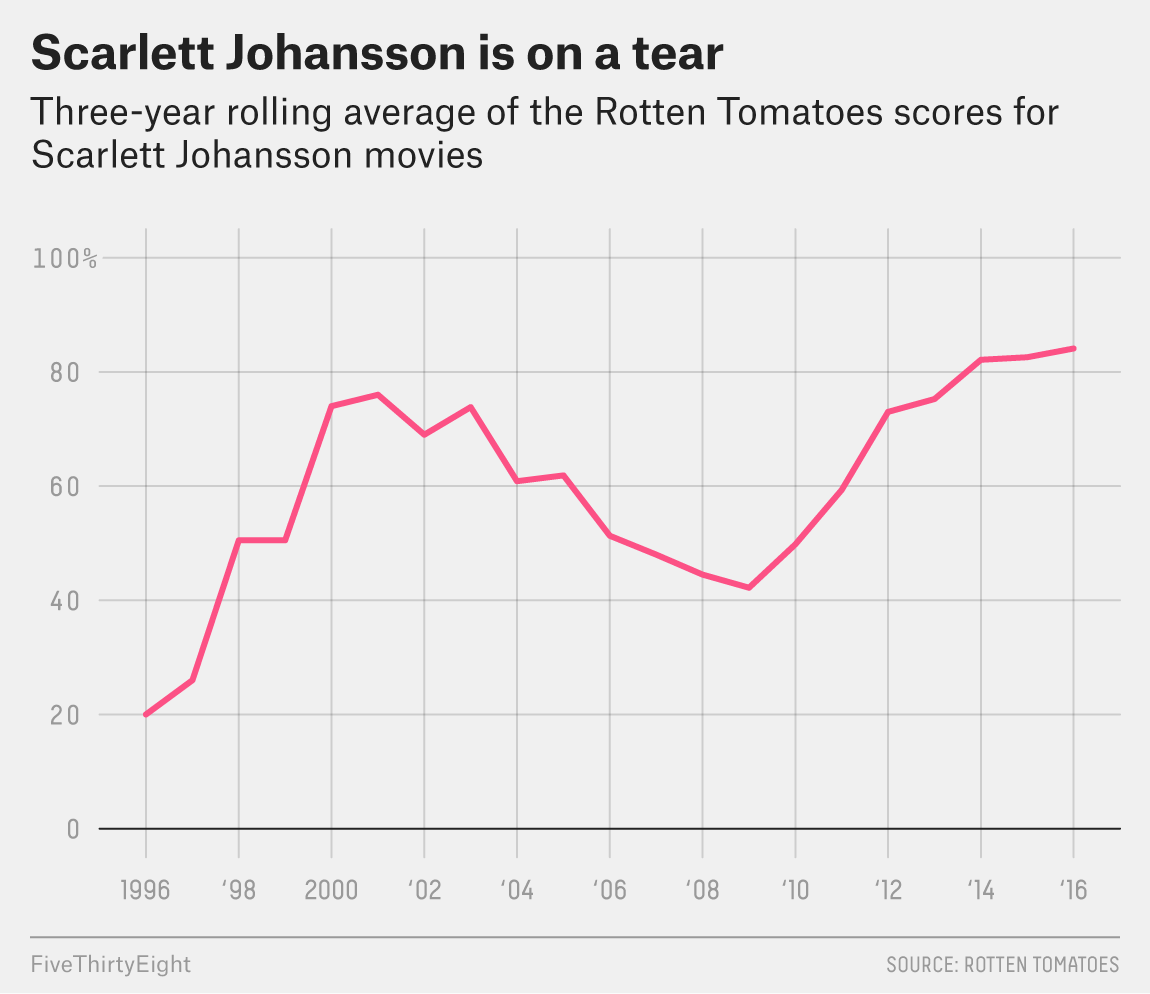 Johansson has shown a preternatural ability to work in any number of genres. She’s worked with Jon Favreau outside of the Marvel Cinematic Universe, in this category showing up in “Chef” and later as Kaa in his adaptation of “The Jungle Book.” Johansson has worked with Woody Allen three times, but I don’t hold that against her. She worked with the Coen brothers twice — once in “The Man Who Wasn’t There” and then later in a seriously delightful role in last year’s best critically acclaimed homage to old Hollywood,2 “Hail, Caesar!”

Here also are her turns in “Don Jon” with writer-director-lead-actor Joseph Gordon-Levitt, a passion project if ever there was one; “Ghost World,” the indie movie that announced to the world that she could nail a compelling adult role; and “Her,” the science-fiction film that got a lot of love in no small part because of her impressive vocal performance. In essence, one thing that makes Johansson so exciting is that even though she’s one of the most bankable performers in her craft, she’s willing to appear in something she thinks will make great cinema, regardless of whether it turns a profit.

“Because you need us. Yes, the world is a vulnerable place, and yes, we helped make it that way. But we’re also the ones best qualified to defend it. So if you want to arrest me, arrest me. You’ll know where to find me.”

In “Sing” and “The Jungle Book,” Johansson lent her signature voice to two animated films that made a combined bazillion dollars in 2016 but were both overrated and will soon be forgotten. Let’s move on.

Now we get to what will inevitably be remembered as the signature character of her career: her nuanced role as Black Widow, the chief protagonist of the single most successful film franchise ever. Here’s why her character is the main protagonist of the Marvel Cinematic Universe3: She is the primary character advancing the plot, she is growing and changing as an individual, and she’s the character that the audience most identifies with.

And among her higher-billed co-stars, she’s the only one who serves as an audience stand-in. Sure, there’s Hawkeye, but between the psychic possession in “The Avengers” and the family-man backstory established in the subsequent films, he doesn’t directly influence the good-guy game plan the way Romanoff does in the main storyline. She’s the one making sense of the incongruous team-up in “The Avengers,” she’s the audience surrogate who gets a romantic arc in “Age of Ultron,” she’s the one experiencing the same moral journey as the audience in “Civil War.”

Romanoff is also the only character who discernibly grows or changes over the course of the franchise. She’s alone here in part because the medium requires it; comic-book characters work best as stand-ins for ideas, so Tony Stark and Steve Rogers can grow only in their relationships with others and not internally. Stark’s engineer-it-till-it’s-fixed personality ossifies over the course of the franchise, and Rogers only gets more morally stubborn. But Romanoff? She’s reacting and growing with the changes in the world around her. Her arc is practically out of Joseph Campbell — a reluctant hero called to adventure and thrust into a world of supernatural powers, who is guided by a mentor who “dies” too soon, and who prevails as a common person against supernatural enemies. Stark, Rogers and the rest of them are the supernatural world she’s thrust into. They may be the protagonists of their individual trilogies, but only Johansson’s Widow could be considered the protagonist of the whole Marvel Cinematic Universe.