Seeing as Tuesday night is the deadline for filing tax returns, and seeing as data is FiveThirtyEight’s raison d’être, I was excited to find a set of statistics titled “Math Errors on Individual Income Tax Returns, by Type of Error.” Even better, that data has been published for tax years from 2001 to 2012.

It’s unsurprising that some Americans make mistakes on their taxes; the 1040 form (the primary tax form) has 77 line items, as well as a 189-page appendix of instructions. But Internal Revenue Service data shows that math mistakes — potentially an indication of how confusing that form is — have changed a lot over time. 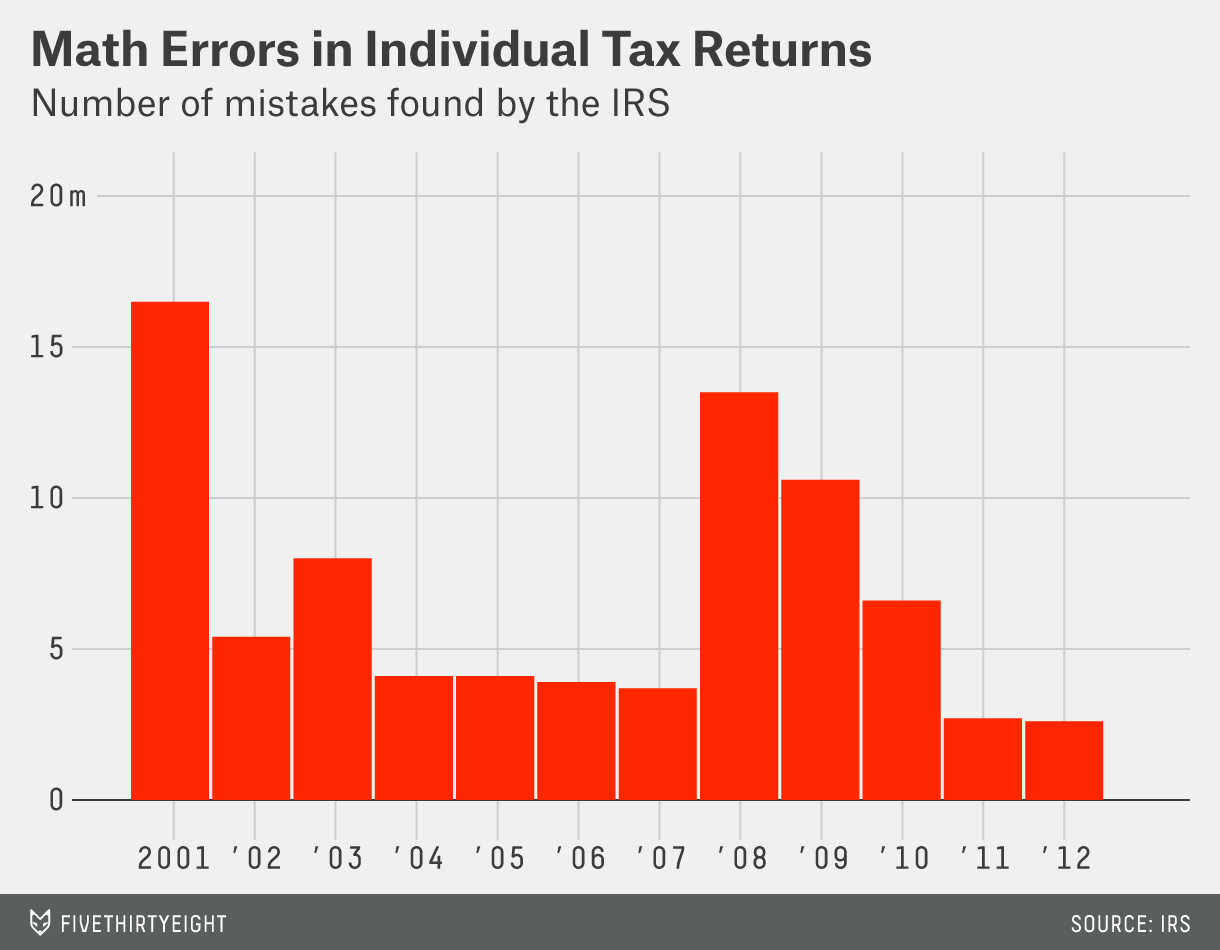 Why does the number of errors fluctuate so much?

We called the IRS, and apparently we weren’t the first to do so. Anthony Burke of the IRS media relations team said, “I’ve asked those [IRS tax] folks about that before, and I’ve never really got a clear answer about why the numbers are doing that.”

Burke did, however, point us toward the first-time homebuyer credit, which was introduced in 2009. Maybe the credit caused confusion, and as a result, more mistakes? But the biggest increase in math errors happened in 2008, not 2009. In any case, the IRS attributed only 132,550 math errors to the homebuyer credit in 2009: 1 percent of the total.

It turns out that the recovery rebate credit caused a lot of confusion. In 2008, 10,032,780 math errors occurred specifically with respect to that credit. So that explains the spike in 2008. But in 2009, there were only 877 mistakes on the recovery rebate credit. Instead, the Making Work Pay credit was causing trouble; it led to 6,412,242 errors. And if change is a source of confusion, then tax code reforms in 2001 could also explain the high number of errors that year.

Developments within the IRS may also play a role. A report from the Government Accountability Office in 2003 found that changes in math errors since 1996 were attributable to “statutory changes that expanded the types of issues the IRS could address with non-audit programs, declines in IRS enforcement staffing, and priorities in using staff.”

Moving from facts to theory, the decrease in errors since 2009 might also partly be explained by the increase in use of TaxACT, TaxSlayer, TurboTax and other online filing services. That assumes that such providers are less prone to mistakes than alternative solutions, such as Americans calculating their own taxes or using traditional accountants. The National Taxpayers Union has claimed that is not a safe assumption.