If Democrats read the fine print on the debt deal struck by President Obama and Congressional leaders, they’ll find that it’s a little better than it appears at first glance.

That’s not to say that the deal is a good one for them. It concedes a lot to Republicans, and Democrats may be wondering why any of this was necessary in the first place. But the good news, relatively speaking, has to do with the timing and structure of the spending cuts contained in the deal.

First, the timing: the cuts are heavily back-loaded, so the deal is unlikely to have much direct effect on the economy in 2012.

The spending cuts will proceed in two stages. There is an initial round of about $1 trillion in cuts, which will be locked in place when (and if) the deal is signed by the president. Then there is an additional $1.5 trillion in cuts, which will go into effect if Congress is unable to agree to the recommendations of a bipartisan commission (or “Super Congress”) by the end of the year.

The first round of cuts include “only” about $22 billion in reductions in 2012 spending — the same as the bill proposed last week by Representative John A. Boehner, which provided some of the outlines for this deal. That would reduce 2012 G.D.P. by just 0.1 percent, other factors being equal.

The second and larger round of cuts, according to the White House’s summary of the deal, would not include any reductions to the fiscal year 2012 budget. Instead, those cuts would kick in during 2013 and last through 2022.

Congress could decide to accept the bipartisan commission’s recommendations, which would override the second round of cuts and identify some new mechanisms to provide for $1.5 trillion in deficit savings, although for reasons I will detail below, this is unlikely. And even if it did, one presumes that Congressional Democrats would insist that the new measures abide by the spirit of the original bill and back-load the cuts.

The bill, in short, is not likely to have a profound effect on the recovery in the near-term. It should be noted, of course, that the recovery still has plenty of its own problems, and that fiscal policy in 2012 will tend to be contractionary on the whole as the last vestiges of the 2009 stimulus roll off the budget and as the payroll tax cuts agreed to for 2011 expire. But that would be true even if a “clean” debt ceiling increase had been adopted with no changes to fiscal policy.

Where the deal may create more problems is in 2013 and 2014. The economy may not be fully healthy by then — global financial crises often take 5 years or more to recover from. But the austerity measures will really start to kick in. Whichever party has a strong 2012 could therefore have a rough 2014.

Of course, whichever party was elected in 2012 could begin charting its own course for fiscal policy in 2013. The deal employs some mechanisms to create inertia behind the cuts — in particular, caps on discretionary spending — but fundamentally it is very difficult to bind the actions of a future Congress.

That gets at the other reason why this deal should be slightly more palatable for Democrats. The further you go out in time, the more likely it is that the cuts enshrined in this deal will have been swamped by more recent changes to policy.

That isn’t to say that the cuts are an accounting fiction. Particularly when control of the government remains divided, the status quo may tend to prevail. But they need to be discounted fairly heavily, especially in the back half of the deal where the bulk of the cuts are concentrated.

One narrow way to read the deal is that both sides got what they wanted. President Obama got an assurance that the debt ceiling will be raised through the end of his first term (although the increase will take place in stages). Republicans achieved their dual goals of avoiding tax increases and getting a dollar-for-dollar increase in spending cuts to match the amount by which the debt limit will be raised.

The problem with that interpretation, of course, is that the Republicans’ goals were much more ambitious — and they were able to achieve them all the same. That’s why by any reasonable standard, this deal was a “win” for Republicans on the policy merits.

But given that Democrats were willing to accede to the constraints demanded by Republicans, they were able to exert a lot of control over the substance of the cuts. In particular, the first round of cuts will include $350 billion in defense savings, while the second round would include between $500 and $600 billion in defense cuts if no bipartisan agreement is reached.

There are some semantic distinctions to heed here — for instance, between defense cuts and “security” cuts. But the bottom line is that the deal will take a big bite out of the Pentagon’s budget. Close to half of the overall cuts, not counting interest savings, will come from defense and related areas.

This ought to be a big deal for Democrats, since many of them are favorably disposed toward cuts in the defense budget. The table below reflects the views of Democratic and Republican adults toward cuts in 18 areas of federal spending as derived from the 2010 General Social Survey. The scale runs from 0 (meaning that voters would like to see increased spending in that area) to 100 (meaning that voters would like to see spending cuts). 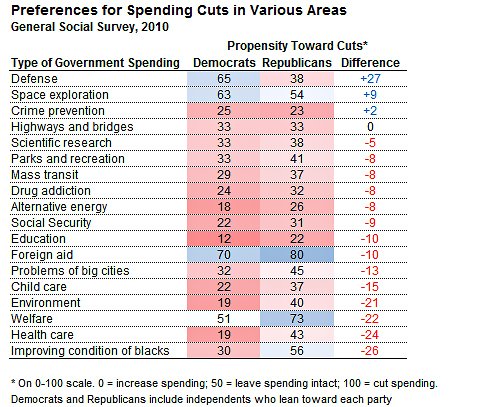 This has two major implications. The first is simply that if you’re scoring the deal as a Democrat, it makes the cuts less painful. In fact, if you’re a Democrat (or a libertarian) who is not just indifferent toward defense cuts but actually in favor of them, you might even regard the cuts to defense spending as a “win,” making up for the “loss” incurred from cuts to other types of discretionary spending.

The other implication comes from the effect this might have on the bipartisan panel. If its recommendations are not agreed to — or if it can’t come to an agreement in the first place — $1.5 trillion in cuts would be triggered, half of which would come from defense.

If you’re a Democrat and you must accede to $1.5 trillion in cuts — and that’s literally the situation that Democrats will find themselves in if the deal passes through Congress — it’s going to be hard to do better than this $1.5 trillion in cuts. They are very heavily loaded with defense cuts, while containing few changes to entitlement programs or to programs which benefit the poor.

So Democrats will have very little incentive to vote for the panel’s recommendations unless they include tax increases. Does that mean that Republicans will agree to tax increases? Perhaps the Republicans on the committee will consider them — but it is unlikely that rank-and-file in the House will give their sign-off.

In other words, this probably leads us to a stalemate: Democrats cannot do much better unless there are tax increases, and Republicans will not be eager to raise taxes. So the automatic cuts embodied in the trigger are quite likely to go into effect — and those are the sorts of cuts that Democrats, not Republicans, would prefer to make to the budget.

Nevertheless, this will be an extremely difficult deal for Mr. Obama to sell to Democratic voters, and with good reason.

In the past, the debt limit has not been used as a vehicle for substantial changes to fiscal policy. And even if Republicans were keen to exploit the law this time around, the fight could have been avoided had Democrats agreed to a longer-term increase in the debt limit while they still controlled Congress in 2010, particularly during the lame-duck session.

Moreover, Republicans had conceded early on that the debt limit must be increased, calling into question how much leverage they had.

But the White House’s strategy was confused — at first, calling for a “clean” vote on the debt ceiling, but soon backing off that position without a clear set of objectives to replace it.

And then, toward the end of the process, Mr. Obama appeared to usurp Mr. Reid, brokering a deal with the Republican leader Mitch McConnell while Mr. Reid was trying to whip votes for his bill, which would have included a long-term debt ceiling extension but fewer substantive spending cuts. This led to the highly unusual spectacle on Saturday of the Republican leaders bragging about their potential deal with the Democratic White House while an annoyed-looking Mr. Reid denied that a deal was imminent.

Overall, the deal served to confirm the worst suspicions held by some Democrats: first, that the White House is unwilling to drive a hard bargain or is poor at negotiation. And second, that it is loath to stand up for liberal values or has inherently conservative policy preferences.

These critiques are more common among those Democrats who criticize the White House frequently. But I have also heard them in recent days from Democrats who tend toward the center-left and who tend to defend the White House, some of whom cite the poor precedent that the deal has established. Meanwhile, Mr. Obama’s approach has been criticized by some influential Democrats in Congress, like Raul M. Grijalva, the co-chair of the Congressional Progressive Caucus.

Fiscal austerity at a time of economic distress, and on largely Republican terms, is not what Democrats thought they were getting when they elected Mr. Obama in 2008. Mr. Obama might have done more to make short-term stimulus — like further reductions to the payroll tax, which would would not have violated the Republicans’ ostensible goals — the price for long-term austerity.

Although it is impossible to prove one way or the other, I am not persuaded by the notion that Mr. Obama could not have delivered a better result to Democrats had he done more to stand his ground. Despite the dissent in the Republican caucus, which had originally seemed like a tactical victory for Democrats, the compromise wound up looking more like Mr. Boehner’s original bill than Mr. Reid’s.

With all that said, some of these concerns have to do with the aesthetics of the deal as much as the policy substance. The fine print is not quite as bad for Democrats as the headline number of $2.5 trillion in spending cuts. That’s why some Republicans are having trouble being sold on the deal as well as some Democrats.