The Federal Reserve is becoming more pessimistic about the future.

On Wednesday afternoon, the Fed’s main policy-making body — the Federal Open Market Committee (FOMC) — released its latest quarterly projections. The forecasts show that FOMC members have, once again, lowered their expectations of U.S. economic growth in the “longer run.”

Specifically, the midpoint forecast for real gross domestic product growth in the longer run was lowered to 2.15 percent, down from 2.20 percent in June. In early 2009, when the Fed first began releasing projections, the longer-run midpoint forecast was 2.60 percent. That’s a huge drop. 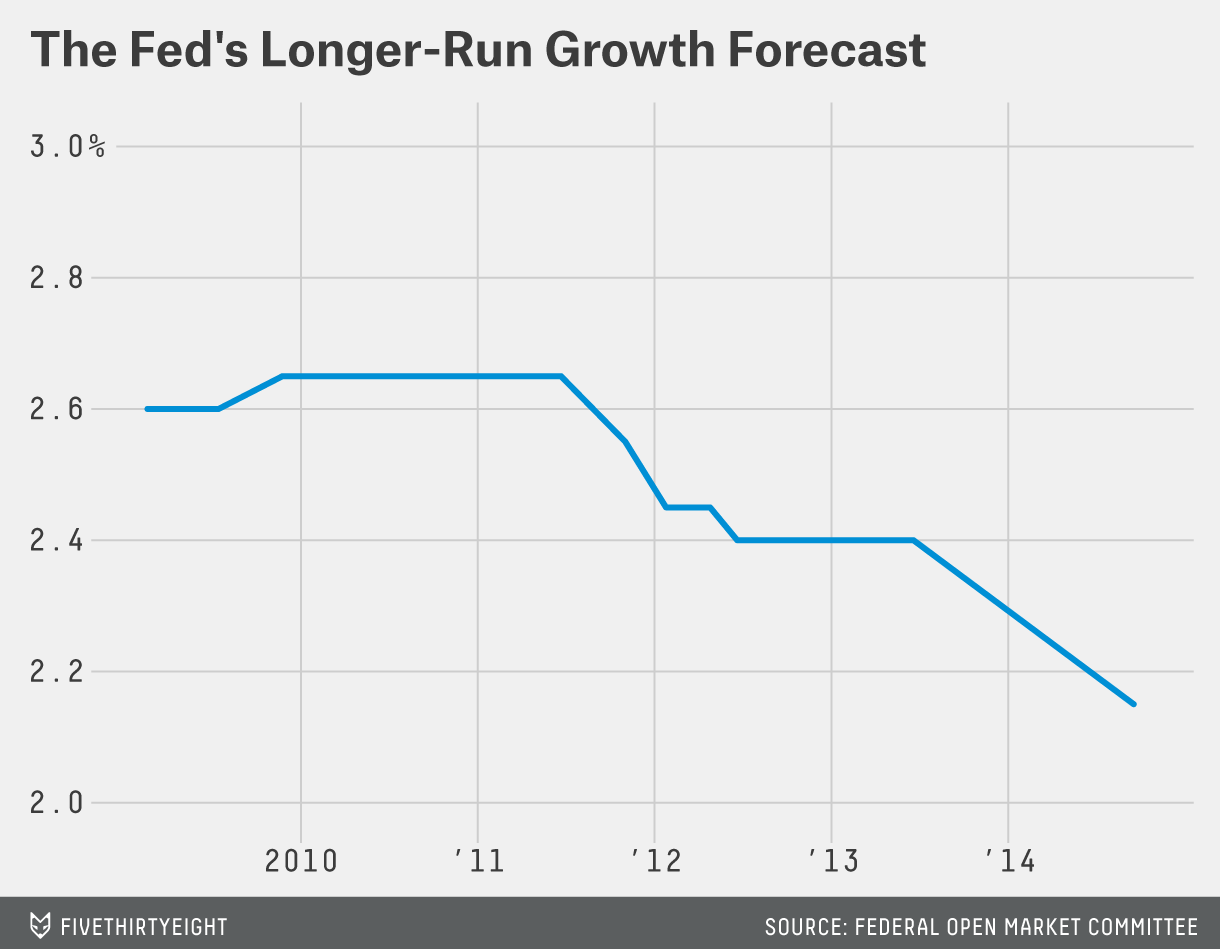 This midpoint is taken from the Fed’s “central tendency” — the bulk of the 17 forecasts submitted by FOMC members that remain after removing outliers. Technically, the Fed defines longer-run forecasts as representing “each participant’s assessment of the rate to which each variable would be expected to converge under appropriate monetary policy and in the absence of further shocks to the economy.” This is the growth one would expect when economic conditions are normal.

This “longer run” growth projection is equivalent to potential growth — defined as the economy’s growth rate when using all available resources but without leading to debilitating inflation. And the Fed is not alone in revising down its views of long-run growth: The nonpartisan Congressional Budget Office also revised down potential GDP this year.

As I wrote in March, a slowing of the U.S. economy’s potential growth rate concerns the Fed. Lower potential growth is related to a different but similar notion of secular stagnation that has been much discussed, especially after a speech last fall by Larry Summers, a former top economic adviser to President Obama. Secular stagnation, or a secular slowdown, is when an economy has a prolonged period of anemic growth.

Stanley Fischer, an esteemed economist, alluded to these theories last month in his first major speech as the Fed’s new vice chairman. “How much of this weakness on the supply side will turn out to be structural –perhaps contributing to a secular slowdown — and how much is temporary but longer-than-usual-lasting remains a crucial and open question,” he said.

According to its latest projections, the Fed is telling us to lower our expectations for the U.S. economy.