Greece is staring into the economic abyss. The Greek government is expected to default on its debt payment to the International Monetary Fund (IMF), due Tuesday. The government shuttered the country’s banks this week, leaving Greek citizens scrambling to withdraw cash from ATMs, but at a limit of 60 euros (or about $66) per day.

What comes next for Greece is hard to say. Greek banks are under immense pressure to meet the panicked demands of their customers, but the system is running out of cash. A hastily called referendum scheduled for Sunday will allow Greeks to vote on a proposed agreement with the IMF and other creditors. If the deal is rejected, many economists believe Greece will likely leave the eurozone and issue a new currency (like the old drachma) that would be severely devalued against the euro.

While the future is highly uncertain, it’s pretty clear what got Greece to this point. Looking at a broad range of economic and financial statistics, Greece emerges as a stark negative outlier in the eurozone. On many measures, Greece is far and away the worst-performing eurozone country; in other cases, it shares the ignominy.

Take GDP, for example. Greece has suffered and is suffering — by far — the worst recession of any eurozone country. Since 2007, or just before the global financial crisis and recession, Greece’s real GDP has declined by over 25 percent. For U.S. readers, that’s roughly analogous to the Great Depression, when GDP fell about 27 percent between 1929 and 1933. Greece was one of the poorer countries in the eurozone before the onset of the global financial crisis, but it has gotten even poorer — per capita GDP fell from 23,500 euros in early 2007 to 19,600 euros in late 2014, a 17 percent decline. Here’s how Greece compares to the countries in the eurozone with the biggest economies and those that have struggled the most. 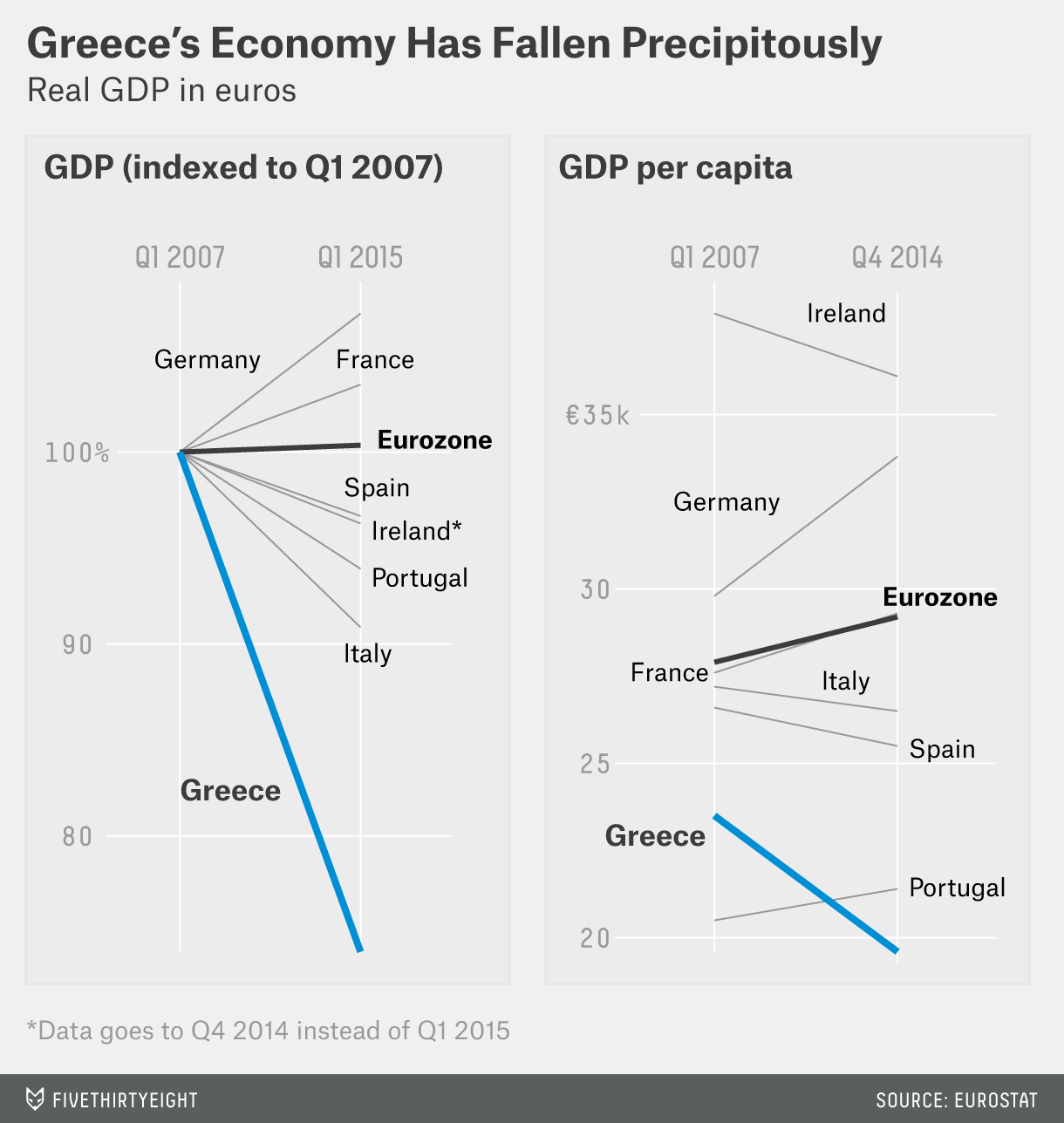 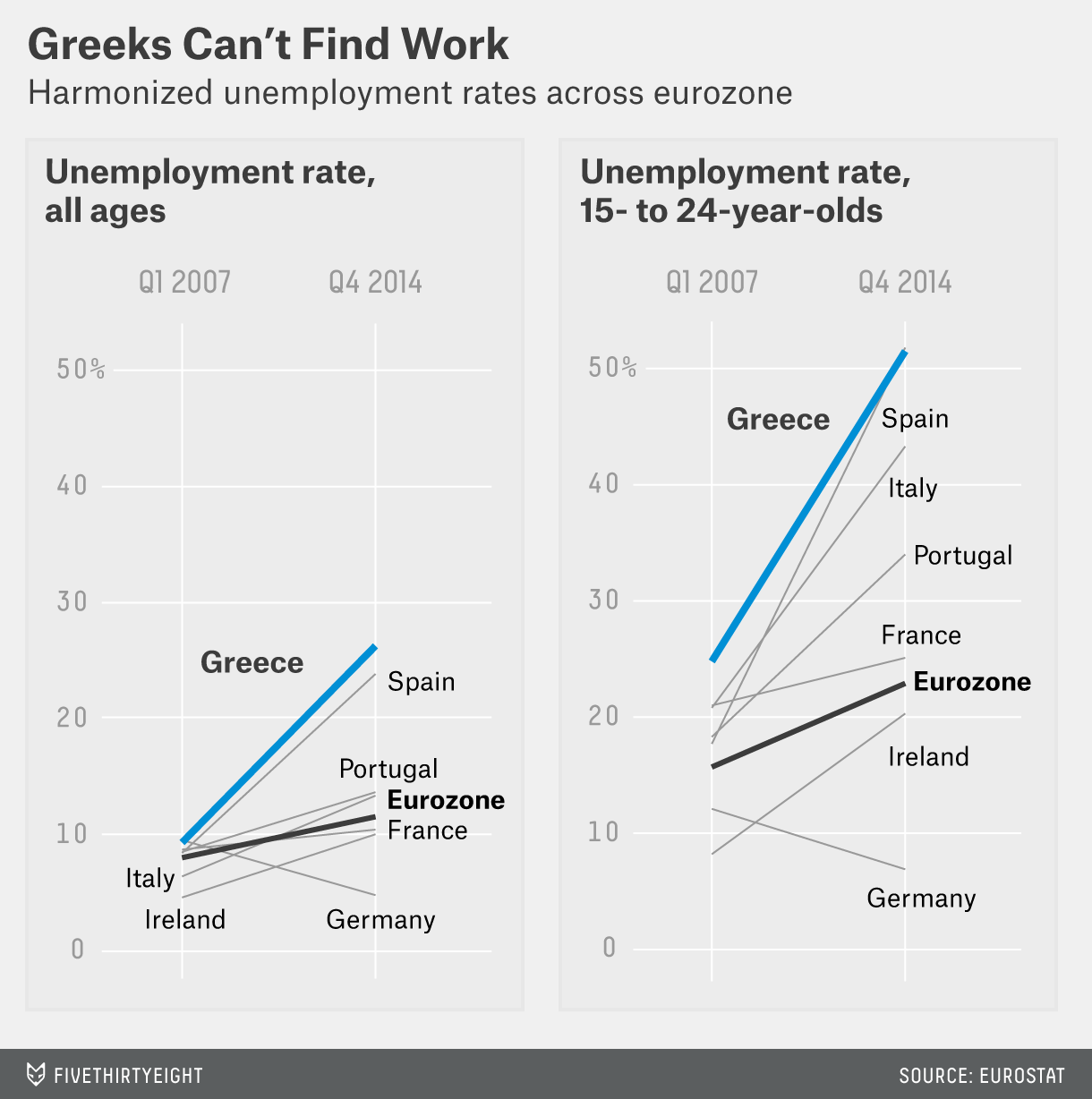 What’s the driver of all this economic misery? Well, the answers depend on whom you ask. Germany, the IMF and other creditors see Greece’s huge amount of government debt as the main culprit. But many Greek politicians and citizens point to what they consider unnecessary and counterproductive austerity policies — the cutting of government expenditures and the raising of taxes — as the source of their current ills. Either way, the Greek government now has to pay far more to borrow in the open market. Because the European Central Bank lowered eurozone-wide short-term interest rates between 2007 and 2015, most countries now pay a lower interest rate on their government debt — but not Greece. 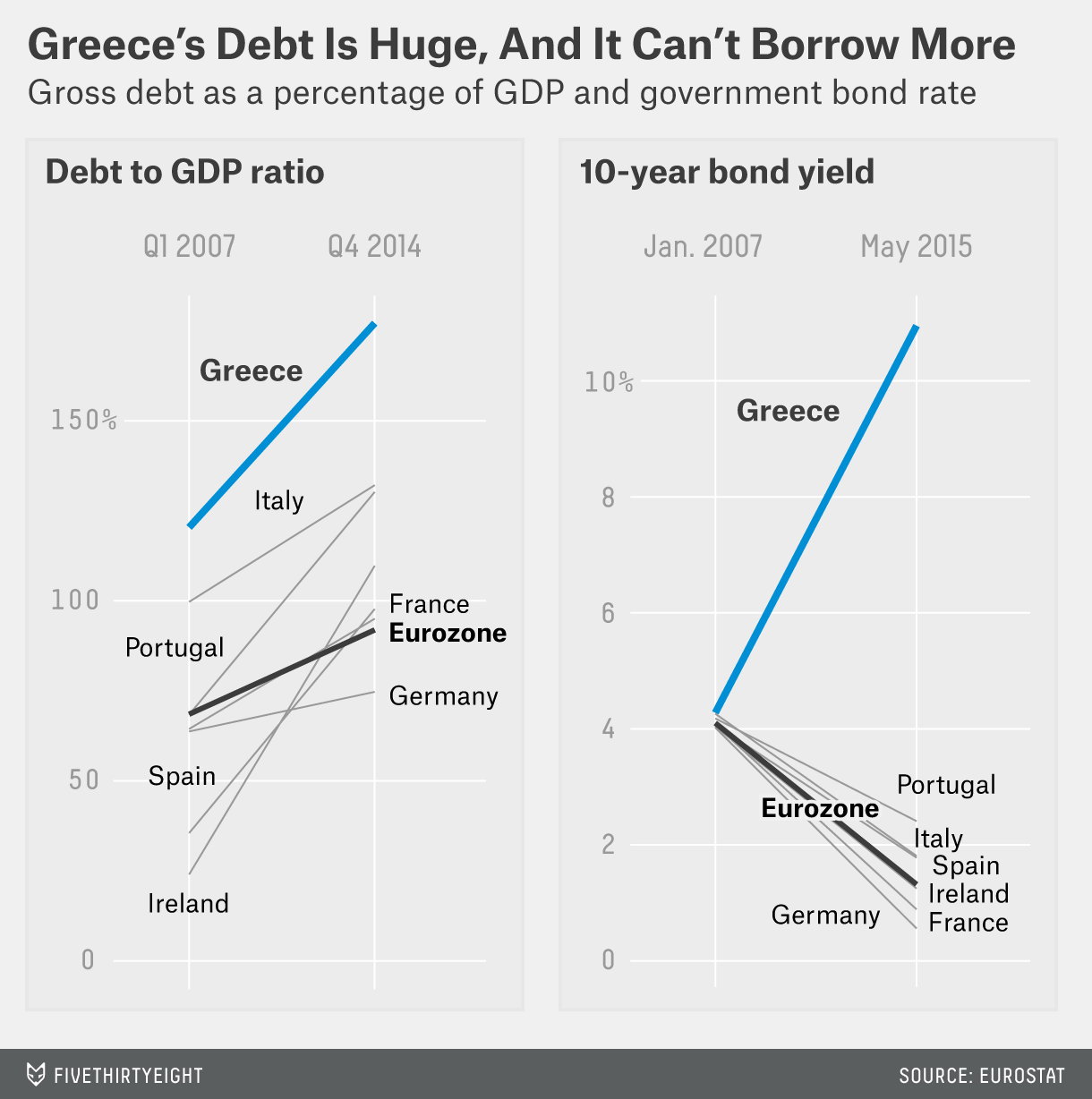 Following months of tense negotiations between the Greek government and its creditors, the recent standoff is likely to accelerate the already sharp withdrawal of deposits from Greek banks. Deposits have declined about 20 percent between December 2014 and May of this year, and the exodus of cash from the banks likely accelerated in June. 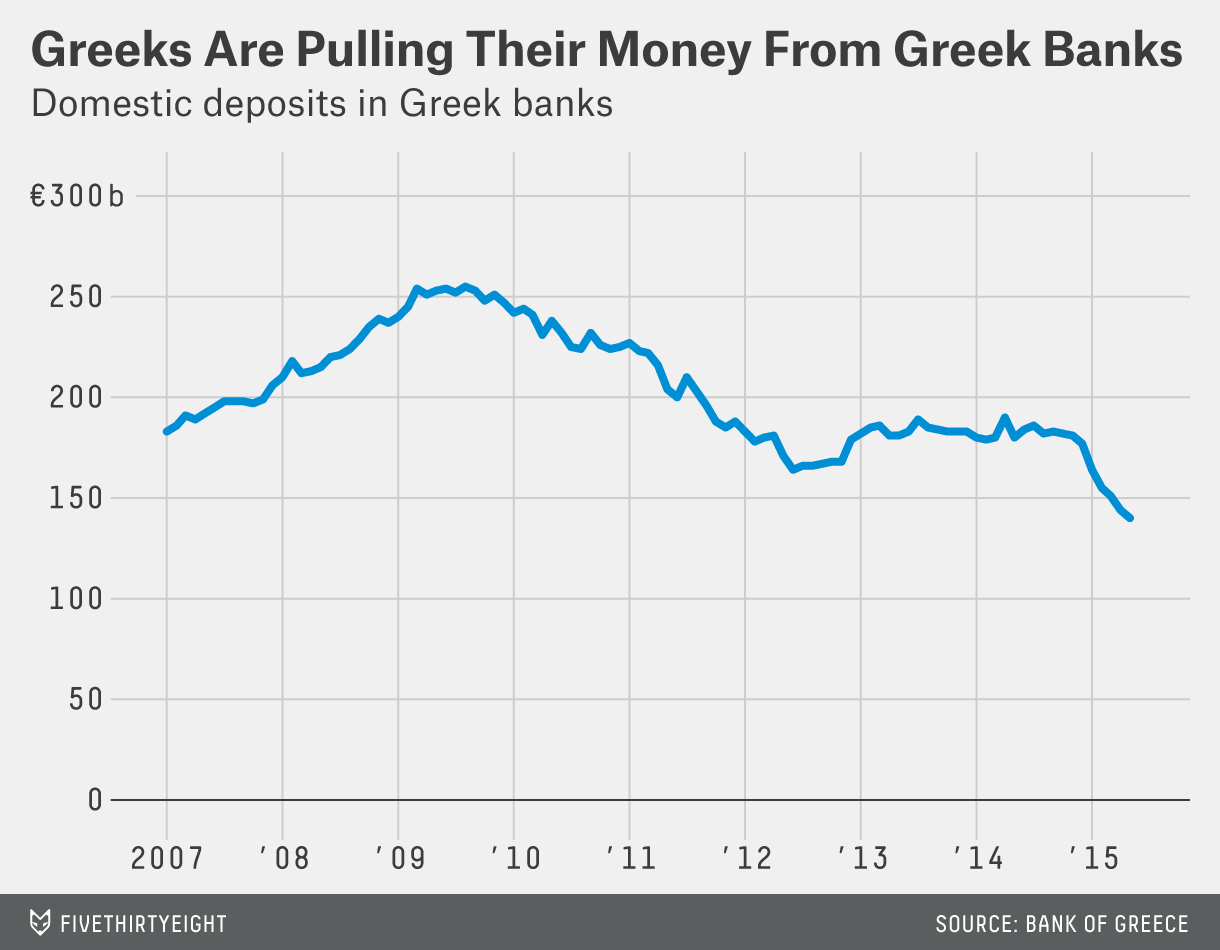 The crisis is also affecting stock markets around the world. Like the banks, trading on the Greek stock exchange is closed this week, but the exchange has fallen 3 percent in June relative to the previous month, and it’s down about 50 percent since November.

Greece’s collapse might adversely affect the teetering eurozone economies such as Portugal and Spain, but it does not seem likely to unleash economic contagion on the world economy. Following this week’s drama, however, it’s a near certainty that Greece’s economy will get worse before it gets better.