In the days just after the Sept. 11 attacks, I called an uncle in Wyoming to check in and let him know how I was doing. At the time, I was living in a part of Brooklyn quite close to the World Trade Center site. But he made it clear that I wasn’t the only one on that phone call who was shaken. “You know, we really felt those attacks out here, too,” I remember him saying.

I hadn’t yet gone to graduate school in political science at the time, but the bulk of political scientists wouldn’t have been surprised by my uncle’s level of concern. A long, distinguished body of research in political science suggests individuals’ responses to major events — their engagement as well as their attitudes — tend to depend more on factors like their political partisanship than on where they happen to live or their personal experiences.

But that conventional wisdom is what makes recent research on the political impacts of Sept. 11 a striking and noteworthy departure. This new research shows that with an event as powerful, evocative and tragic as Sept. 11, personal connections and even proximity to the tragedy can have a durable political effect on individuals’ political attitudes and activities. In the case of 9/11, people became more active in politics, more supportive of anti-terror spending and more likely to register to vote as Republicans.

Consider the recent study on 9/11’s political impact by political scientist Eitan Hersh, published last year in the Proceedings of the National Academy of Sciences. In it, Hersh used the New York state voter file to identify 1,729 9/11 victims from the state, and then traced how their families’ political activities changed as compared to a control group chosen to be highly similar in the pre-9/11 period.

Before the attacks, the victims’ families differed little from the control group identified by Hersh’s algorithms. But in the aftermath, members of the victims’ families were more likely to turn out to vote in general elections than similar New Yorkers, an effect that grew as large as 4 percentage points and which only dissipated in 2012. That might not seem like much, but it rivals the effect of get-out-the-vote efforts like door-to-door canvassing. The victims’ families were also more likely to make donations to federal candidates, another difference that was visible for years following the attacks.

Hersh finds that losing someone in the 9/11 attacks wasn’t just mobilizing, it also shifted party loyalties. Family members of those who were killed were approximately 5 percentage points less likely to still be registered Democrats in 2013 when compared to a similar control group that didn’t lose family members that day. There were concomitant upticks in registration as Independents or Republicans. Whether that is because the victims’ family members became more hawkish on foreign policy, because they were impressed by the performance of GOP officials in the wake of the attack, or for other reasons isn’t known.

In his research, Hersh compares victims’ family members to New Yorkers who are similar in terms of their pre-attack politics, their demographics, and the communities where they lived. So even his control group was drawn from people like me, people who were living in the New York area at the time — people who might remember the fighter planes patrolling the city’s skies, or the convoys of emergency vehicles on area roads. Did simply living near the attacks also shape people’s politics?

To get at that question, I used a panel survey conducted by the National Election Study (NES) between 2000 and 2004.1 I measured how far each respondent lived from the attack sites. (Keep in mind that the sites were in New York City and Arlington, Virginia, so the people living nearest to them were not especially likely to be conservative.) I then estimated models controlling for various individual-level factors2 to see whether Americans’ proximity to the 9/11 sites predicted their support for anti-terror spending in 2004, more than three years after the attacks.

In the figure below, I estimated whether people living within each distance from a Sept. 11 attack site were more supportive of anti-terror spending. 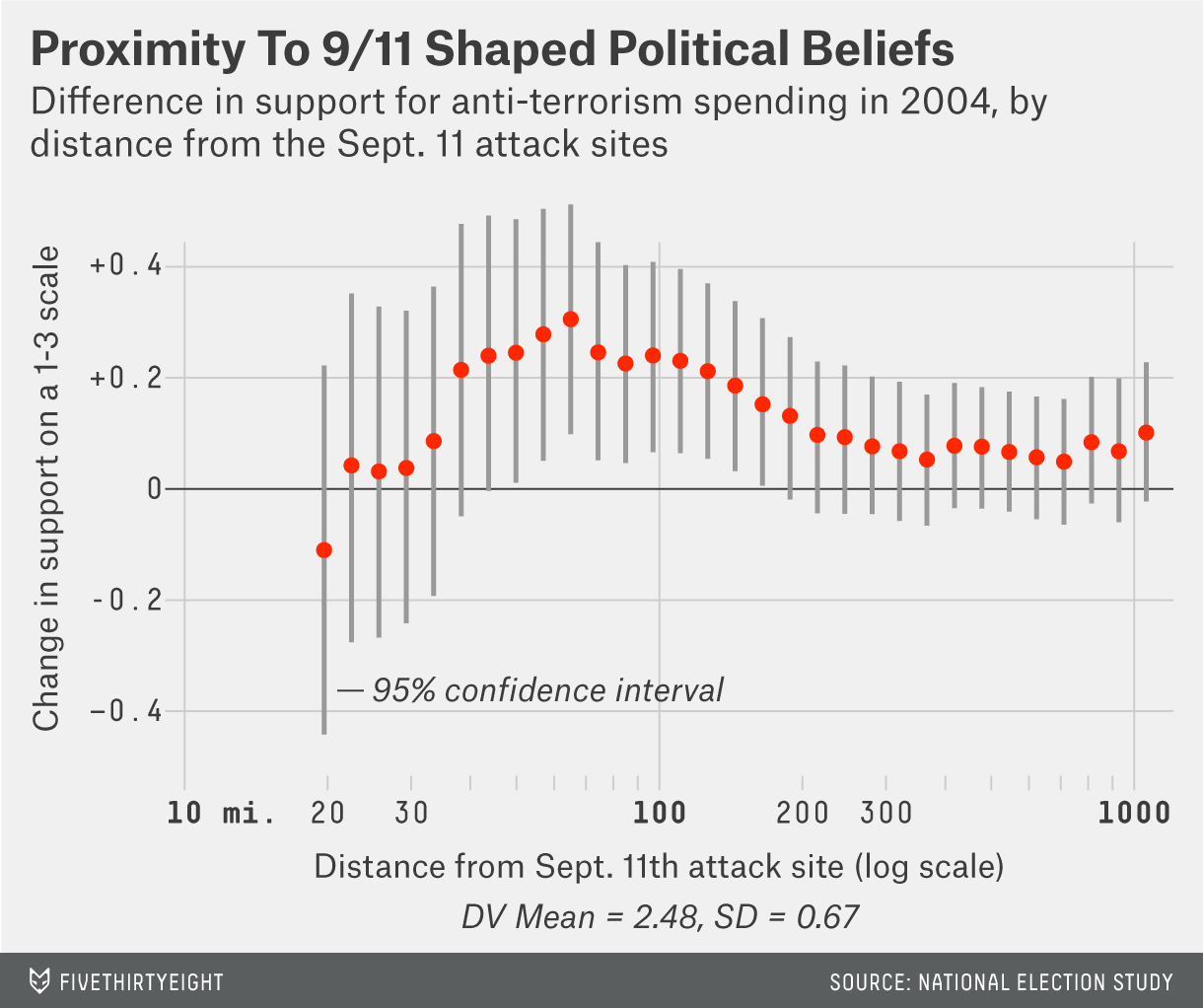 For example, starting from the left, we see that the 3 percent of NES respondents who lived within 19 miles of a 9/11 attack site were on average -0.11 less supportive of anti-terrorism spending than those who lived farther away.3 However, the sample is sufficiently small that the confidence intervals span from -0.48 to 0.26, as illustrated by the left-most vertical line. In other words, there’s not much to say either way.

Still, as we get to respondents who live a little farther from the attacks, we also get a larger sample size — and a more precise estimate. Respondents living within 52 miles of either 9/11 site are 0.27 higher on the anti-terrorism spending scale than those who lived farther away, with a 95 percent confidence interval from 0.04 to 0.51. Significant results persist for thresholds between 52 miles and 146 miles. At its maximum size, the effect of living within 70 miles of a 9/11 site is 0.28, a sizable change in attitude. And I’ve confirmed that no such pattern exists in spending preferences pre-9/11, making it more likely that this relationship was indeed a product of 9/11 and its aftermath.

People who live in the areas near New York City and Arlington aren’t known for their conservatism. But in 2004, they were notably more supportive of anti-terror spending.

One rule of thumb, well grounded in political science, is that individuals’ self-interest and personal experiences are not closely connected to their attitudes. But the Sept. 11 attacks 13 years ago are an important exception: Their political impact was pronounced and long-lasting on some of the people closest to the tragedy.