One point frequently raised in the coverage of Representative Anthony D. Weiner is that David Vitter, the Lousiana Senator who in 2007 acknowledged that he was a longtime client of a Washington-based prostitution service, did not resign his seat. In fact, Mr. Vitter won re-election with 56.6 percent of the vote last November.

It’s not clear, however, that Mr. Vitter paid no price at all with his constituents. Mr. Vitter’s 19-percentage point margin of victory over his Democratic opponent, Representative Charlie Melancon, was quite solid. But incumbent Republican senators in five other Southern states — Alabama, Georgia, North Carolina, Oklahoma and South Carolina — won their elections by an average of 28 percentage points. (That’s what happens when you’re an incumbent in a very Republican part of the country in a very Republican year.) 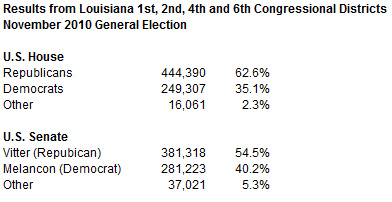 In other words, Mr. Vitter underperformed the Republican incumbents by about 8 percentage points — although some of these votes went to third-party candidates rather than to Mr. Melancon.

We cannot know for sure whether this was because of Mr. Vitter’s sex scandal rather than some other factor (Mr. Melancon was not a bad challenger, for instance). And no two sex scandals are quite alike.

But a recent paper by Nicholas Chad Long of St. Edward’s University suggests that Mr. Vitter’s experience might be fairly typical. The study, which examined United States Senators running for re-election from 1974 to 2008, found that scandals involving immoral behavior cost the incumbent an average of 6.5 percentage points.

Mr. Weiner won re-election with 60.8 percent of the vote last year, so an 6.5-percentage point penalty would have left him with enough votes for a majority. On the other hand, Mr. Weiner drew a relatively obscure challenger last year in Robert L. Turner, a businessman with no electoral experience. His district — unlike almost all others in New York City — is only a few points more Democratic than the country as a whole, so a stronger Republican opponent might give him quite a few problems. (Mr. Long’s study found that scandal-plagued incumbents draw more qualified challengers.)

The good news for Mr. Weiner? Mr. Long’s study found that Republicans may pay a bigger price than Democrats do. Combining all types of scandals — involving everything from sexual infidelity to financial impropriety — Republican incumbents lost an average of 7.7 percent of the vote, while Democrats lost 4.9 points.