The National Bureau of Economic Research announced on Monday that the U.S. is officially in a recession. But while the country’s economy is still in dire straits, economists now think the recovery might be quicker — and less painful — than they were expecting a few weeks ago. Our survey of 34 quantitative macroeconomic economists, conducted in partnership with the Initiative on Global Markets at the University of Chicago Booth School of Business, found that respondents are increasingly optimistic about the country’s economic trajectory — at least when it comes to employment. 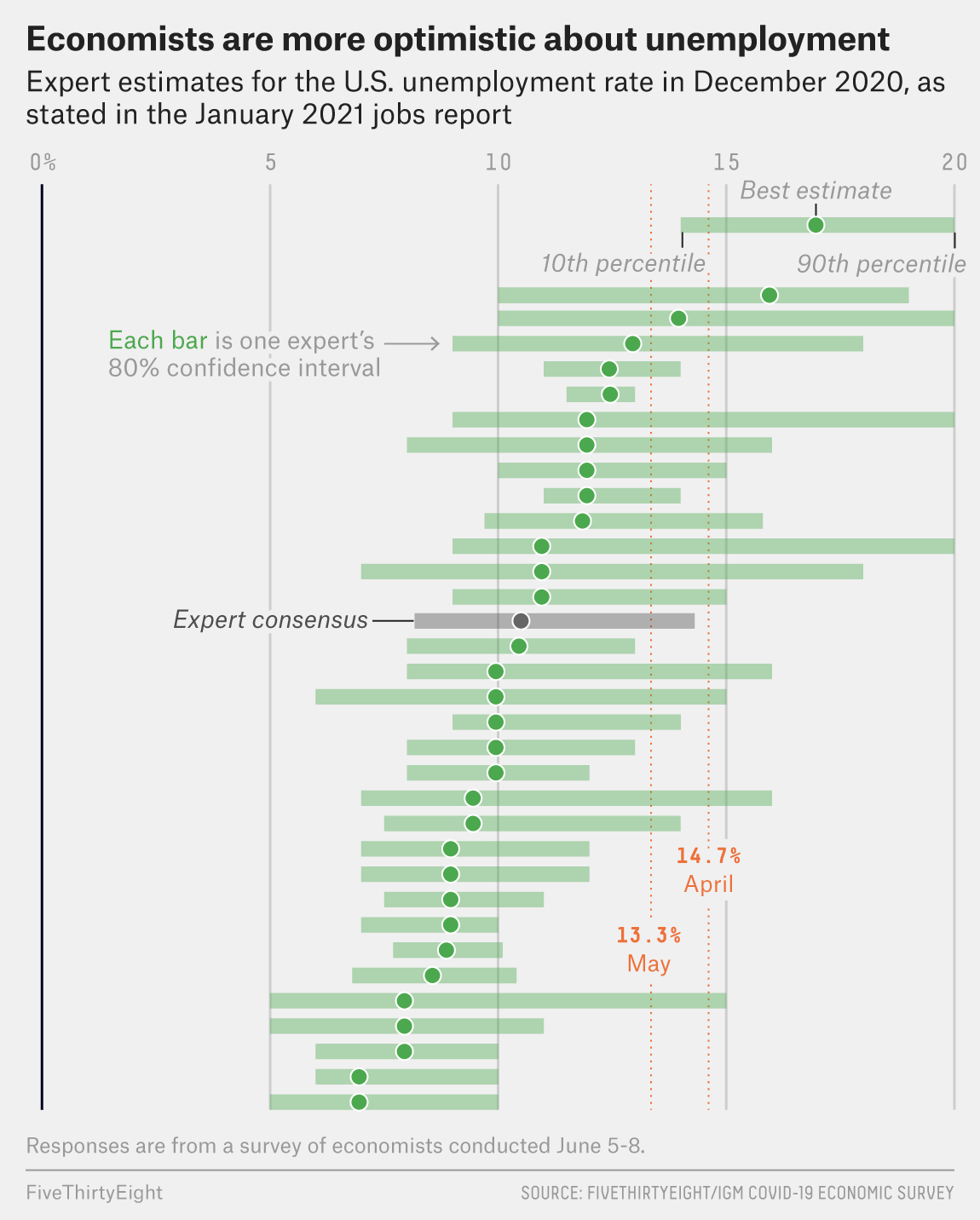 But the better-than-expected jobs numbers didn’t convince the economists in our survey that the economy will be back to normal anytime soon. Their forecasts for growth in gross domestic product, for instance, didn’t change much over the past few weeks. Respondents do think the economy will be growing by the end of the year — but nowhere near as quickly as it fell. “Clearly, the economy has started to climb out of the hole, but it’s a very deep hole to start with, and our respondents are not confident that we have begun a strong and sustained recovery,” said Allan Timmermann, professor of finance and economics at the University of California, San Diego. Timmermann and Jonathan Wright of Johns Hopkins University have been consulting with us on the design of the survey.

One of the economists who reduced their estimates the most was Wright. “I was very surprised by the May jobs number,” he said. “I had expected a number up around 17 or 18 percent in June with continuing job losses. It looks to me like the process of calling people back to work has begun earlier than I had expected. The fact that it begins early somewhat reduces the damage done and so makes the outlook for the second half of the year better.”

Valerie Ramey, professor of economics at University of California, San Diego, echoed Wright’s more hopeful sentiments. “The jobs report for May was a complete surprise to me (and many others),” Ramey said. “States are loosening up restrictions faster than I anticipated.” She added that the combination of those two factors — along with what she saw as “promising evidence on the COVID front” — made her more optimistic about both the pandemic and the economy. “If COVID is not so deadly, I think that even a second spike in cases will not result in severe lockdowns, such as the one we have just experienced.”

But not every expert we surveyed was equally swayed by the less-horrible-than-expected unemployment figures. Menzie Chinn, professor of public affairs and economics at the University of Wisconsin, said he was weighing the Bureau of Labor Statistics’ ongoing difficulties in collecting data on laid-off workers, along with developments in COVID-19 cases. He kept his December unemployment forecast the same as it had been two weeks ago, when his forecast was among the most optimistic. He told us he anticipated that the BLS will eventually be able to resolve an issue with worker classification that may have excluded some furloughed workers, which could cancel out the effect of more people going back to work. Unlike Ramey, he was expecting a resurgence in cases that could lead to new state-level lockdowns. “In this respect I’m more of a pessimist than the average respondent, I expect,” he said.

And even if the latest consensus is that the labor market is rebounding more quickly than expected, the economists weren’t optimistic that unemployment will plummet over the coming months. In our first survey, experts thought there was a 37 percent probability that the unemployment rate wouldn’t return to single digits until the second half of 2021 or later; now that probability is only 20 percent. Yet they still think it’s more likely than not that unemployment stays above 10 percent the entire rest of 2020.

“The rebound in jobs in the May data may be the easy part of the recovery in the sense that some workers were furloughed and are being called back as the economy reopens,” Wright said. “But other workers have more permanently lost their jobs.”

Still, the survey was somewhat sanguine about unemployment overall. That was also true for the experts’ assessment of what will happen with inflation. We asked experts whether they thought the core personal consumption expenditure inflation rate would either drop below zero (i.e., deflation), stay between 0 and 3 percent — where it has consistently sat for decades — or rise above 3 percent by the end of 2022. Our sample of economists thought there was an 80 percent chance it would stay in its usual range, with a 13 percent chance of inflation over 3 percent and a 7 percent chance of deflation. So despite concerns that the Federal Reserve’s monetary response to the coronavirus could cause runaway inflation or deflation, the consensus is that inflation rates will remain in a relatively normal range.

That measured confidence did not extend to overall economic growth, however, as the panel’s forecasts for GDP barely budged over the past two weeks. The average estimated second-quarter (annualized, quarter-over-quarter) GDP growth in the survey is now -26.1 percent, with an 80 percent confidence interval between -35 percent and -18 percent. While respondents thought there was slightly more of a chance that GDP recovers sooner than 2022, they increased the odds of it happening by the middle of 2021 only from 11 percent to 12 percent:

Although respondents think GDP will probably be growing at the end of the year (with an expected final-quarter growth estimate of +4.2 percent on average), that number is unlikely to be large enough to offset the economic damage from when the recession began — although it also depends, of course, on how much the economy recovers in the third quarter. And uncertainty about GDP remains as high as ever. In fact, the average range between the upper and lower bounds of respondents’ 80 percent confidence interval about second-quarter GDP growth increased from 17.5 percentage points two weeks ago to 18.2 points this week.

Karen Dynan, an economics professor at Harvard University and former chief economist at the U.S. Department of Treasury, said she remained pessimistic about second-quarter GDP because the reopening of the economy was mostly unfolding the way she expected. The more difficult exercise, she told us, was trying to predict what will happen in the second half of the year because there are still so many unknowns — like our limited understanding of the virus, a lack of information about how consumer and household finances are being affected, and how effective the government will be at implementing public health measures that make people feel comfortable leaving their homes again.

So while the jobs report appears to have made many of the respondents in the survey think the recovery won’t be as painful as they initially predicted, they also don’t think it’s a sign that the economy will be bouncing back quickly. Overall, the economists stressed that we shouldn’t read too much into one good jobs report — and that the jobs report provided only a small measure of hope to an economic outlook that remains bleak otherwise.

“In the recovery, we will see some months and quarters of much improved economic conditions, but this still does not mean that the economy is back to health,” Wright said. “1933 was a year of great growth, but it was still in the depths of the Great Depression.”