On Monday night, the winless Miami Dolphins were headed toward halftime with a surprising two-touchdown lead. But for a Miami team that is widely believed to be tanking, leading the heavily favored 2-4 Pittsburgh Steelers may not have been a cause for celebration. Beating the Steelers might have boosted short-term morale among the players and coaching staff, but with the hapless Cincinnati Bengals also winless on the season, a victory could have potentially derailed the Dolphins’ plans for landing the No. 1 overall pick in next year’s draft. So with 26 seconds left before halftime, Miami general manager Chris Grier may have felt some small sense of relief after the defensive play that his head coach, Brian Flores, dialed up on third and 20 for the Steelers.

The Steelers lined up with three wide receivers and sent two out to the right side of the formation. Miami blitzed with eight pass rushers, leaving just three defenders in the secondary to cover the three receivers. With no help from a fourth defender, the defensive backs played well off the line of scrimmage to protect against deep routes. After the snap, right cornerback Xavien Howard and safety Nik Needham failed to switch responsibilities for the crossing receivers on the strong side of the formation. In the slot, JuJu Smith-Schuster ran a vertical route upfield and slightly toward the sideline, while Diontae Johnson, who was lined up further behind the line of scrimmage at flanker, ran a shallow slant toward the wide-open middle of the field. The result was an easy pitch and catch for a touchdown.

The defensive play call is uncommon enough, and the result so bad, that some commentators on Twitter immediately accused the Dolphins coaches of being complicit in the tank. After reviewing the tape, others disagreed, arguing that cover-zero blitzes — plays on which there is one coverage defender per receiver, and the rest of the defense rushes the quarterback — are poor evidence of tanking since they’re occasionally employed by successful teams. Who is right? Was sending eight rushers on third and long a viable strategy, or was it a questionable call made by a Miami team that should be under suspicion of in-game tanking?

The evidence suggests that the call was of dubious value if a team is attempting to win a football game. Rushing eight or more is actually quite rare in the NFL. Teams rushed eight players just 110 times on all downs and distances during the regular season from 2016 through Week 8 of 2019. On third-down passing plays over that same period, teams rushed eight or more just 33 times. And on third and 11 or greater — the situation most similar to the one the Dolphins faced — there have been just two plays called with eight or more pass rushers. And that’s counting the play run by Miami on Monday night.

Regardless of the call’s frequency, we can say with confidence1 that dialing up an eight-man rush on third down is the worst play that defensive coordinators can call if they want to prevent their opponent from scoring. 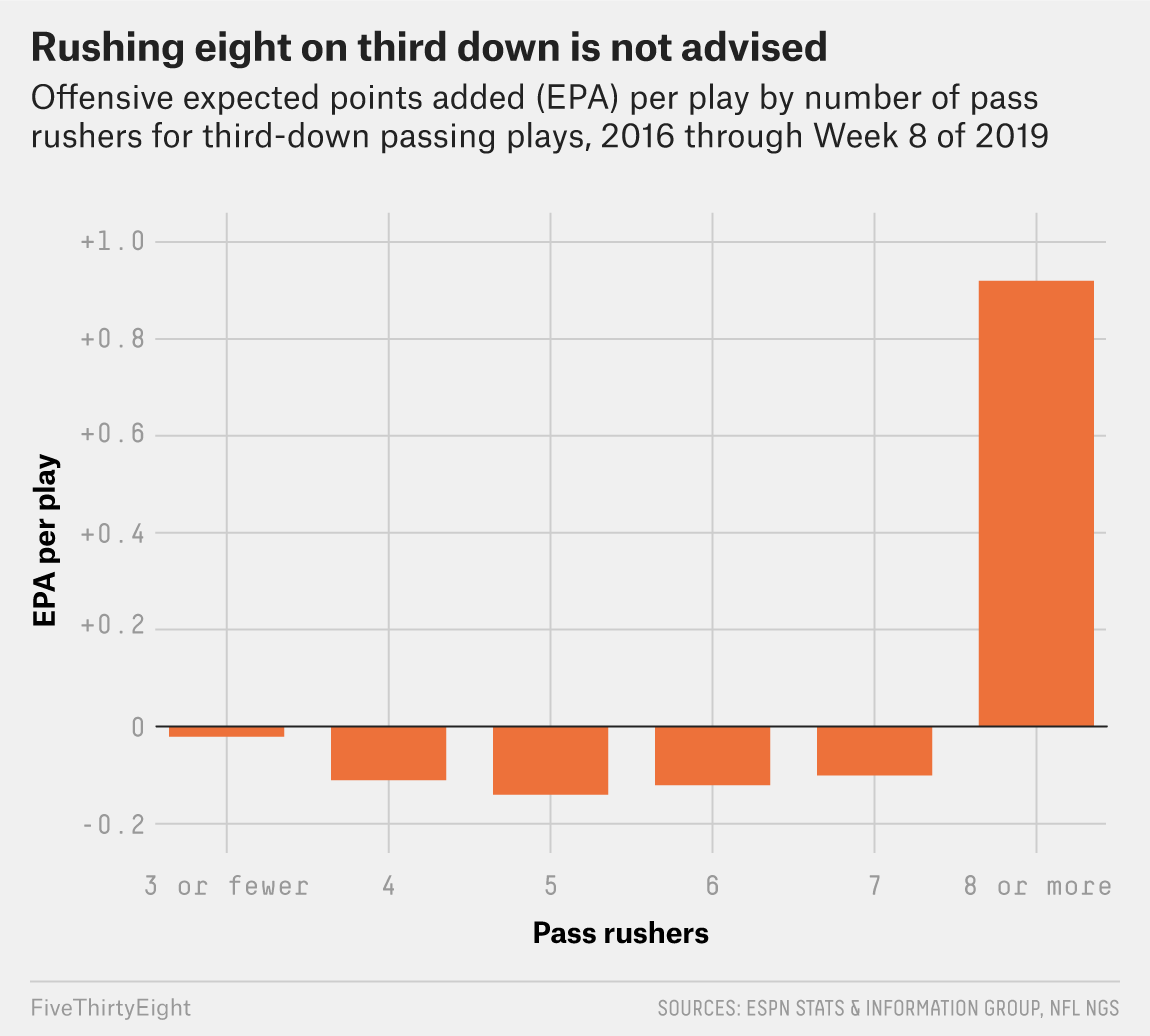 Third down is typically advantageous to the defense. On average, plays called with any combination of three to seven defenders rushing the passer cause the opposing offense to accrue negative expected points added.2 Only when defenses decide to rush eight and drop three into coverage does the offense regain the advantage. On those plays, the script gets flipped, and offenses net nearly a point per snap over expected.

Some have argued that the Miami play was sound based on the theory that an all-out blitz forces the quarterback to get rid of the ball more quickly, leading to shorter passes. But that’s not what we find. It turns out that if you want to minimize an offense’s depth of target, it’s better to drop eight or more into coverage than to rush eight.

Fans and analytics-minded observers, in particular, often scream and yell for NFL teams to be more aggressive, but in this case, conservatism appears to be the better choice. Especially on a third and long like the Steelers faced against the Dolphins, who were up two scores with less than 30 seconds remaining in the half, calling a high-risk, low-reward play doesn’t make a whole lot of sense. Unless, of course, the goal wasn’t actually to win. In that case, it was the perfect call.