Three NFL teams have held a lead in every game they’ve played this season: the 10-2 San Francisco 49ers, the 8-4 Kansas City Chiefs and a 3-8-1 Detroit Lions team stuck deep in the NFC North basement.

NFL observers around the country got a great look on Thursday at how the Lions blow leads. David Blough — an undrafted rookie making his NFL debut and one of 11 quarterbacks Detroit has rostered this year — led Detroit to a 20-17 fourth-quarter lead over the Chicago Bears. When the Bears took back over at their own 10-yard line with 6:40 left in the game, a penalty backed them up to their own 5. In that moment, according to ESPN’s win probabilities, the Lions had a 76 percent chance of winning.

Instead, the Detroit defense surrendered 100 offensive yards and a touchdown. Then, Blough drove the Lions to within 26 yards of the go-ahead score before taking an ugly sack and throwing a game-ending pick. They had made their traditional Thanksgiving game blessedly interesting, but they had also turned a likely victory into a gutting defeat.

It was far from the first time this season.

In fact, the Lions have held a winning position late in many of their nine non-wins. According to ESPN’s win probability model, the Lions averaged a peak WP of 75.8 percent in these games — and in five of them, the Lions had a WP of more than 60 percent with less than a quarter to play: 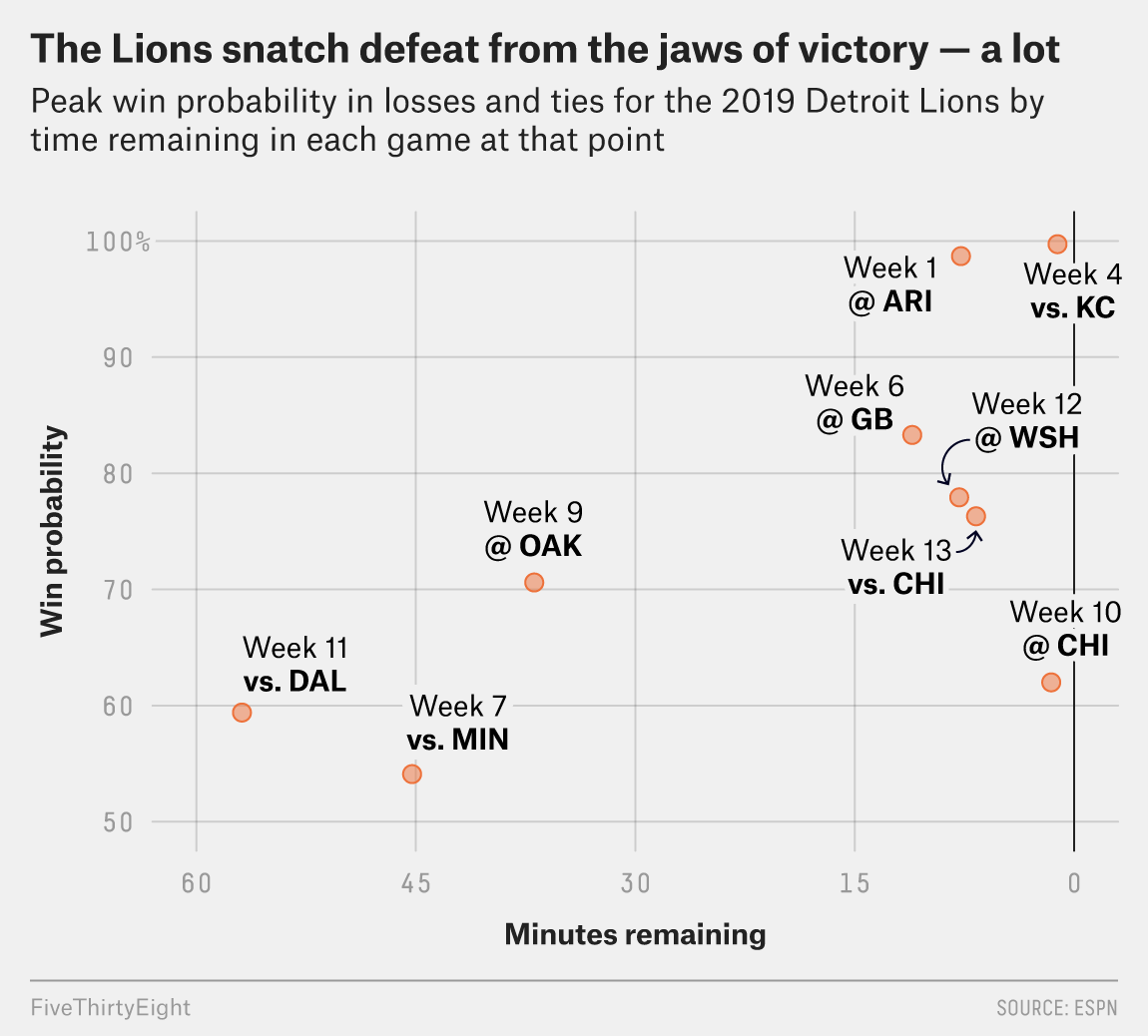 How have the Lions managed to squander many almost-wins?

It’s tempting to point at a string of bad injury luck. Losing franchise quarterback Matthew Stafford — who hadn’t missed a start since the 2010 season — was compounded by losing tailback Kerryon Johnson, a second-round pick in 2018. On the defensive side of the ball, a head-scratching decision to trade safety (and defensive captain) Quandre Diggs was compounded just over a week later by an injury to his successor, Tracy Walker. There were also cluster injuries to the defensive line, resulting in a combined 32 player-games missed by Damon “Snacks” Harrison, Trey Flowers, Mike Daniels, Da’Shawn Hand, Romeo Okwara, Kevin Strong and Austin Bryant.

But all of those players missed all of those games. Head coach Matt Patricia can’t blame Stafford’s absence for the in-game collapses, not when Blough and Jeff Driskel have been good enough to give Detroit an upper hand.

Though a pair of high-leverage hands-to-the-face penalties against Flowers arguably cost Detroit their game against the Green Bay Packers, penalties haven’t been the biggest problem, either. Per NFLPenalties.com, 27.3 percent of the Lions’ charged penalties have occurred in the fourth quarter or overtime, barely any higher than the league average to date.1

Similarly, though Blough’s interception sealed Detroit’s fate on Thursday, it hasn’t been turnovers that have done the Lions in. Blough threw his pick after the Lions had already blown a 20-17 fourth-quarter lead — just as Driskel throwing picks to end each of Detroit’s last two drives against Washington came after letting the worst offense in the NFL equalize with less than two minutes left.

What we’re left with, then, is this: The Lions’ defense can’t stop anybody late. By defensive splits, Detroit’s already-iffy pass defense falls apart after halftime:

Overall, the Lions’ passing rate stats allowed are brutal: They rank 26th in the NFL in passer rating allowed (99.7) and 28th in adjusted net yards per attempt (7.7). But they’ve been significantly worse in the second half, allowing a higher completion rate and more touchdowns on longer pass attempts.

In fact, according to Pro-Football-Reference.com’s advanced pass-defense stats, the Lions’ secondary is being attacked more aggressively than any other team in the league. With a league-deepest average depth of target2 of 10.1 yards and a league-most 2,255 air yards3 allowed, the Lions secondary has been mercilessly picked on.

Let’s rewind to Week 4, when the Lions had a probability as high as 99.9 percent of beating one of their fellow has-held-a-lead-in-every-game teams: the Chiefs. Patricia’s defense bottled up quarterback Patrick Mahomes, holding him without a touchdown pass for the only time this season and to his second-lowest passer rating of the year.

NFL analysts credited Patricia with an effective, unorthodox game plan: dropping seven or eight defenders into coverage, forcing Mahomes to hold onto the ball and make perfect throws. The gambit worked, prompting The Washington Post’s Adam Kilgore to make an unwittingly prescient proclamation: “[Detroit’s] defense ranks among the NFL’s best, especially if you discount the fourth quarter of their Week 1 tie in Arizona.”

If you discounted all their fourth quarters, the Lions would have a winning record right now.4

After the Chiefs game, Patrica appeared eager to repeat that game plan week after week. But with heavy losses to the defensive front and secondary, Detroit’s blanket coverage has been shredded to cheesecloth. The Lions have blitzed on just 16.4 percent of opponent dropbacks this season, second-lowest in the NFL, and generated quarterback pressure at the ninth-lowest rate in the league. They’ve intercepted just 1.1 percent of opponent passes, second-lowest, while allowing a passing touchdown rate of 5.6 percent, sixth-worst in the league.

That overall ineffectiveness is magnified dramatically by the number of snaps the defense has played (798), sixth-worst in the league. Whether it’s sheer physical exhaustion, or that Patricia’s schematic bag of tricks is only three quarters deep, it’s no wonder that Detroit’s patchwork defense falls apart at the end of games.

Patricia’s task for the rest of the season should be finding ways to keep his offense on the field and to get his defense off it. After that, he and general manager Bob Quinn will have their personnel work cut out for them — assuming they get a third season to upgrade all these fourth-fifths-of-victories into whole ones.