Seth MacFarlane’s “Ted 2” came out in theaters Friday. Early reviews are not great, but I doubt many people are surprised by that. The thing with the comedy of Seth MacFarlane — the guy behind “Family Guy,” “American Dad!” and “The Cleveland Show” — is that you know exactly what you signed up for: broad, slightly-above-average entertainment.

MacFarlane, for better or worse, has been an anchor of TV comedy in the U.S. since the waning days of the Clinton administration. You can make an argument that the writing on his comedies is lazy — in fact, I would make that argument: His stuff can be very funny, but it’s constantly getting mired in his weird obsession with punching down. But by sheer output alone, the man’s a machine. You may not like what that machine creates, but since 1999, “Family Guy,” “The Cleveland Show” and “American Dad!” have cranked out something like 200 hours of television. You don’t get there without working hard.

To make some sense of this output, I plotted out the IMDb episode score for all three MacFarlane-conceived animated series. The workload is pretty immense, when you lay it all out here, especially because MacFarlane is the voice actor for several characters on the shows. I also plotted the “Cosmos: A Spacetime Odyssey” series, which I only just realized MacFarlane produced. 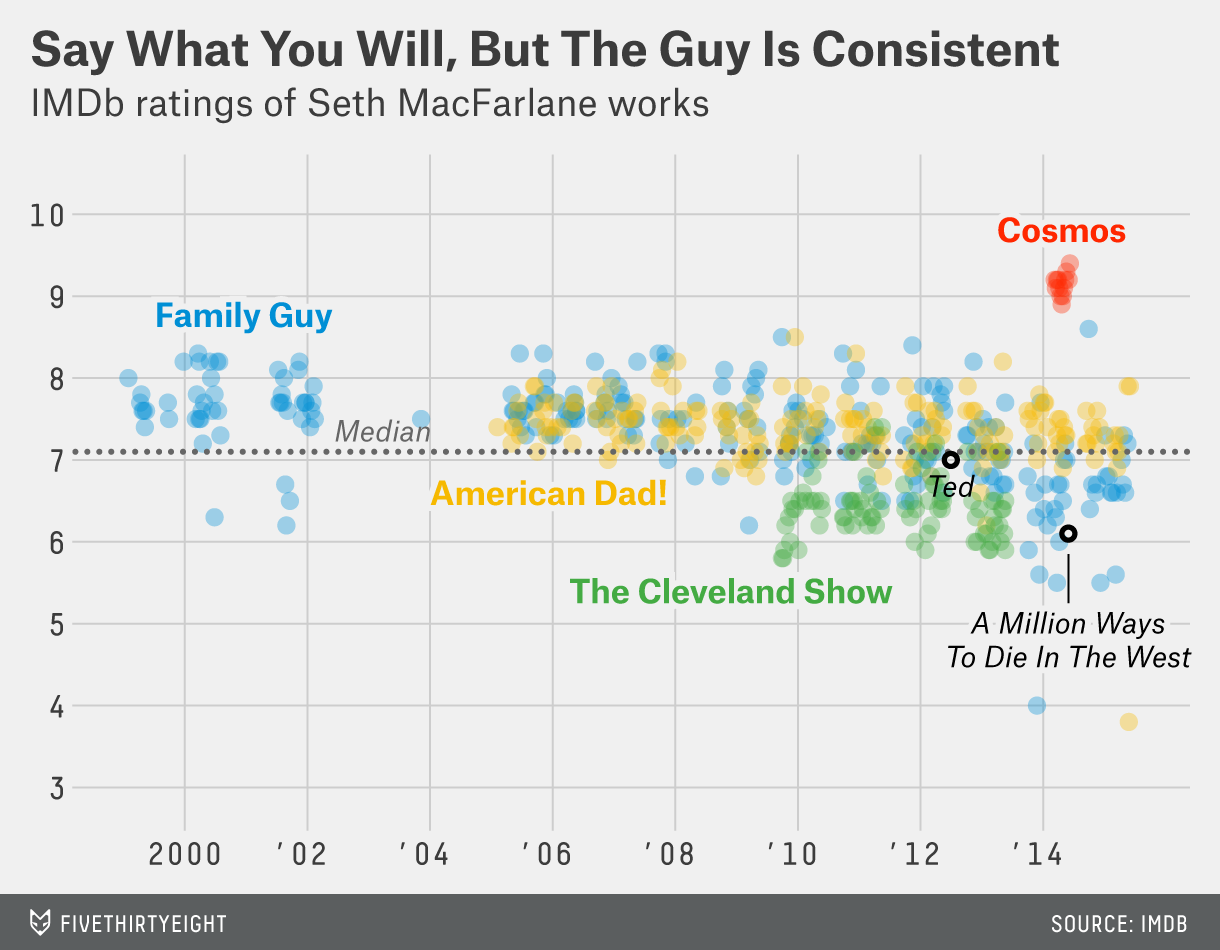 There are a couple of things to keep in mind here, mainly that IMDb ratings — which go from 0 to 10 — tend to skew high. A quick inventory of titles released from 2000 to 2015 with more than 100 ratings shows a median episode rating of 7.1. Just about 70 percent of the MacFarlane shows are above that median score. But when we take a rolling average, we can see his stock drop slowly over time toward the median. He’s not getting better.

“American Dad!” is probably the most consistent MacFarlane product. The sheer longevity of “Family Guy” means that episode ratings are getting increasingly erratic. “The Cleveland Show” was consistent, but poorly received, with a lot of episodes below the 7.1 median.

Weirdly — and this is rather timely, with “Ted 2” in theaters now — MacFarlane’s movies tend to do worse than his shows. Both “Ted” and “A Million Ways To Die In The West” were below what we’d otherwise expect from a typical MacFarlane product at the time of their release.

But he’s capable of making good stuff. I really have no idea how MacFarlane managed to shepherd “Cosmos: A Spacetime Odyssey” — a reboot of a 1980s show hosted by Carl Sagan — through to completion, but the Neil deGrasse Tyson-hosted miniseries managed to crush it in terms of fan ratings.