History was made on Sunday Night Football, but likely not the kind Cleveland Browns fans were hoping for. With 9:45 left in the fourth quarter and trailing 17-13, the Browns advanced to the Rams’ 41-yard line. A first-down run by Nick Chubb and two subsequent passes by Baker Mayfield netted Cleveland a single yard, and head coach Freddie Kitchens was faced with a difficult fourth-and-9 decision. In response, he dialed up a play call that is unprecedented in recorded NFL history: a draw.

A draw play is designed to make the defense believe that a pass is coming, but instead results in a delayed handoff to the running back. The version the Browns ran gained just 2 yards, so Cleveland turned the ball over on downs. To be fair to Kitchens, it was a bold call in adverse circumstances. The analytically inclined are sometimes guilty of screaming at the TV for teams to be aggressive on fourth down and then — if the play is unsuccessful — immediately turning around and loudly complaining about the play call. But even given the results-oriented bias of the NFL fanbase, a draw play on fourth down and long is still a very rare and deeply contrarian move.

Since 2006 — the first year ESPN began tracking play types — teams have dialed up a draw just 26 times on fourth down, including the Browns’ failed attempt. In that same period, no team outside of Cleveland has called a draw on fourth down with more than 7 yards to go. Among this small sample, just one draw has successfully converted to a new set of downs with more than 3 yards to go — and the quarterback responsible was noted gridiron sorcerer Ryan Fitzpatrick back when he was starting for the Buffalo Bills in 2011.

Still, faulting Kitchens for calling a draw just because few have been called historically from that distance might be unfair. Draws work more often than not when they are called on fourth and short, for instance.1 And the conversion rate on a slightly more recent sample of plays — there have been 16 since 2009, the year our dataset begins — is a robust 62.5 percent, so the play can work in the right situations. Meanwhile, the success rate for all fourth-down plays with exactly 9 yards to go — the same distance Kitchens was faced with — is an anemic 35.4 percent. It’s hard to blame a specific play type when the odds against success are stacked so high.

This made us wonder if there were play types that have historically been successful in fourth-and-long situations. Historical charting is somewhat limited in the NFL, but we found five other play types we could compare to the draw across the period spanning from 2009 to 2019. Sample sizes are notoriously small for fourth- and- long plays due to the NFL’s aversion to aggressive play calling, but among the play types for which we have data, play-action is the most common. 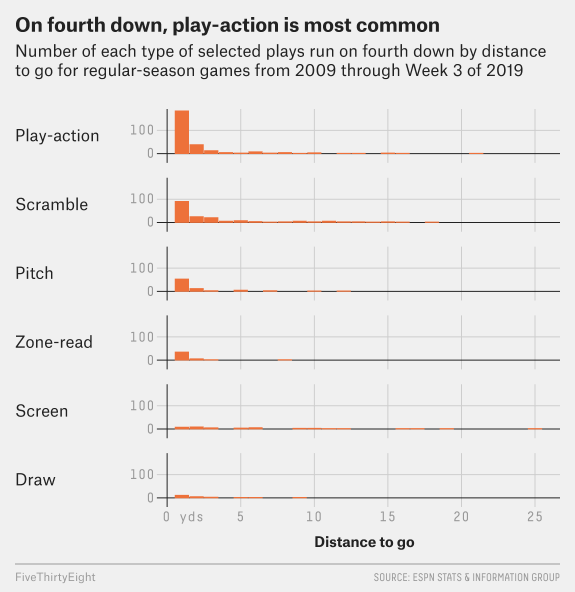 There simply isn’t a lot of evidence to guide decision making in these situations. But if we look at the relative frequency of each type of play call and break each out by success or failure, there is a play type that historically has seen reasonable success on fourth and 5 or more: the screen pass. 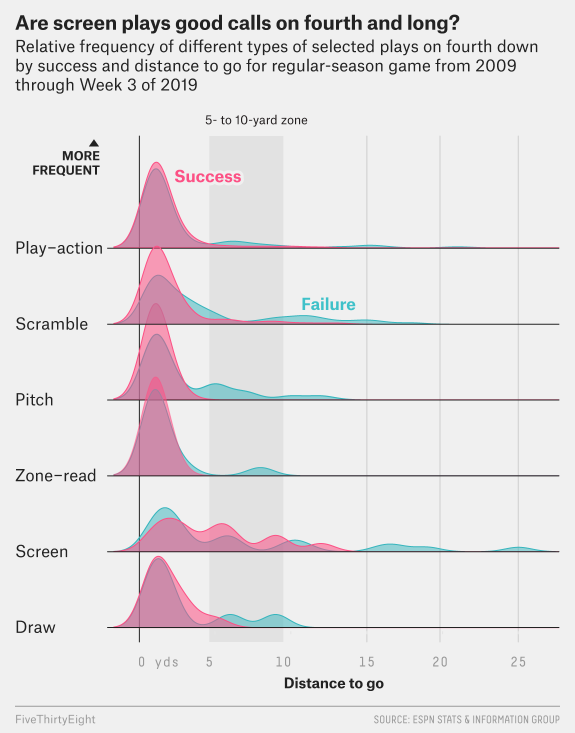 Screen passes are short passes to a receiver that start off looking like deeper passes or runs. Linemen — usually the center and two guards — begin the play blocking as normal but will release their defenders in an attempt to get them to overcommit to rushing the quarterback. A well-executed screen usually requires the QB to wait until the opposing linemen are almost on him before he tosses the ball to the receiver. Ideally, the scrum of suddenly free offensive linemen then begin to rumble downfield in search of a smaller linebacker or defensive back to block into the turf.

Acknowledging the fact that we have limited charting of play types, the screen is the only play type that has been successful the majority of the time on fourth down and between 5 and 9 yards to go. The sample size is admittedly tiny — just 10 plays — so any notion of statistical significance goes right out the window, but teams were able to successfully convert a first down on six of the 10 attempts, good for 20 percentage points over league average for the given down and distance.

Perhaps the deception afforded by convincing the defense that a long pass is coming improves the play’s outcome. It’s interesting to note that of the play types under consideration, the screen is the worst performing on fourth and short — and on fourth-down plays overall.

For screens to succeed, the offense needs defenders to respect the pass and try to sack the QB so space can develop for the receiver to operate. On fourth and short, considerations of containing the pass likely take a back seat to stopping the run. The numbers seem to bear this out. When all distances on fourth down are considered, the screen is the worst-performing play on average.

Kitchens and the Browns might have given themselves a better shot at extending their drive had they chosen another play type on Sunday. A screen might have led to a better pay-off for their aggressive play call. Then again, given the dearth of data we have to work with, perhaps it’s just noise.

The Browns Sure Have Been Bad