There’s little uniform, national-level data on how U.S. college graduates fare immediately after they finish school. That means it’s difficult to gauge students’ success by field of study across different colleges and universities, particularly within the first year after graduation.

To address the lack of data, the National Association of Colleges and Employers (NACE), a nonprofit professional association, commissioned a national survey on the outcomes of new college graduates. The data, which revealed some potentially surprising insights, was released Friday.

The association says this is the first survey of its kind, so it lacks historical context, but it does provide a snapshot of how today’s graduates are performing. The NACE found that about 80 percent of the class of 2014 that graduated with a bachelor’s degree had a “positive outcome” as of Dec. 30, 2014. (A positive outcome means working at a job, continuing one’s education or enlisting in public service.)

Perhaps the survey’s most noteworthy finding focused on the success rates of graduates from 31 academic disciplines. Although the distribution of starting salaries may not be surprising (the top three disciplines are engineering, computer science and engineering technology, and the lowest three are theology, recreation and psychology), the distribution of positive outcomes in general may be counterintuitive. 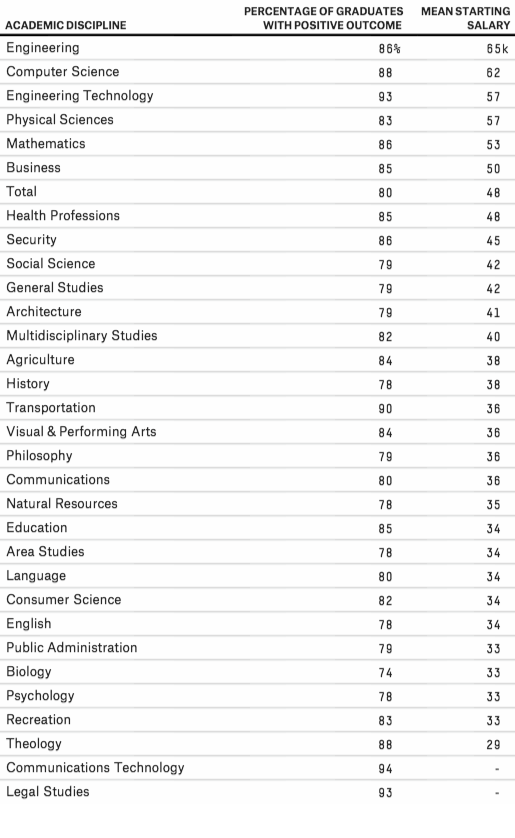 Again, it’s hard to put this information in context. How is the class of 2014 doing relative to its predecessors? Are the relative outcomes by academic discipline part of a broader trend, or a random anomaly? These are questions we can’t necessarily answer now, but the NACE plans to run this survey annually. As the authors wrote, the report “establishes a baseline that will allow for comparisons with future classes in a more definitive fashion.”