The Kansas City Chiefs aren’t known for their defense — or if they are, it’s for the wrong reasons. Ranked just 18th in yards per play allowed in the regular season — and with the baby GOAT at quarterback casting a long shadow — the defensive unit is more often seen as a different kind of goat. But in the AFC championship game against Buffalo, Chiefs defensive coordinator Steve Spagnuolo called a smart, cautiously aggressive game against an explosive Bills passing offense that helped keep the score close early and gave the Chiefs offense time to find its footing.

Bills offensive coordinator Brian Daboll made no secret about his infatuation with passing this season. On early downs, Buffalo was the pass-happiest team in the league, throwing the ball 14 percentage points more often than you would expect from a team in similar situations. Daboll’s aggressive calls helped the Bills deep into the playoffs, and they thrust quarterback Josh Allen into the league MVP conversation in the process. In a matchup against Patrick Mahomes and the Kansas City offense, Buffalo likely didn’t have much reason to hide its intentions anyway. If the Bills were going to win, it was probably going to be in a shootout.

[Some Coaches Shy Away From Risk In The Playoffs. Not Andy Reid.]

But maybe there’s something to be said for just a bit of deception. If fans knew the Bills love to pass, and football analysts knew the Bills love to pass, it’s a good bet that the Chiefs knew the Bills wanted to pass, too. As it turns out, Buffalo did not disappoint. Though the team jumped out to an early 9-0 lead, Allen handed off to a rusher just 11 times while dropping back to pass (or eventually run himself) on 82 percent of the team’s offensive snaps.1 But for nearly the entire game on Sunday, when Allen took the snap and hit his back foot to survey the field, he faced a gridiron lousy with Kansas City defensive backs.

Spagnuolo deployed six defensive backs more in the AFC championship game than any other team has in a single game2 since he became the Chiefs’ defensive coordinator at the start of the 2019 season. All told, the Chiefs used a 4-1-63 personnel package on an incredible 75 percent of their defensive snaps. But Spagnuolo wasn’t selling out to stop the pass completely. Instead of using three or four smaller cornerbacks to cover Stefon Diggs and the other Bills wide receivers, Spagnuolo trotted out bigger-bodied safeties to hedge his bets and help defend the run — just in case.

There were four of those big safeties on most plays: Tyrann Mathieu, Juan Thornhill, Daniel Sorensen and L’Jarius Sneed. It wasn’t until late in the third quarter, when Mahomes and the Chiefs had taken a commanding 31-15 lead, that Spagnuolo ultimately switched to a more aggressive three-cornerback/three-safety form of coverage designed almost exclusively to stop the pass. 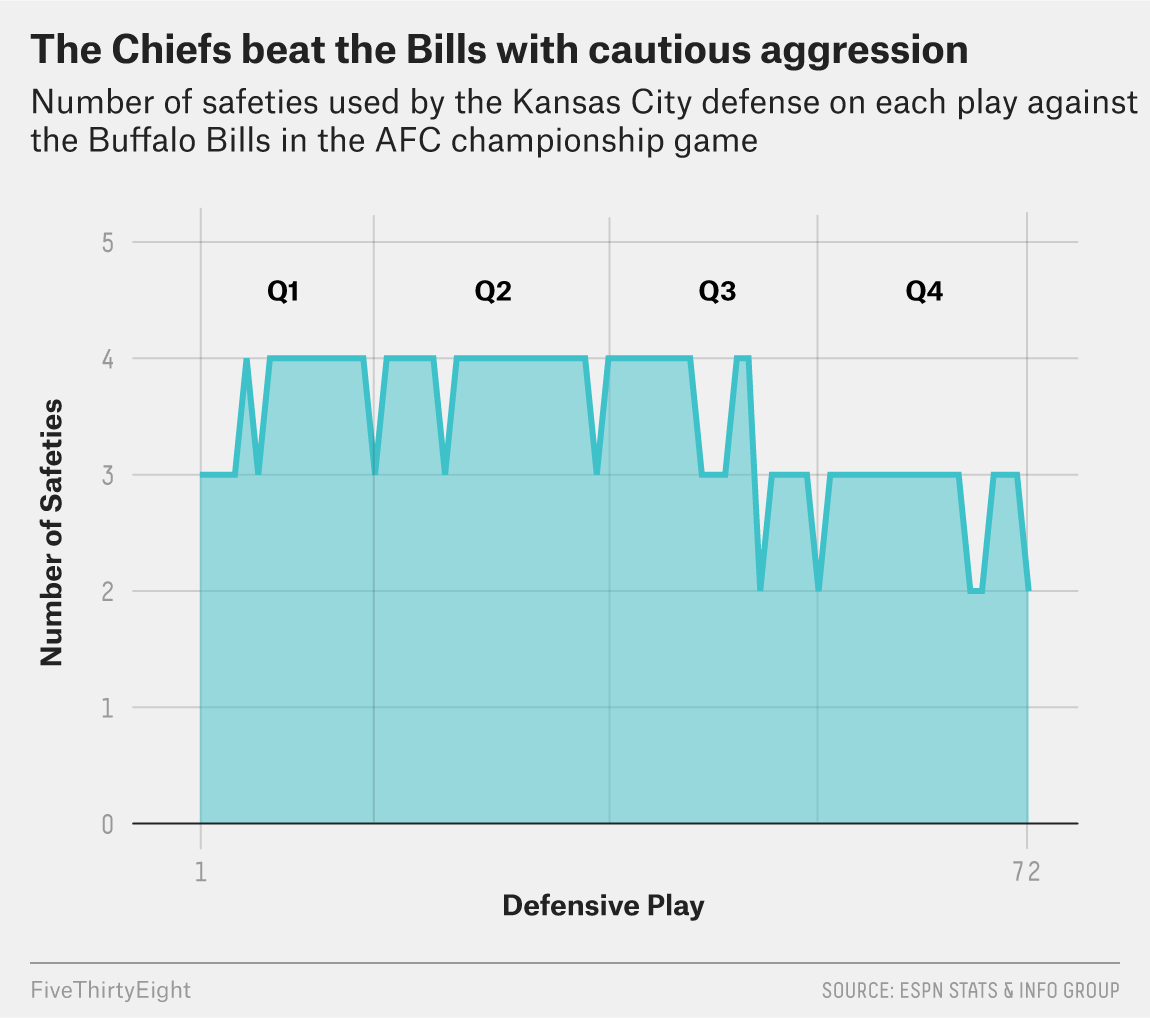 The Chiefs’ defensive strategy appears to have been to try to slow down the Bills and sow confusion for Allen. The Bills struggled when the passing game was thrown off rhythm in 2020. Over the course of the season and into the playoffs, the Bills averaged 3.05 seconds from snap to throw on passing plays.4 In the 11 games in which the Bills met or beat their average of 3.05, they went undefeated, and Allen averaged 8.1 yards per attempt. In the games in which Allen held the ball longer than the team average, Buffalo went 4-4, and Allen’s yards per attempt dropped almost a yard to 7.2.

[Can The Kansas City Chiefs Keep Getting This Lucky?]

If Spagnuolo’s goal was indeed to leverage his half-dozen DBs to inhibit Allen’s ability to process the field, it seems to have worked. Allen’s average time to throw was well above his norm at 3.16 seconds, and he threw for just 6.0 yards per attempt. Spagnuolo’s decision to switch from big safeties to smaller, more sure-handed cornerbacks at the end of the third quarter was impeccable as well. Just a few snaps after rotational cornerback Rashad Fenton was put in, he caught a tipped pass for an interception in the red zone that all but sealed the game.

And while the Chiefs had experience running 4-1-6 defensive looks under Spagnuolo previously,5 it was no sure thing that he would embrace the move so aggressively. Spagnuolo was one of the most conservative coaches in the NFL in 2020, deploying defenders to the box to stop the run at a rate well above expected. But he threw that all aside against the Bills.

If Kansas City goes on to win a second straight Super Bowl, Spagnuolo and his defense will deserve a healthy measure of credit for helping to hoist another Lombardi Trophy.