Nearly three years ago on a rainy November night in Cleveland, it seemed as though the Chicago Cubs were poised to begin a dynasty. But that promise is gone. The Cubs had an optimistic 69 percent playoff probability on Sept. 17, but a four-game sweep at the hands of their archrivals, the St. Louis Cardinals, all but ended their hopes, and they were eliminated from postseason contention on Wednesday night. And as the Cubs collapse, the Cardinals are headed back to the postseason for the first time since 2015.

While Cubs manager Joe Maddon is oft-cited as a possible culprit, he is a useful scapegoat: There is plenty of blame to be shared. And perhaps the most consequential area separating the Cubs and Cardinals is pitching. No team has been more productive in drafting pitchers than the Cardinals have been since 2012 — and few clubs have been worse than the Cubs.

Since Theo Epstein was hired to lead the Cubs baseball operations in October 2011, the Cardinals’ drafts lead baseball in pitching wins above replacement produced (29.2 WAR from 117 pitchers drafted and signed), while the Cubs rank 25th (2.2 WAR from 105 pitchers drafted and signed), according to Baseball-Reference.com data analyzed by FiveThirtyEight.1 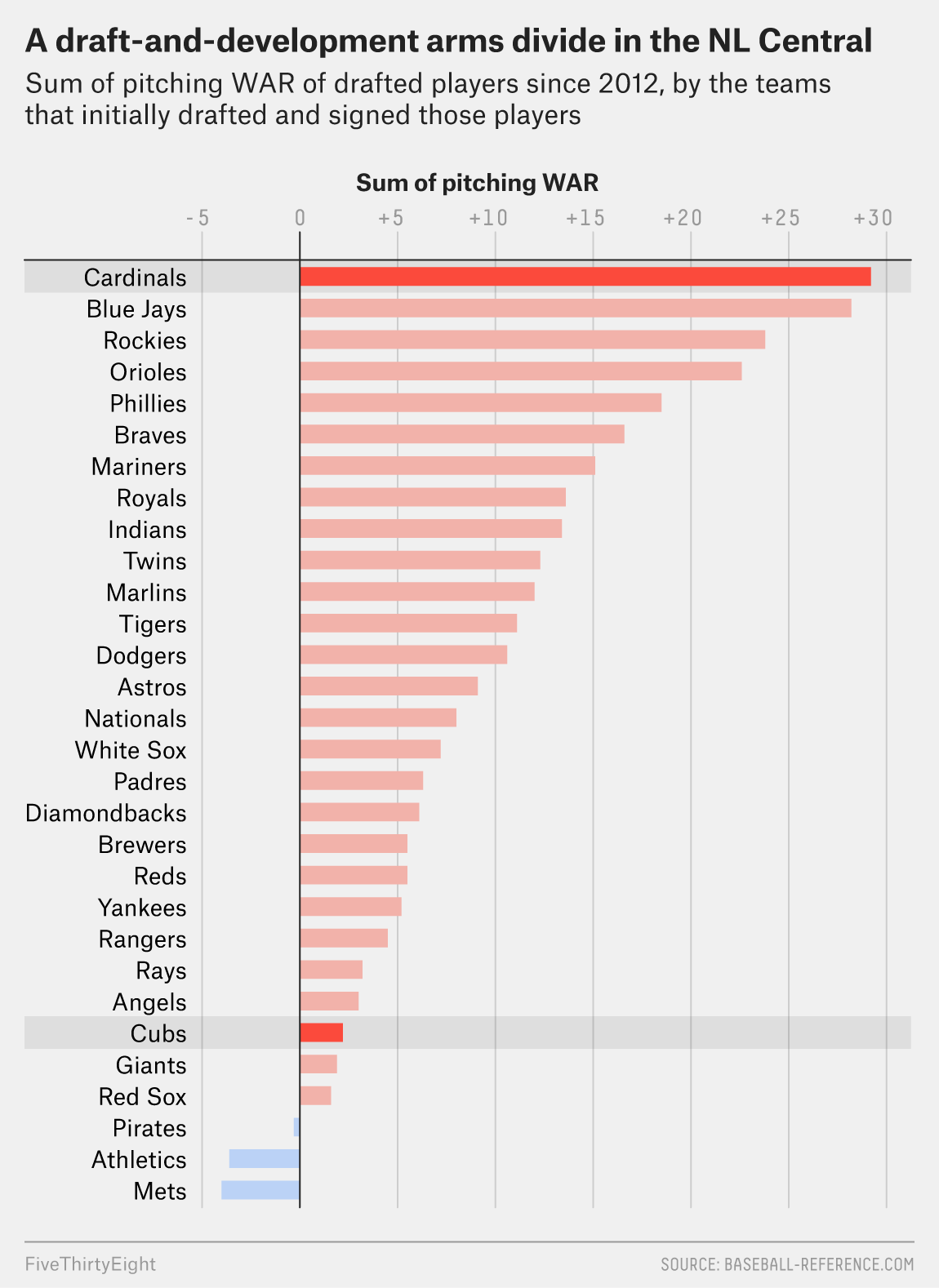 A significant part of the Cubs’ rebuilding strategy was to use their premium picks, the spoils of tanking, on position player prospects — and then fill in pitching gaps via free agency with their big-market dollars and through trades. But Chicago produced zero pitching WAR — or worse — to date from six of the seven drafts from 2012 to 2018, placing substantial pressure on the organization to fill the voids externally. Free agency is an inherently risky vehicle to improve a team, especially as players are getting younger, and the Cubs have the oldest collection of pitchers in the majors with an average age of 31.1 years.

No club has spent more payroll dollars on pitching this year than the Cubs ($128.4 million), and with a modest return from that investment: The Cubs are just 11th in wins above replacement from pitchers. External additions of Yu Darvish, Craig Kimbrel, Cole Hamels and Tyler Chatwood each have pedestrian fielding-independent pitching marks; none has a mark better than 4.18 on the season. Epstein’s quest to “find pitching,” words he scrawled on an office white board in 2016, has also cost the Cubs treasured prospects in Gleyber Torres2 and Eloy Jimenez.3

Today’s model organizations don’t just tank to successfully rebuild (see the Houston Astros) — and many don’t even have to tank (see the Yankees, Rays and Dodgers). They’re creating draft-and-develop success stories. Those clubs have proven that they can draft well without having to pick near the top of the draft, and they can get more out of the big-league pitchers they acquire, like Houston has done with Justin Verlander and Gerrit Cole.

The Cardinals, with only one losing season this century, haven’t needed to resort to tanking. They’ve used their drafts to select quality arms — and the value of their homegrown pitching was on display last weekend in Chicago.

On Thursday, Jack Flaherty helped St. Louis to a series-opening win with eight dominant innings. Flaherty — drafted by the Cardinals with the 34th overall pick in 2014 — has emerged as one of the best pitchers in baseball in the second half of the season, owning a 1.00 ERA over his last 15 starts. Michael Wacha, one of the Cardinals’ first-round picks from 2012, started Friday’s game and allowed one run over four innings. Then, rookie Ryan Helsley, a fifth-round pick in the 2015 draft, picked up the win with a scoreless inning in relief. Helsley has a 2.23 ERA through 36 1/3 innings this season. And on Saturday, 2016 first-round pick Dakota Hudson (16-7, 3.45 ERA this season) started a wild back-and-forth affair.

On the other side of that Saturday seesaw was Kimbrel, signed for $43 million in June to help Chicago’s struggling bullpen. With his team up 8-7, Kimbrel came in for the ninth inning and immediately allowed back-to-back home runs — a devastating sequence for the Cubs. Kimbrel owns a 6.53 ERA on the season.

The Cubs are well aware of their homegrown pitching deficiency and have taken steps in recent years to improve their draft-and-development capabilities. Prospect Brailyn Marquez is an early success story. Darvish has been excellent in the second half of this season, though he’s expected to be an ace, given his $126 million contract. But other clubs like the Dodgers, Cardinals and Astros have gotten ahead of, or have been ahead of, the Cubs.

While this group of Cubs will always be remembered for delivering a title, fans may be more focused today on the dynasty that might have been, had they followed the model of the rival Cardinals in drafting and developing pitchers.