One of the most interesting statistical nuggets I ran into while researching a piece about NHL goalies was the improvement in leaguewide goaltending over the past 30 years. It hasn’t just been a small improvement — the league’s save-percentage leaders during the 1980s and early 1990s put up statistics that would rate below-average in recent seasons.

Here’s the league’s average save percentage since the 1983-84 season, when the NHL began tracking shots against: 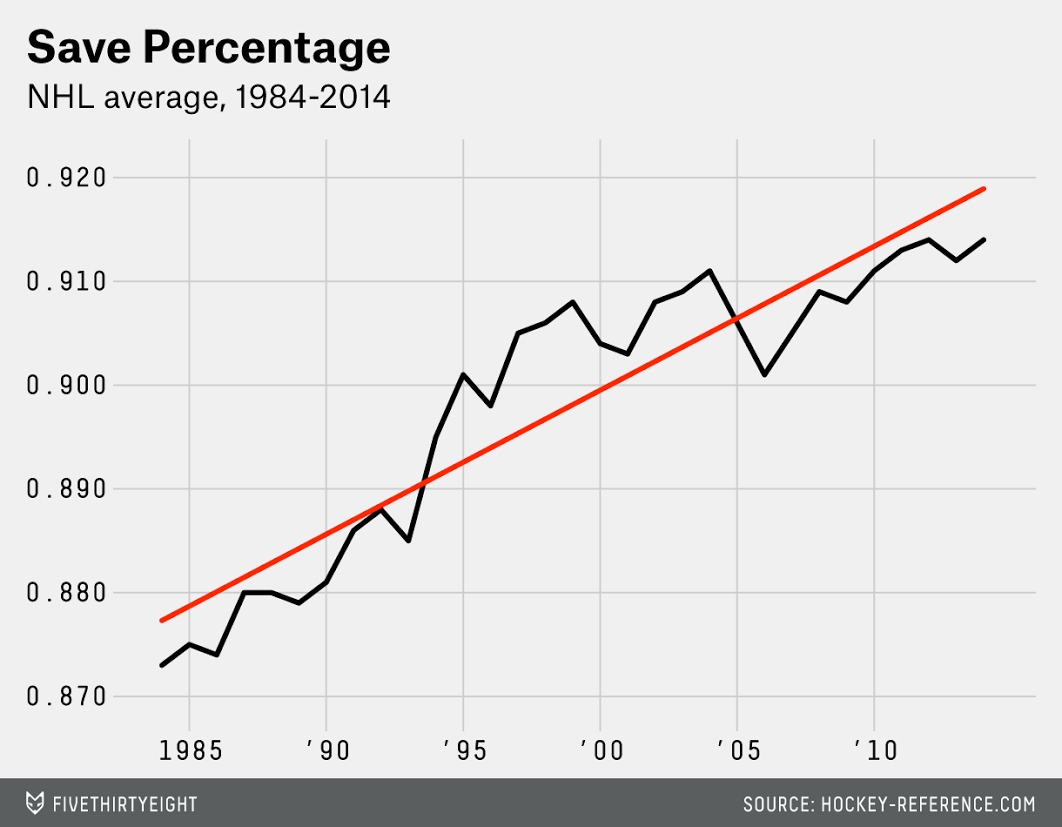 Save percentage rapidly increased during the so-called dead-puck era of the 1990s and early 2000s. It’s no coincidence that over that period, the NHL’s rate of scoring also dropped sharply. A lot of fans blame strategies such as the neutral-zone trap and left-wing lock for triggering the dead-puck era, but more of the blame belongs to better goalies.

As for why goalies are so much better now, well, that’s a subject of much debate in hockey circles. One of the most popular explanations is that the sheer size of goaltending equipment has exploded since the 1980s. That’s hard to argue when you look at how pads have grown over time. But since pad size first became a talking point in the mid-to-late 1990s, the league has gone to some lengths (no pun intended) to police the dimensions of puck-stopping technology — and it’s had scarcely any effect on save percentages.

Instead, I think a bigger reason save percentages improved so sharply in the 1990s was a dramatic change in the goaltending techniques being employed.

During the 1980s, the prevailing style was still the so-called stand-up method, in which a goalie largely remains upright on his skates while making saves, using his stick and skates to stop low shots. In the middle of the decade, though, goaltending phenom Patrick Roy made his NHL debut. Emboldened by recent advances in arm and chest protectors, Roy used a different technique — the “butterfly” — wherein the goaltender drops to his knees to make saves, effectively sealing off most shooting targets along the bottom third of the net.

Using the butterfly, Roy was sensational — he backstopped the Montreal Canadiens to the Stanley Cup as a 20-year-old in 1986 — and it wasn’t long before the butterfly style spread throughout the league. The effect was profound. Stand-up goalies who were the mainstays of the mid-1980s were almost completely phased out of the game within a decade, replaced by a younger generation who used the butterfly or at least a hybrid technique featuring butterfly elements.

In retrospect, this seems like an obvious tactic — it’s a goaltending truism that the majority of goals are scored on shots at or near ice level — but older equipment made dropping low a dangerous proposition. Once falling to the ice became safer, goalies no longer had to rely purely on reflexes, instead being able to stop a greater percentage of low shots on technique alone. It’s no surprise that save percentages skyrocketed when one of the most common subsets of shots suddenly became much tougher.

One final note: Watch the Wayne Gretzky highlight reel below and pay particular attention to the goalies in the early portion of the video, when the Great One was with the Edmonton Oilers.

Compared with today’s game, you can really see the difference in goaltending technique (notice how many of the goalies tried to stop Gretzky’s shots without dropping to the ice). Modern goalies are more athletic and mobile, and, yes, their pads are plainly bigger. But they’re also using a style much more grounded in the probabilities of where pucks are shot.