The biannual regular-season showdown between Duke and North Carolina is typically appointment television for men’s college basketball fans. Not so much this year,1 with the bitter rivals meeting unranked for the first time since 1960. The Feb. 6 matchup posted the lowest TV rating and audience for the series in at least 14 years.2

Unexpected power outages for college basketball royalty are neither exclusive to Tobacco Road nor to this season. But 2020-21 is shaping up to be a bizarre banner year for blue bloods.

“We’re not accustomed to losing, but we are,” said Duke coach Mike Krzyzewski — and that was before his team lost freshman star Jalen Johnson, who announced Monday that he was opting out of the rest of the season to focus on the NBA draft.

Krzyzewski unintentionally described the experience of many of the sport’s eminent powers. Staples of the Top 25 like Kentucky and Notre Dame3 rank near the bottom of their respective conference standings, with the former experiencing its lowest season win percentage since 1926-27.4 Duke and Michigan State5 will likely need to win conference championships to earn NCAA Tournament bids; it’s been almost 40 years since both failed to qualify. Indiana, one of five schools to win at least five national championships, is in jeopardy of missing its fourth consecutive tournament and has continued its seemingly annual tradition of considering firing its head coach. Even Kansas, a juggernaut with three No. 1 seeds in the past four tournaments, is looking at a potential 5-seed, which would be its lowest since 2000.

Of the top 20 teams ranked in the AP preseason poll, four6 are projected by ESPN’s Bracketology to miss out on the NCAA Tournament. Last week’s AP poll featured precisely none of the 10 teams with the most all-time AP poll appearances. If the season ended today, six of the top 10 teams with the most all-time wins as of the end of last season would watch the action in Indianapolis from their homes.

Sports have repeatedly proven that even the greats eventually fall, but this has been a uniquely strange season for college basketball institutions.

To measure how offbeat it has been, FiveThirtyEight looked at 40 years of Simple Rating System (SRS) scores through games of Feb. 16 for each of the 10 winningest teams in men’s Division I college basketball entering the 2020-21 season: Kentucky, Kansas, North Carolina, Duke, Temple, Syracuse, UCLA, Notre Dame, St. John’s and Indiana. The mean score this season for these 10 schools ranks as the third-lowest of any season since 1981-82, at just 12 points better than an average team.

The dropoff is even more pronounced when looking at just the top four schools, which happen to all be college basketball’s usual household names: Kentucky, Kansas, North Carolina and Duke. Each is a blue blood in both the figurative and the chromatic. But each also fell out of the AP Top 25 for the first time since 1961, and they have combined to win 53.9 percent of their games this season, the lowest collective percentage since the 1915-16 season. The mean of those four teams’ SRS ratings is only 13.2 points better than the average Division I team this season. That stands to be the lowest average score for the four programs since 1982-83. 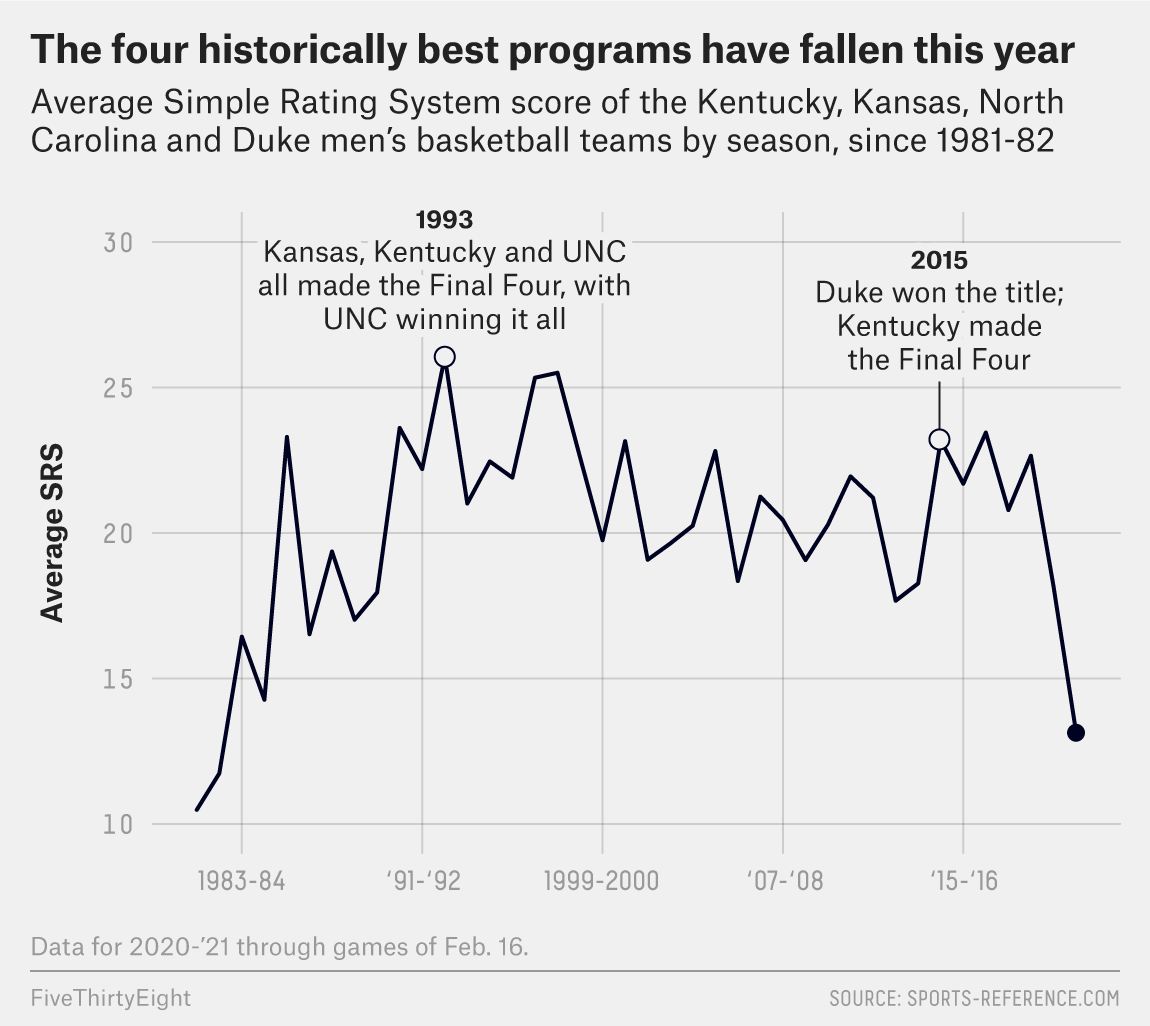 A variety of variables could be responsible for the blue bloods’ struggles, chief among them that the pandemic created an unprecedented number of scheduling obstacles. The start of the college basketball season was delayed by more than two weeks because of COVID-19, which also cut down on the amount of time teams could train together. Of course, that makes a difference for blue-chip-laden rosters, which are populated by players adapting simultaneously to the level of competition and to campus.

“You cannot play basketball when you don’t practice — I mean, that’s a fundamental thing that everybody knows,” Syracuse coach Jim Boeheim said after his team’s 1-point, season-opening win over Bryant, a member of the Northeast Conference.

Kentucky, Duke and North Carolina brought in the top three recruiting classes of 2020 according to Rivals.com. Each team ranks worse than 320th in KenPom’s experience metric. Kansas isn’t that experienced either, with the average player on Bill Self’s roster having 1.48 years of experience when this season tipped.

But continuity alone doesn’t guarantee a team’s success: Just look at Michigan State. The Spartans did lose longtime starter Cassius Winston and leading rebounder Xavier Tillman from last year’s team, but they also returned six players who started at least five games last season. Michigan State ranks 85th in minute continuity, higher than that of its 2019 Final Four team, but is on track to finish the season with its worst ever finish in KenPom’s team rankings.

College basketball fans love to set their calendars to chaos every March, but this year will be particularly confusing in that fans should anticipate seeing a host of different teams and some obvious absences. It will be a fitting bow on an irregular season devoid of a standard schedule. Teams like Gonzaga and Baylor have extended last season’s success, but many more unexpectedly foundered. The 2020-21 season will be remembered as one that provided more uncertainty than any before, so it stands to reason that college basketball fans should settle in for the unexpected until they hear otherwise.